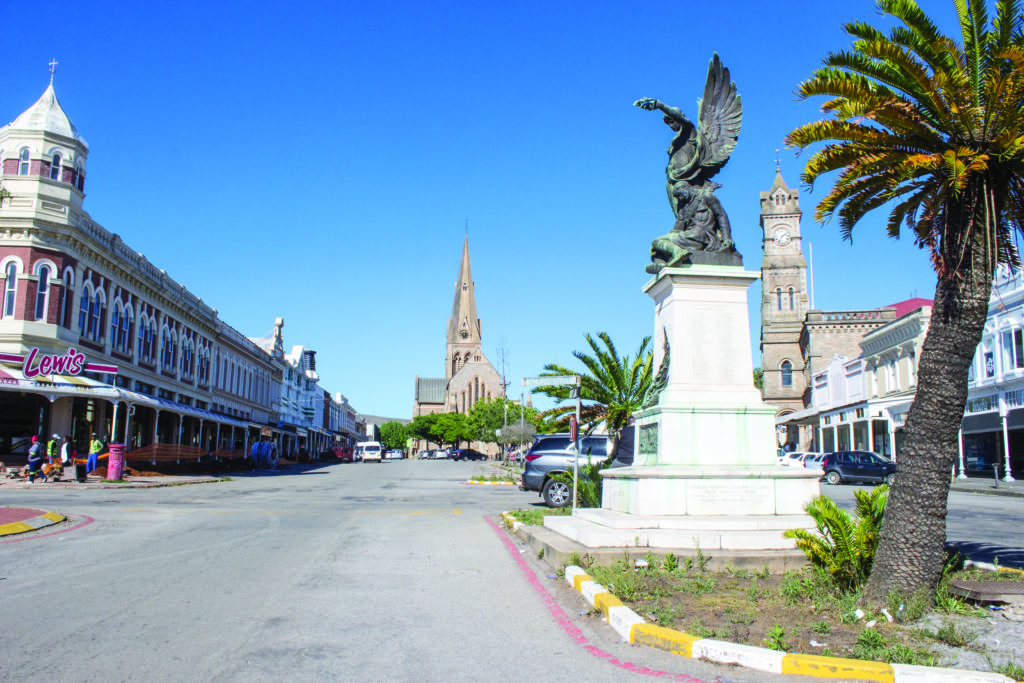 'Remembering these let no man think too highly of himself or meanly of mankind' is the inscription on The Great War memorial of the Angel over the wounded soldier in High Street. The names of the local men who died are inscribed on the north and south sides. 11 November 2018 is the 100th Anniversary of the end of World War 1. Photo: Sue Maclennan

The annual Remembrance Day Parade will be held in Church Square at 10.30am on Sunday 11 November 2018. This year’s parade will have particular significance as one of four events this weekend in Makhanda (Grahamstown) to mark the 100th anniversary of Armistice Day, the end of World War 1.

The first commemorative event is a performance by Saeculum Aureum (previously known as University Madrigal Singers) of a programme called ‘Better Times: Music for the Centenary of Armistice Day’ at 7pm on Saturday 10 November. The venue is St Bartholomew’s Church (12A Bartholomew Street). Admission is free and there will be a retiring collection.

Early the next morning, Sunday 11 November, at exactly 6am local time up on the hill outside the Monument, piping legend Chris Terry will be among a group of local bagpipers who will play the tune When the battle’s o’er. This is part of a worldwide event to mark the centenary of the end of World War 1. The time (6am local time) will be exactly 100 years after the guns fell silent.

At 10.30am will be the traditional Remembrance Day parade in Church Square.

“This Parade is held to pay tribute to, and remember all those who served their country so bravely and paid the supreme sacrifice. This year is a particularly special one in that we remember the centenary marking the end of World War I,” said MOTH member Graham Gooden.

The Kingswood College and St Andrew’s College bands will be on parade, as well as serving members of First City Regiment and the South African Police Service. The Parade includes a wreath laying Ceremony to honour the fallen.

Members of the public are welcome to attend this moving event.

“We would also encourage all those who have served in the armed forces to engage with our members after the Parade to find out more about the MOTH Order,” Gooden said. “Makanakop Shellhole meets on the second Monday of each month in the Drill Hall, First City Regiment, and new members are always welcome.” For more information email g.gooden@dsgschool.com

There will be Choral Evensong at the Cathedral at 5pm, on Remembrance Sunday.

St Andrew’s College has invited members of the community to attend a Special Choral Evensong in the St Andrew’s Chapel at 6.30pm on Sunday 11 November.

No fewer than 125 Old Andreans died in World War I.

“Many of them were present at the laying of the Foundation Stone of the present College Chapel in 1913, and little did they know that within five years, it would become a memorial to their lives and the price they paid in fighting for freedom and justice in the war,” said co-ordinator of the Evensong, Aidan Smith.

“The Choral Evensong is to commemorate the centenary of the end of World War I, and to acknowledge the memory of the boys whose memorial stained glass windows and plaques grace the Chapel.

“A group of Grade 8 boys, who have been researching the lives of the Old Andreans who died in the war, will be presenting short talks about these extraordinary young men.”

Smith says the music has been specially chosen for this Choral Evensong and includes God shall Wipe Away All Tears (from the Armed Man) by Karl Jenkins and the Welsh Lullaby Suo Gan sung by treble, John Marshall, and accompanied by the Chamber Choir and Bagpipes.