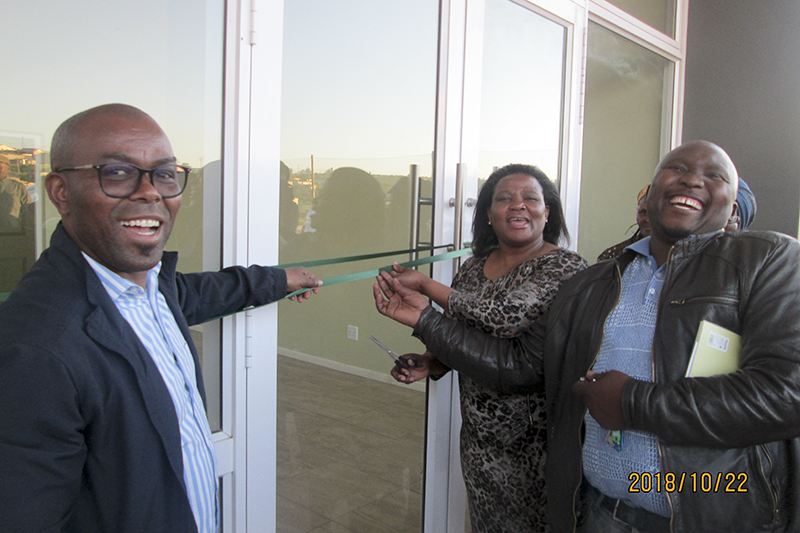 The opening was done in front of the residents of the area shortly before the start of an Integrated Development Plan (IDP) meeting in the new venue. The Executive Mayor was joined by Ward 7 Councillor Malibongwe Kubalo and municipal manager Moppo Mene in cutting the ribbon and officially presenting the R16 million facility to the residents.

The opening had been delayed for a while due to the lack of electricity at the venue; however, the municipality’s electrical department has since managed to connect power. Addressing residents at the opening ceremony, the Executive Mayor said it was a pleasure to announce that they would no longer hold their meetings in a tent, which cost the municipality thousands of rand to put up for each public meeting.

In the IDP meeting that followed, the opening the Executive Mayor gave clear feedback to the residents about issues that they had raised in previous IDP meetings. This was largely welcomed by the vocal residents who attended the meeting.

Issues raised by the residents included asking the municipality to ensure that there is a consistent supply of clean drinking water; an extension of what they referred to as matchbox houses in Hlalani; complete eradication of pit latrine toilets; alleviation of unemployment; interventions to address crime in the area; fixing and installing high mast street lights, fixing and paving roads and collaboration in curbing illegal dumping.

In response, the Executive Mayor said there are ongoing projects directed at solving some of community’s challenges.

In terms of water, the Executive Mayor said the upgrade of the James Kleynhans Water Treatment Works, due for completion in 2021, will address water outages not only in the area but in the whole of Grahamstown East. The Executive Mayor also explained that the Mayfield Phase Two housing project would commence once the upgrade of the Belmont Valley Waste Water Treatment Works is completed.

The Mayor also told the meeting that an application for RDP houses had been submitted to the department of Human Settlements for houses damaged during a natural disaster in 2008, adding that an official had been appointed to conduct a verification process. The municipal manager urged residents to report unresolved service delivery issues to the municipality until they are resolved.

Previous ArticleHeartbreak, humour in chronicle of love
Next Article French Sensei in SA