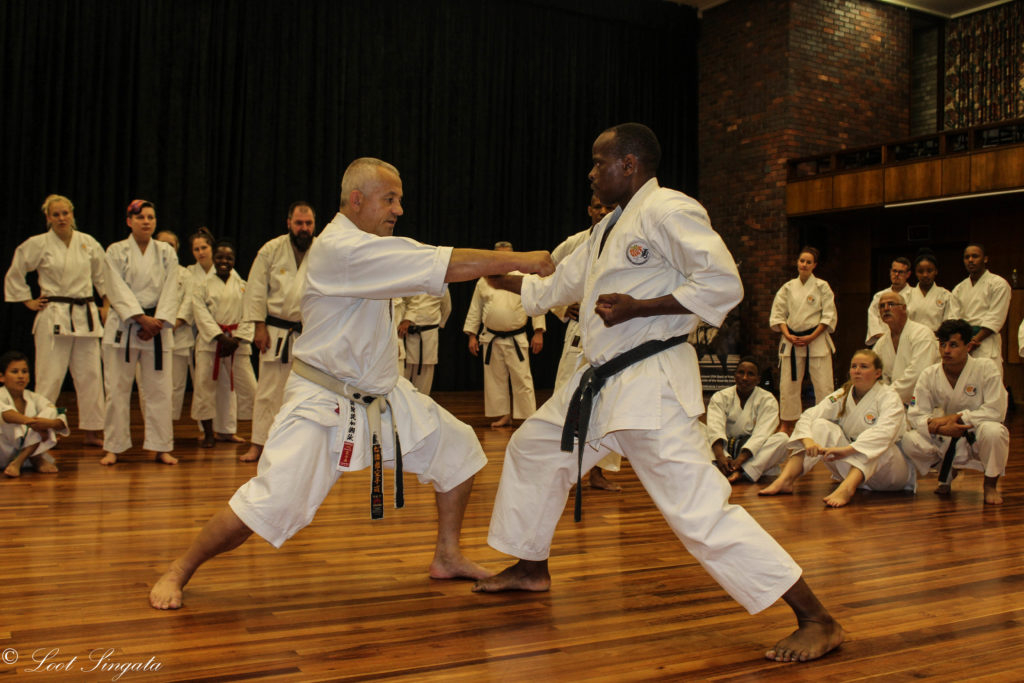 Sensei Pascal Lecourt’s first South African Seminar brought more than 80 karateka to Makhanda (Grahamstown) over the weekend of 27-28 October. Lecourt was invited to South Africa as a guest of the newly formed United Shotokan-Ryu which has dojos in the Eastern Cape, Western Cape and Gauteng. The Seminar was held in the Thomas Pringle Hall, at the 1820 Settlers Monument in conjunction with staging partner, the Grahamstown Foundation.

Lecourt began practicing karate in 1975, and in 1976 he became a student of the legendary Japanese Shotokan karate master, Sensei Taiji Kase (1929-2004). Kase had visited South Africa in 1964 for an extended period, and was thereafter sent by the Japan Karate Association (JKA) to France in order to further oversee the development of JKA Karate in that country as well as throughout Europe.

While there are a number of Kase’s students still teaching throughout Europe, seminar organiser, Gary Grapentin is of the opinion that Lecourt’s transmission of the Kase-Ha School of Shotokan is closest to Kase’s core teachings and principles. Another unique characteristic of Kase-Ha, is that it is practiced strictly as a Japanese Martial Art or form of budo without any sporting aspect attached to it.

During the seminar Lecourt expressed the importance of developing energy through correct breathing techniques, as well as being in harmony with oneself. His quiet demeanour, humble personality and amazing ability earned him the respect of all in attendance. One of the seminar participants remarked that Lecourt’s moments were akin to that of a tiger – graceful, relaxed and powerful with no wasted or superfluous movement.

Lecourt’s passion for teaching the “Kase way of karate” was clearly evident during his interactions with each of the students over the two day Seminar. Although Lecourt is too humble a man to ever accept such an accolade, it is clear that he has become a master in his own right – someone who has achieved harmony within himself and his art.

Grapentin hopes that Lecourt will become a regular visitor to South Africa as he believes his continued input will further develop and improve standards in the way in which Shotokan karate is practiced locally.