Nxele has a new battle to fight 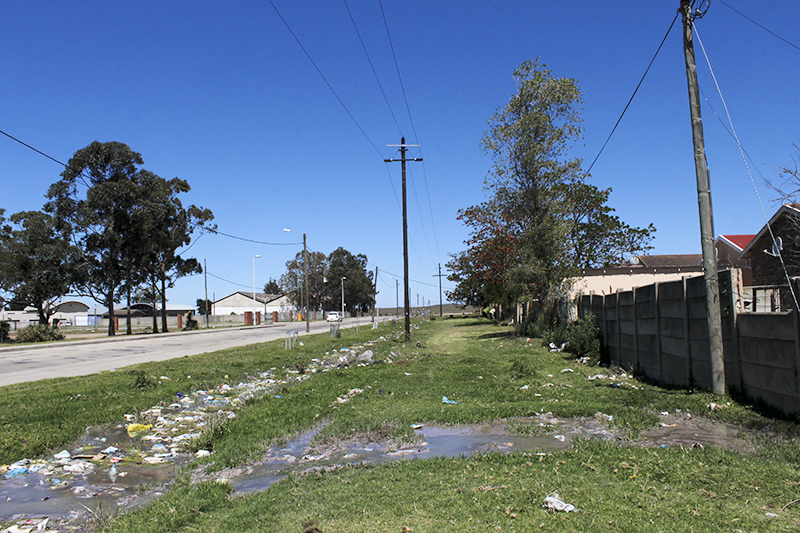 Raw sewage pouring from a junction cover flows into a stormwater drainiage ditch opposite the Extension 6 Indoor Sport Centre on Monday 22 October. Blocked and overflowing drains have left homes and streets in large areas of Extension 5 and Extension 6 flooded with raw sewage for weeks. Photo: Sue Maclennan

Yes, the town’s name change to Makhanda fulfils of the prophecy of ‘Ukubuya kuka Nxele’. But poor Nxele will find very little left of the pristine bush and clear flowing streams (Amatyana) which were once a blessing to all who passed this way.

Nowadays, if you live near any of these streams, you are subjected to the chronic stench of raw sewage. The municipality’s blocked sewerage lines have not been maintained or upgraded for many years, resulting in massive sewage spills (full of E coli) across town, polluting streams and putting vulnerable people at risk. And the local environs are aflutter with plastic, uncleared waste and illegal dumping. Not a very fitting welcome for a great prophet.

I’m not sure what he would think of the Egazini Memorial, erected to honour the fallen Xhosa warriors. What little remains is a bleak commemoration of despair in the face of poverty and near non-existent service delivery in that area.

The battle of 1819 was lost. And 200 years later, Makhanda’s people are still suffering. Now it is a new kind of colonialism – greed, consumerism and corruption. The effect: neglect and pollution.

Nxele has returned. If his spirit truly lives on, he should have strong words for the municipality named after him (even if misspelled). Please win this battle, Nxele, for the sake of Batho Pele and restoring hope.

No Social Justice Without Environmental Justice

Below is an extract from the speech I gave at the Environmental Awards at Rhodes University this year:

A creative spirit of cooperation between students, university, and community, is beginning to blossom…  working together towards sustainability.

Yes, there is a slow but steady shift away from narrow self-interest to an enlightened self-interest. People are “doing well by doing good” – increasingly being involved in actions that further the interests of others. In the broader scheme of things, this serves our self-interests.

People are also beginning to realise more and more that there cannot be social justice without environmental justice.

A Member of Parliament recently said at a political rally that “… it is people in the poorest areas suffering from the worst levels of air pollution. It is children from poorer backgrounds who have the worst diets, low income families most vulnerable to increases in food prices…”

Guess where this was? The UK.

Nearly 200 years ago in Germany, Friedrich Engels noted how the poor were forced “to throw all offal and garbage…  disgusting drainage and excrement into the streets” because they had no other way of disposing of it… so they were “compelled to infect” the area in which they lived.

It’s the same all over the world… no matter what country you live in, the reality is that when the environment is polluted, it impacts the poor first, and worst. People cannot live well when all they have is polluted earth, polluted air, and polluted water. There is NO social justice where there is NO environmental justice.

Section 24 of South Africa’s Constitution focuses on our RIGHTS – it says we all have “the right to have the environment protected for the benefit of present and future generations, through reasonable legislative and other measures”. But the problem is that the RESPONSIBILITY – the power to act – is mostly in the hands of government. Is our government really interested in our environmental rights?

The country of Ecuador is smart enough to realise that human beings are part of their environment, and in its Constitution it gives the people a RESPONSIBILITY to protect and preserve their environment – the POWER to act.

It is time for people in South Africa to take power and act for the environment in which we live. We will only have social justice when there is environmental justice!

What can ordinary people do about the leaking sewage, you may ask? Simple: do not flush disposable nappies, plastic or newspaper down the toilet.

What about the rubbish, you may ask? What can ordinary people do about that? Simple: do not litter or dump illegally, and do take your own bags to the supermarkets and shops.

Ah yes, but there is a bigger problem, you may say. What can ordinary people do about a local government that does not serve its people? The solution is simple: everybody should vote in a better council – vote wisely.

Wouldn’t it be great if the spirit of Nxele could help galvanise this essential change, restore environmental justice and social justice?