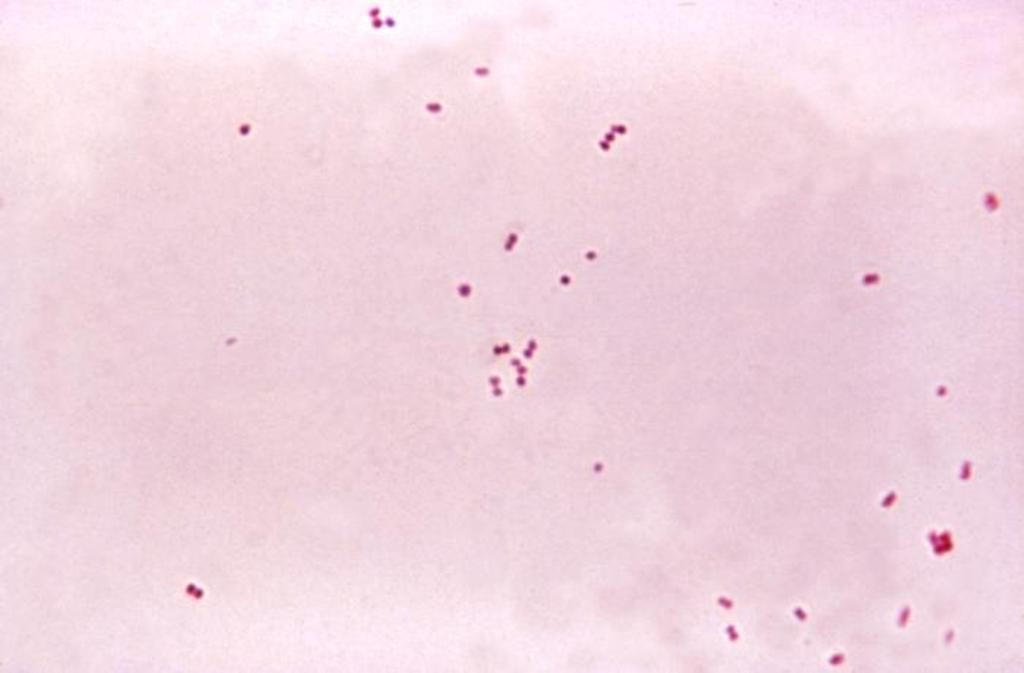 Micrograph depicting the presence of Neisseria meningitidis diplococcal bacteria (Mag. 1150X). Meningococcal disease is an infection caused by a bacterium called N. meningitidis or the meningococcus. The meningococcus lives in the throat of 5-10% of healthy people. Rarely, it can cause serious illness such as meningitis or blood infection. Photo: US Centers for Disease Control and Prevention’s Public Health Image Library (PHIL)

Immunisation is an important action parents can take to prevent children contracting meningitis, says a local GP. Being alert to possible symptoms and seeking treatment early may alleviate a serious infection. Grocott’s Mail spoke to a doctor and the Department of Health after the tragic death of a Makhanda (Grahamstown) Grade 10 pupil last week. The child was being treated in a Port Elizabeth hospital for bacterial meningitis.

It’s essential to access medical care if meningitis is suspected, says local GP Dr Fiona Meihuizen. Meningitis is an infection of the membranes (meninges) surrounding the brain and spinal cord. It can be caused by a bacterial, fungal or viral infection. Bacteria that enter the bloodstream and travel to the brain and spinal cord, or that directly infect the meninges, cause bacterial meningitis.

Parents of pupils at the local school have been advised to watch their children for signs and symptoms of the illness, which include severe headaches, a stiff neck, fever and vomiting. However, the National Institute for Communicable Diseases (NICD) says it’s people living in the same household who are most at risk of contracting meningitis from an infected person.

Where does meningitis come from?

According to the NICD, Studies in the US and Britain show that between 5-10% of the population carries Neisseria meningitidis at any given time. Many people carry the bacteria in their nasopharynx (the area at the top of your throat and behind your nose), says the NICD.

Anyone can get meningitis, says Meihuizen, but infants younger than one year  and adolescents and young adults are most vulnerable.

“Also people with medical conditions which result in them being  immunocompromised are at increased risk. The prevalence of HIV and TB in the South African population in general makes meningitis more of a problem than it may be in other countries,” Meihuizen said.

Meningitis secondary to Neiseria meningitidis is more prevalent where young people are living in close contact with each other- ie those living in boarding school and university residences, Meihuizen said.

According to the NICD, the disease occurs more often in winter and early spring in infants and young people in school, university, police colleges, army barracks, mines or prisons. But while smokers, overcrowded households, new military recruits, first-year university students in residence and young people living in hostels are some of the frequent carriers of Neiseria meningitides, only a minority develop invasive infections, the NICD says. These usually occur in the first 3 to 5 days after acquiring the meningococci.

Person to person transmission of disease is rare, the NICD says, but close contacts have a higher risk. This is why meningococcal disease is a notifiable disease in South Africa:  that means the Local or District Health Department must be immediately notified by phone so they can immediately follow up on close contacts.

Some of the following signs and symptoms may or may not be present: fever; headache; stiff neck; and a reddish spotty or blotch rash which does not fade on pressure (look also on palms or soles of feet) (fromGuidelines for the Management, Prevention and Control of Meningococcal Disease in South Africa 2011 (Department of Health).

How serious is meningitis?

Meningococcal disease can progress to death within hours and it’s for this reason, the NIDC says, it’s vital to have “a high index of suspicion”.

“If meningitis is suspected it is important to access medical care immediately,” Meihuizen said. “Symptoms include fever, vomiting and altered level of consciousness.“

In children older than three and adults, a headache, neck stiffness, photophobia and sometimes a specific rash could occur. In children younger than three years, symptoms could be more non-specific.

“Irritability and failure to feed in young babies can be concerning,” Meihuizen said.

When a case of bacterial meningitis is identified, the hospital/doctors might advise that household contacts of the index case were prescribed a preventative antibiotic, depending on the exact bacteria identified.

Is there an outbreak in this town?

The Department of Health differentiates between a case, a contact, a cluster or an outbreak of meningococcal disease. In his introduction to the NICD document on meningitis, Health Minister Aaron Motsoaledi encourages appropriate responses according to the scale of the disease.

In response to Grocott’s Mail’s enquiry about the status of the disease in Makhanda (Grahamstown),  spokesperson for the  office of the MEC  Lwandile Sicwetsha said on Tuesday, “The district office is looking into this case and will check if there are any other reported cases.”

Meihuizen was unable to comment on the prevalence of bacterial  meningitis in Makhanda currently – “especially as I do not have access to data re diagnoses made in the state hospital”.

How the Department of Health should respond

Every suspected case of meningococcal disease should prompt an urgent response to include:

Source: Guidelines for the Management, Prevention and Control of Meningococcal Disease in South Africa 2011 (Department of Health).

Grocott’s Mail‘s query as to whether these protocols have been followed had not yet been responded to at the time of publishing.

“The most important preventative action that parents can take is to have their children immunised,” Meihuizen said. “Our routine state childhood immunisation schedule now includes vaccines against Haemophilus influenza and Pneumococcal infection – both of which can be responsible for bacterial meningitis.

“In addition, meningococcal vaccines are available and can be accessed in the private sector.”

If you are concerned that you or someone you care about might have symptoms of meningitis, you should consult your GP or clinic.