‘Now we have to suffer for somebody else’s neglect’ 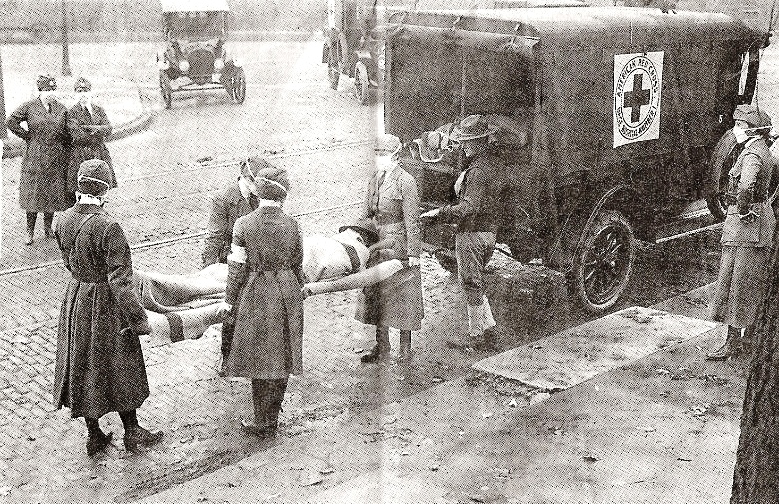 Members of the American Red Cross remove a victim of the Spanish Flu from a house in, St. Louis, Missouri. The 1918 flu epidemic spread across the world, including South Africa. Uncredited photographer for St Louis Post Dispatch

Responses to the Spanish flu epidemic of 1918 reflected racial prejudices of the time, writes Lindinxiwa Mahlasela.

In 2018 South Africa celebrated the centenaries of two icons of the struggle for a society that protects the rights of individuals, promotes racial tolerance, upholds cultural diversity and encourages human solidarity.

One of these, President Mandela, led the country towards these ideals when he presided over the drafting of a Constitution since acclaimed the best in the world.

He was born in the former Bantustan Transkei on 18 July 1918. This was a time of the Great War, 1914-1918. Growing up in a colonial and, later, apartheid society that discriminated against blacks, he led the struggle to remove oppressive regimes. When he ascended to the presidency in 1994 Madiba, as he was affectionately known, took up a campaign to eradicate the scourge of HIV/Aids which was infecting thousands of young South Africans. Currently, according to 2017 Stats SA figures, just over 7 million South Africans have the virus.

Albertina Sisulu (MaSisulu) was also born in the former Transkei, in a small town called Tsomo on 21 October 1918.

October of that year was later called “Black October” because thousands succumbed to Spanish Flu. The influenza (umbathalala/ ifiva) wrought havoc in the villages of the Transkei and, as Phillips would observe later, became “the single most devastating episode in South Africa’s demographic history”. MaSisulu went on to become a nurse.

The epidemic left an estimated 500 000 South Africans dead. This made the country the fifth hardest hit by the pandemic worldwide. Of the dead, 62% were from the Cape Province, one of the four provinces that made up the Union of South Africa.

The death rate was higher in the countryside (approximately 100 000 died in the Transkei alone). This was largely due to the fact that medical practitioners and other health services were scarce and help was slow to arrive. Some districts didn’t even have a district surgeon.

Similarly, black people who lived in cities were seriously affected by the Spanish flu due to poor health services and poor standards of living. As a consequence, this heightened the racial prejudices of the time.

What was the Spanish flu?

The virus started in Etaples, France, where more than 100 000 men lived in close proximity with pigs and poultry. It spread to Kansas, US, in March 1918 where it first struck troops awaiting shipment to Europe.

By June of that year about 43 000 US troops had died from the disease. US army officers deliberately misled their nation and pointed the origin of the flu to Spain. As a result, the epidemic became known as the Spanish flu.

In South Africa, the virus made its first appearance in September of that year. Many of the South African Native Labour Contingent (SANLC) and soldiers were returning from the war. Two ships in particular, the Veronej and Jaroslav, carried individuals who had clearly contracted the disease. Dr Wilmot, in Cape Town, determined that the infected individuals must have contracted the virus in Sierra Leone where the two ships first docked en route to Cape Town.

Because there was little or no knowledge about the virus at that stage, the victims were kept for examination for a few days and later released. From Cape Town, using the relatively extensive rail network, the returnees took trains to their respective destinations around the country.

In Port Elizabeth the virus came via a train from Cookhouse on 4 October 1918. Within a period of three days, 16 cases of the virus were authenticated by the Medical Officer of Health, Dr John Galloway. In his address he stated, “The source of the infection is clear: either they [the infected individuals]are people who have just arrived ill from the infected towns in the Union, or have been in contact with others who have travelled through the infected areas…”

He advised people to suspend travelling and avoid visits and public gatherings.

Influenced by the ideology of racial segregation and superiority that the Union government advocated, Europeans put the blame for the transmission of the virus squarely on black people. Thus Port Elizabeth district surgeon, Dr Kay, advised among other things that the European community should ensure their servants “do not visit New Brighton”, then a 16-year-old township populated by no fewer than 5 000 black people. Perhaps this advice was informed by an article in The Herald on 8 October 1918 which stated that “as was only to have been expected, its [Spanish flu] greatest ravages have been at New Brighton”.

Similarly, Dr Galloway’s counterpart in Uitenhage, Dr Diermont, advised citizens to ensure their servants remained on the premises at night. He went further and advised the council to disinfect the townships in order to ensure that they were “thoroughly cleaned”.

His colleague in the council, Acting Mayor FT Couldridge concurred and further suggested that attempts must be made to “get the government to fumigate the railway carriages [because]they are the one of the worst places of infection”.

The deputy mayor of Grahamstown was more emphatic in regards to avoiding contact between “Natives and Europeans”. He observed that it was easy to ascertain whether “Europeans” were suffering from the disease, but not the “wandering natives”.

“Natives’ movements should therefore be restricted in epidemic times,” he declared.

There were similar comments elsewhere in the Union and they were a clear indication of renewed “sanitation syndrome” fears by white residents that infection was spread by black inhabitants.

Indeed, restrictions were imposed on trains. Concerns from wool brokers added impetus to calls by Uitenhage’s Municipal Council and other authorities, including the Port Elizabeth Municipal Council.

As was to be expected, restrictions applied only to Blacks.

This evoked a sharp disapproval from leaders of the Black community, including the famous Dr Rubusana. He  asked, “Why, whenever there is sickness of any kind, a native has to suffer? We suffered during the rinderpest, bubonic plague, East Coast Fever, etc and now we have to suffer for somebody else’s neglect… when anyone falls into sin or commits an offence is it right to attribute it to the Prince of Darkness because he is the hated one? I think not.”

Another corresponded protested, “If railway travelling was to be restricted it should affect all classes of the population and not natives only.”

Racial bias in mitigating the virus was further evident in the Port Elizabeth City Council’s efforts. Mayor Henry Forbes called upon citizens to volunteer their services and save the city’s citizens from the epidemic. Volunteers, some of whom were qualified health professionals worked in temporary hospitals that catered for European patients. These included the old provincial hospital in Richmond Hill, Lazaretto in Humewood, Feather Market Hall, Village Hall in Red House, New Provincial Hospital in Gabson Street, Seaman’s Institute South End, Russell Road Fire Station and North End Library.

There was a depot in New Brighton that dispensed free medication to the blacks. Similarly, Victoria Primary School temporarily became a hospital when the then Secretary of School Board, AV Steward instructed schools to remain closed.

Patients were given a whole lot of concoctions. These included “Wells Influenza Mixture” that EW Wells & Co Chemist in Makhanda (Grahamstown) offered. Similarly, Needham Chemist in Port Elizabeth had its own influenza mixture. The ever reliable umhlonyane, Chamberlain’s, Epsom salts, quinine, BOSS, German cure, and Iyeza lefiva mixture from Mthatha Chemist were some of the popular medications. Commando brandy was recommended in some quarters. One temporary hospital in Port Elizabeth gave its patients champagne and did not record a single death!

Unfortunately, some volunteers contracted the virus and died from it. They included the wife of Port Elizabeth district surgeon, Dr Kay, who himself was infected. In 1923 the Council honoured them by unveiling a plaque designed by Mr Pickford Marriot.

There’s no physical memorial to remember volunteers in black communities, but a song by R Caluza – “In the year of 1918 we were wiped out by a disease which they call influenza. It took friends whom we loved, mothers, fathers, sisters and brothers”[1].   – served to memorialise the destruction of 1918.

Last, the official figure of Spanish flu casualties in Port Elizabeth stands at 2 017. In Makhanda, Grocott’s Mail reported a “rough estimate” of 1 000 casualties at the height of the epidemic in October 1918. The Mayor of King Williamstown submitted two figures for his district to the Commission of Inquiry that investigated the epidemic in 1919. He first indicated that 2 024 people had died in his district. Later he indicated that more than 7 000 had died. Establishing the number of Black casualties had been difficult because there was minimal effort employed in saving blcaks compared to the interventions made in European communities.

However, during the census of 1921, authorities reported that the population was far less than expected from the previous census. Their explanation for the 500 000 less than the expected growth was that the flu was most probably the cause.

Previous ArticleMakana by the numbers
Next Article Reddits this Friday