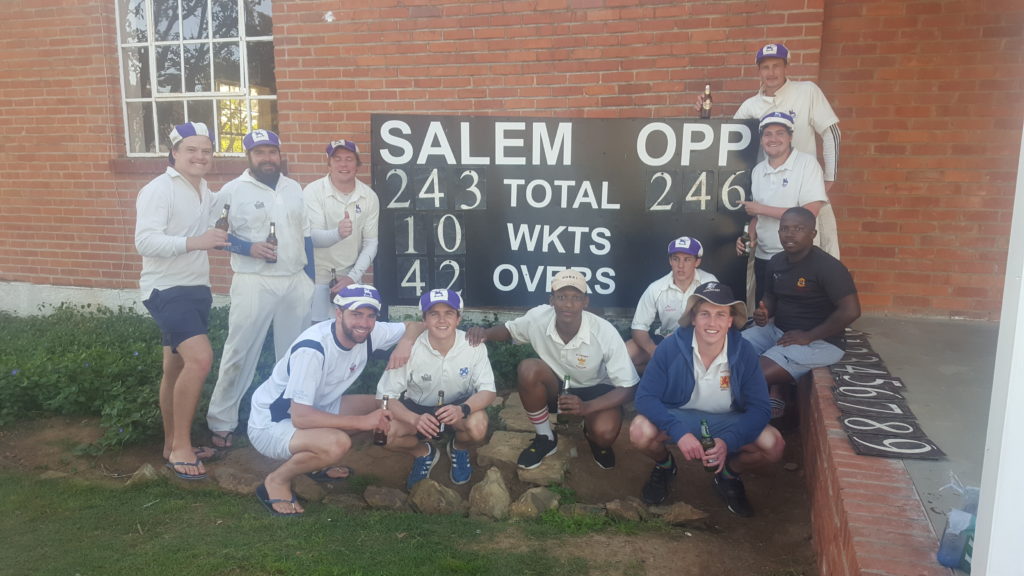 Rhodes Shrews next to the scoreboard after their nailbiting victory over Salem 2nds. Photo: Supplied

Both Rhodes cricket teams bounced back from defeats on Saturday 20 October to record fantastic wins on the Sunday 21 October as they went into their mid-season break on a high note.

The Rhodes Firsts travelled to Southwell on Saturday and, despite a magnificent century from Simon Webster, were unable to chase down the 240 posted by Southwell. The Shrews meanwhile hosted Cuylerville at Prospect Field, where they managed to salvage a total of 141 all out in the first innings. Jason Wehmeyer top scored with 41, while Jack Tilbury and Aiden du Toit chipped in 23 runs apiece. Cuylerville lost a few early wickets but eventually chased down the total with relative ease, sealing a five wicket victory.

With the last day of the GCB season for Rhodes on Sunday, it was all to play for as the First team and Shrews looked to find the perfect way to head into the break.

Rhodes First team hosted Cuylerville First team on Prospect field and, after winning the toss, elected to bat first. Ryan Harley (22) and Matthew Menear (38) laid a good foundation in the early overs before David Blenkinsop smashed a quick 80 to set a very competitive 248/8. A fantastic bowling performance then ensued as Cuylerville were skittled out for just 67 giving Rhodes a terrific 181 run bonus point victory to make a huge statement of intent across the first league.

Meanwhile at Salem, the Shrews posted a first innings score of 241 thanks to a great knock from William Samson (68) and handy contributions from Martinus Scheepers (45) and Stephen Pettitt (33). Salem got off to a slow start but eventually built some momentum until they looked on track for victory at 223/7 needing just 26 runs in 13 overs with three wickets in hand.

However, some terrific bowling from Wehmeyer and du Toit meant that the Shrews had Salem 243/9 and with just three runs remaining, Wehmeyer sent the bails flying as the Shrews picked up the tenth wicket to win by just three runs in stunning fashion.

It was the perfect way to end the season for Rhodes cricket who have bounced back very well after a disappointing previous season and look on track to become a very competitive side in both leagues going forward.

Previous ArticleCenturies for Stirk, Loutz and Webster
Next Article Beads and my patch of earth