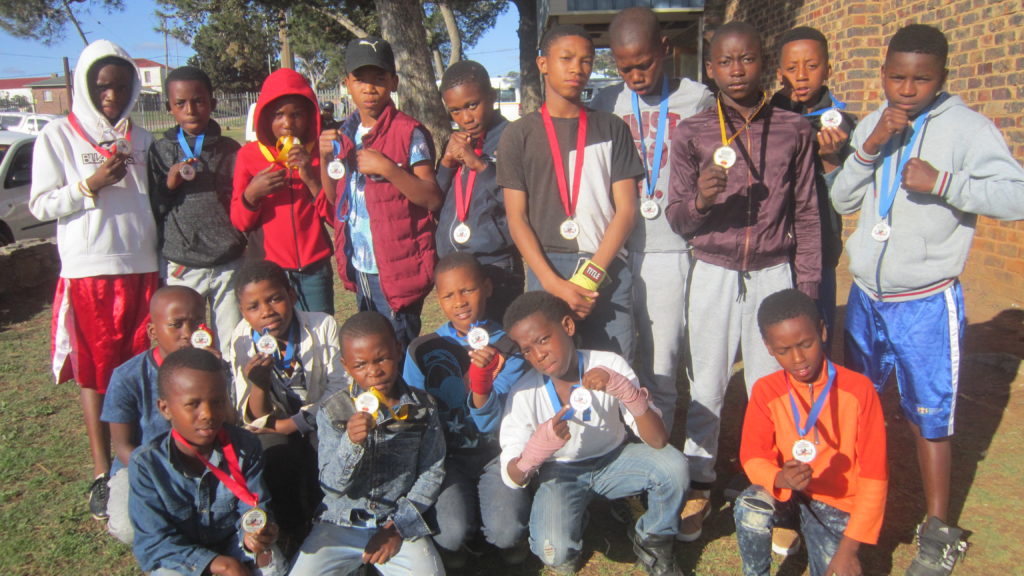 The Boxers at the Mfuzo Boxing Camp year end event received there medals on the day. Photo: Lindani Donyeli.

On Saturday 13  October, Mfuzo Boxing Club celebrated their 23rd anniversary, as well as the end of the year, by hosting a Boxing Tournament event in B.B Zondani Hall.

The event consisted of local clubs and non local clubs from different areas from Buffalo City, Kenton On Sea, Peddie, Adelaide, Thubalethu from Uitenhage, Buffalo, and Seamore. Boxers from all different age categories came together to compete on the day, with competitors participating in bouts for fighters aged 12 to 14 youth,15 to 16, 17 to 18,  and the Elite 19-40 years.

The tournament started at 1pm, with the juniors being the first to take to the squared circle. The first fair ten bouts were awarded medals by Wandisile Che, a member from Makana Makana Brick.

The crowd was split with a large number of good quality boxing matches, and could not contain their excitement. Cheers of “Jep Jep. Betha, Betha. Yha, Yha. Sondela, Sondela. uve kwenye ikona esithi”Iyabethwa ibodi, Uppercut, Isu-su,”  were heard from all corners of the building.

Mfuzo Dyira thanked all the clubs who made it to the tournament. He also thanked the sponsors who made the event possible, starting from Makana Brick who was the major sponsor with 40 gold medals and 40 silver medals, as well as six trophies. The trophies were split between three different categories and awarded to the deserving clubs. The Department of Sport, Recreation, Arts and Culture (DSRAC) had also sponsored 40 medals. Beer Properties had also provided assistance with the promotion of the tournament, as well as provided the officials with refreshments on the day.