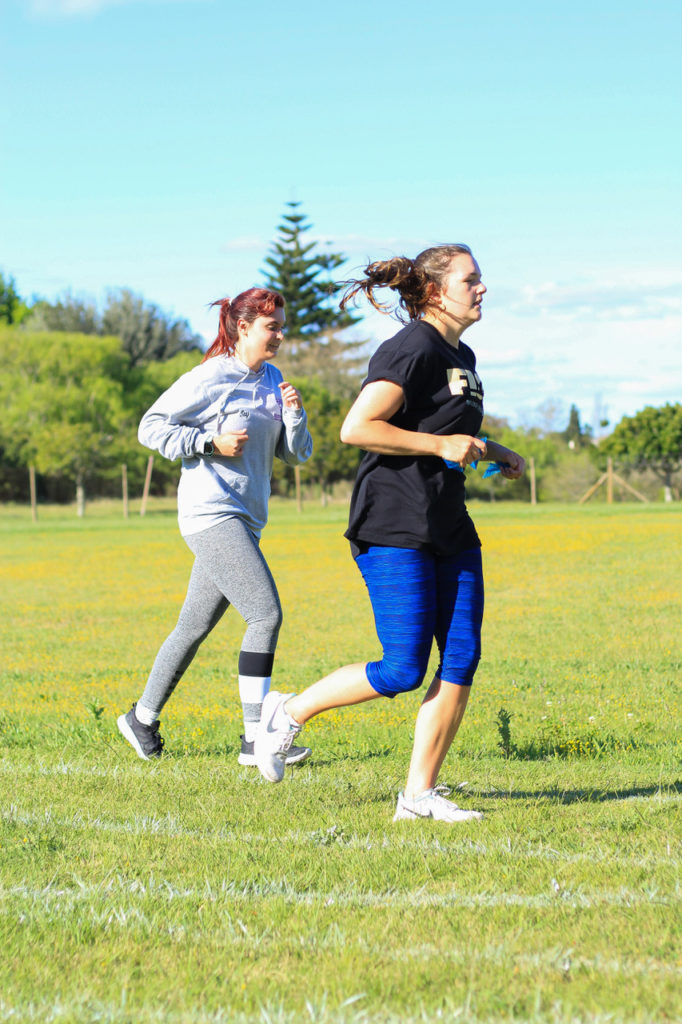 Tayla Mackintosh (left) and Teri Gwilliam took on the challenge of the Glow Run on Saturday 13 October as part of the Rhodes Hellenic Society's collaboration with the Rhodes Athletics society. Photo: Mzwanaele Sibanda

The Rhodes University Hellenic Society, otherwise known as Greek Soc, hosted their first Glow Run on Saturday 13 October, in collaboration with the Rhodes Athletics Society. The event contained a 3.5km run around the Rhodes University Astro Turf, with a goal of raising donations of various goods for those in need.

Chanelle Descroizilles, the President of the Rhodes Hellenic Society and Vice President of The National Association of the Hellenic Youth Students of South Africa, expressed that the the purpose of the Glow Run was to receive any donations from the public and to create an inclusive event for the Makhanda (Grahamstown) community.

“There is no entrance fee. We asked people who were able to donate toiletries, pads, tampons, dog food, anything that they wanted to donate and we would get it to the right people,” said Descroizilles. “So that it did not exclude anyone that wanted to do [the run].”

The donations received are to be distributed to those in need and other organisations such as the Give 5 campaign, SPCA and Rhodes societies that can aid in the distribution of the various donations that were received from the Makhanda (Grahamstown) community.

Descroizilles wanted to work alongside one of the sports clubs to allow students to get some fresh air and excursus ahead of exams, while still providing to a good cause.

The Rhodes Hellenic Society has been focused on collecting the same types of donations throughout the year, with their annual Greek Ball also taking donations of tampons and pads for those in need, with a view to distribute them in the near future.