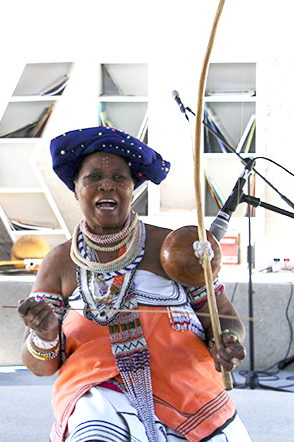 Bow player Madosini Manqina performs at the Puku Story Festival in 2017. Traditional Nguni societies used the calabash as a vessel and as an anstrument. Photo: Sue Maclennan

Traditional communities would gather around and drink amasi (sour milk) from the iselwa (calabash). After finishing the amasi, women play a musical instrument called uhadi (Xhosa musical bow string) made from a calabash.

The plant is a close relative of pumpkins and squashes belonging to cucurbitaceae family. It is a creeping annual herb with the stems supported by tendrils. The large, rounded leaves are somewhat toothed along the margins and are hairy below. Flowers resemble those of the pumpkins but they’re not yellow, and open at night. The fruit is green at first, but becomes pale brown when it ripens and dries out, leaving a thick, hard, hollow shell with practically nothing inside except the seeds (the fruit fleshy dries out completely).

One of the early choices of wood in making the stave or injikwe in isiXhosa, was a tree called the ‘umbangandlela’ (Heteromorpha arborescens). It was later made by bush call ‘uliza’ which in abundance on the mountain sides of the Eastern Cape. The length of the stave is made by measuring the wood in relation to the arm of the particular. The wood is then forced into curved shape by forced the ends into an inward direction and secured in this position by means of stringing.

Before the 20th century, the string or ‘usinga’ in isiXhosa was originally made from a length of animal gut or hair. Artists of the 20th century made bowstrings from the twisted wires of the bangles that the women wore in their ankles. The bangle was heated on the fire and stretched out to be used for the bow. By the 21st century, Xhosa people started making strings out of brass wire.

The resonator is made from calabash which is a growing calabash that is harvested when green and allowed to dry out. A hole is made on one surface where the stalk would be attached approximately 7-9mm wide. The seeds are removed, and the inner walls of the gourd are scraped with a stick to remove all residue. The gourd is left to dry for at least two days. After the gourd has dried out, two small holes are made in the centre, in the area directly opposite the opening. To make the insulating pad, a piece of soft cloth is folded into a square. Another narrow strip of cloth is twisted into a thin rope or ‘string’, and this is passed through the two small holes in the gourd, so that the two ends hang loose, and are available for securing the gourd and the insulating pad to the bow stave.

The beater is called ‘umqungu’ in isiXhosa, and is made from the tambokkie grass, or umfuqa.

Lagenaria is one of the most ancient of all crop plants and is considered to be indigenous to Africa. There are many questions around the origin of the bottle gourd.

Did it really originate in Africa, as is usually supposed? Was it domesticated as a food plant or as source of gourds?

Archaeological remains in Africa date back a mere 2 000 years, while Central and South American sites have seeds dating back about 9 000 years. No one can say with certainty if the seemingly spontaneous populations on Africa are truly wild. It is possible that early wild forms were dispersed along the sea currents to tropical America, Asia and Papua New Guinea. The fruits are known to float in the sea for many months without the seeds losing their viability.

Green leaves are commonly eaten as a vegetable and are added to maize porridge, or a relish is prepared with them, mixed with other plants.