Khoza warns of another Hitler, Amin 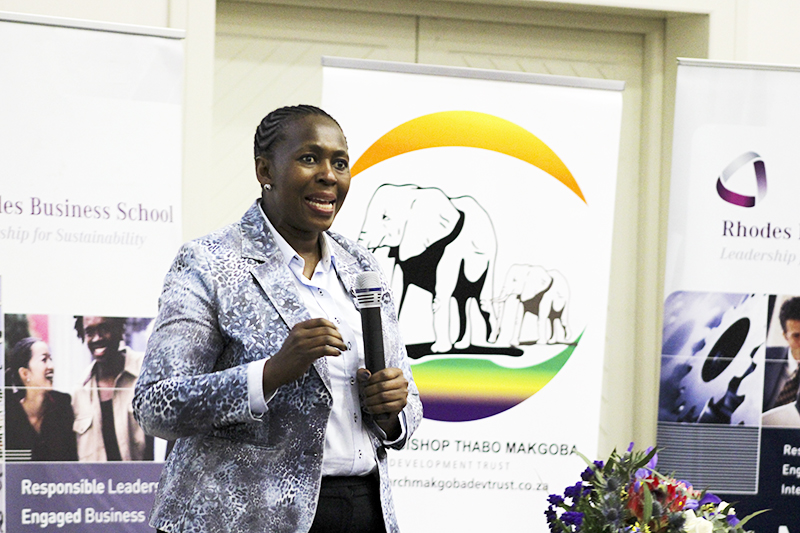 In order to self correct, the ANC would have to get rid of 85% of its current leadership. “We are governed by the psychologically defeated,” Makhosi Khoza told the audience at the Archbishop Thabo Mokgoba Development Trust Annual Lecture at Rhodes University on Monday 1 October.

Khoza’s no-holds-barred take on getting education right, sorting out local government, working with not against civil society and holding the Constitution as a moral reference point were themes that confirmed Khoza’s reputation for facing off with sacred cows. The annual event with the theme of values based leadership is hosted by the Business School and has featured extraordinary women in three of its four editions.

Khoza was appointed Executive Director and Head of OUTA’s (Organisation Undoing Tax Abuse) Local Government Programme in May this year, nine months after her axing as chairperson of Parliament’s portfolio committee on public administration.

“The money has gone and that’s why the municipalities have collapsed. The corruption bubble has burst – but we are still eating,” Khoza said to the audience in Rhodes University’s Eden Grove Lecture Theatre.

Referring to Makana’s routine use of its equitable share (the portion of national tax municipalities get quarterly for subsidising services to poorer residents) to pay off its Eskom debt, Khoza said, “There’s no dignity in that.

“The  money’s gone – that’s why the municipalities have collapsed. I don’t know why we are destroying our people.

“The time looks short between now and May,” Khoza said. “But the looting that will happen in that time!”

The other factor destroying local economies, Khoza said, was that entrepreneurs were being sidelined.

“Local businesses are the only way government has to provide sustainable and affordable resources,” Khoza said. “We need small businesses to create local jobs. Some of them are holding up the local economy.”

She was horrified at the fact that under a Constitution designed to undo the harm that separate development had wreaked, communities were once again separating themselves.

“There is no freedom of movement in some parts of Joburg,” she said. “Areas are closed off with boom gates. This is because we are governed by a defeated people who are living on the deprivations of yesterday.”

Khoza said that among those in charge of South Africa, a culture of instant gratification was greater than concern for consequences on future generations.

“The rate of unemployment among our youth is a recipe for the rise of an Idi Amin, an Adolf Hitler,” Khoza said. “The conditions are ripe.”

She also warned against sidelining the interests of the poor.

Cosatu President Zingiswa Losi, who was in the audience, spoke about some of the policies being introduced by President Cyril Ramophosa. Losi is a member of the ANC’s National Executive Committee.

“Whatever policies he makes, the President needs civil society behind him,” Khoza replied. The culture of the mass democratic movement, where civil society was seen as integral to democracy, rather than as the enemy, needed to be rekindled.

But what should not be rekindled are old programmes.

“The problem with liberation movements is that they are established for a particular mission,” Khoza said. “The only way for them to survive is to keep the programme of yesterday alive.”

People were no longer elected because of leadership qualities, but for the control they had over branches.

“A unity vote is not about principle,” she said.

“If the ANC wants to self correct it must get rid of 85% of its leadership. This recycling of failure is very insulting to me as a Black African.”

Khoza said she had no problem with land redistribution.

“I have a problem with priorities. We have Grade 4s who can’t read or write.”

Khoza warned that failure to follow proper processes in the redistribution of land would resurrect a colonial mentality and allow white supremacy to flourish.

“Don’t create an antagonistic environment,” she pleaded. “It will tear this country apart.”