SASSA strikers back to work on Monday 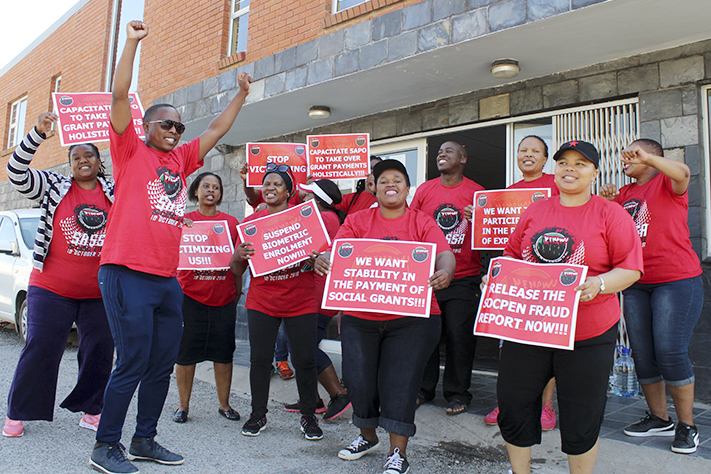 Striking SASSA staff affiliated to the National Health and Allied Workers Union will return to work on Monday. This comes after agreement was reached between the union and Minister of Social Development  Susan Shabangu on 10 October, hours after staff at SASSA office across the country commenced what they said would be a total shutdown.

Nehawu announced the strike on Monday, saying it was as a result of SASSA management’s refusal to resolve the challenges brought about by the migration of the Social Grant Payment System from Cash Paymaster Services [CPS] to the South African Post Office [SAPO].

In the statement posted on their website, NEHAWU said the full blown strike would begin on 10 October 2018. “On Wednesday the total shutdown will begin which shall halt all SASSA operations until our demands are fully met,” the union said.

Nehawu said staff were trained to perform biometric enrolment for beneficiaries instead of biometric identity access and management.

Responding earlier this week to the strike threat, acting SASSA CEO Abraham Mahlangu said affected staff members had been provided with training to enable them to perform biometric enrolment.

The Post Office said the strike by SASSA employees at branches across the country would not affect the payment of October social grants and that recipients should go to the payment sites in their areas on the scheduled dates.

The Post Office said it had already completed paying 86% of the 6.7 million social grants recipients that were on its October payment file.

“The agency views the strike as illegal therefore unprotected as in terms of section 64(d) of the Labour Relations Act, it does not meet the (7) day period as stipulated in the provision,” Qina said. “The agency in the region issued a circular informing all staff in the region about the status of the strike action as explained above.”

Nehawu shop steward at the Makhanda (Grahamstown) branch of SASSA Elton Dawuti said their was a peaceful strike, clients inside were being assisted and the strikers were not preventing the public from entering the building.

“Staff who belong to other unions are working,” Dawuti said. He said those striking wanted their voices heard.

“SASSA staff must be capacitated to take over payments in a holistic way,” Dawuti said.