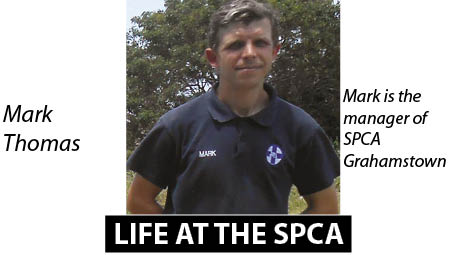 THE Grahamstown SPCA has called on members of the public to stop chaining up their dogs.

SPCA General Manager Mark Thomas said they are becoming very concerned with the increase in occurrences and complaints they are receiving and investigating of animals being chained.

“The regulations of the National Society for the Prevention of Cruelty to Animals (NSPCA) indicate that animals should be free from discomfort, pain, fear, hunger, thirst and injury, and free to express normal behaviour – the latter by providing sufficient space, proper facilities and company of the animal’s own kind,” Thomas said.

The Animal Protection Act No 71 of 1962, indicates that it is a contravention of the law if someone “confines, chains, tethers or secures any animal unnecessarily or under such conditions or in such a manner or position to cause that animal unnecessary suffering or in any place which affords inadequate space, ventilation, light, protection or shelter from heat, cold or weather…”

SPCA Inspector Monwabisi Dingana said, “People should ensure their properties are suitable for dogs, including that there are no holes in fences and that gates are kept closed, and that there is suitable access to food, shelter and water.”

“Offenders found to be contravening the stipulations for keeping an animal could be subjected to a visit by the SPCA, with failure to conform possibly resulting in the animal being removed,” Thomas said.

Anyone wanting to report an owner whose dogs are being tied up or chained can contact the SPCA at 046 622 3233.