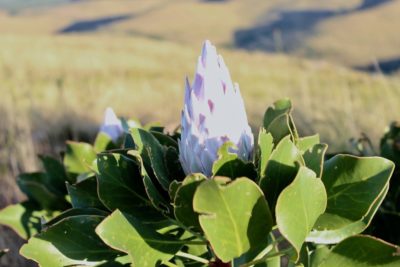 In August this year Grocott’s Mail reported on community uproar over the illegal harvesting of some of Grahamstown’s (Makhanda’s) wildflowers. We spoke to Makana Municipality’s Environmental Manager, Ndumiso Nongwe, who said he would make the issue of illegal harvesting a priority. This week we report good news: Makana has applied to the Department of Environment, Development and Economic Affairs (DEDEA) for permits to the Peppergrove flower sellers.

“Harvesting should be confined to the southern slopes of Mountain Drive and Highlands areas and behind the Department of Parks and Recreation,” Nongwe wrote.

A source from the Department confirmed to Grocott’s Mail on 26 September that the sellers had been issued permits.

“The quantities have been explained to them and are very low at present [they]will probably be increased quite soon as they are a little unrealistic,” the source said. “The onus is on the municipality to monitor the harvesting.”

The harvesting is subject to conditions that permit the harvesting of the flowers only on Thursdays and allow for only 10 of each species to be picked on the day by each person.

“About monitoring responsible harvesting, when this group comes back from harvesting I will meet with them so that I can see and count what they harvested,” said Nongwe.