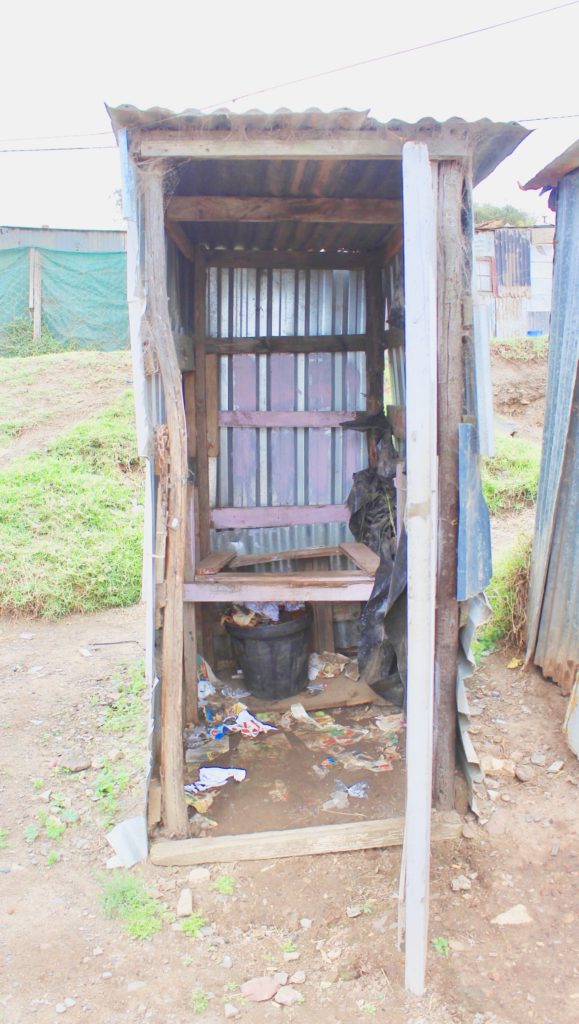 Sun City is an informal settlement below Hooggenoeg in Grahamstown (Makhanda). It is speculated that between 300 and 500 people call the settlement home. The city was built on top of a landfill, and has no formal sewer services. Community members use bucket toilets, and have two water taps.

Young children run barefoot through the muddy pathways between shacks, dogs and other animals dig through piles of rubbish for something to eat, and laundry lines are carefully hung over rivers of raw sewage.

The smell is pungent; a mixture of spoiled food and human faeces.

“Our issue is our taps and our buckets”, said Sun City resident Patrick Roman. “Our buckets [are]full”.

Roman stated it had been three to four months since the buckets were collected, and residents had resulted in dumping their buckets into the bush at night.

Ward 4 Councillor Brian Fargher visits Sun City often. “My ward borders on this area and I’ve become progressively concerned about it”, he said.

Fargher stated that the settlement had potentially been around for almost 50 years.

In 2009 according to municipal reports the area was commissioned to become a landfill, but residents say they have been living there for more than 30 years.

“The area was closed, people were removed to areas of Mayfield and Hooggenoeg. But some people moved back, sold their houses and started Sun City informal settlement.”, said Makgoka.

“We cannot say they have been living there for 30 years”, he said. “They were removed, [and]given houses in [other]areas.”

It is alleged that Sun City residents rent out their RDP houses in Mayfield and Hooggenoeg as a way of generating income, and choose to live in the informal settlement.

“The municipality has put temporary sanitation like your bucket system there, and we put two if not three communal taps to provide for basic services which is your water and sanitation.”

Makgoka stated that Sun City was a key issue brought to his attention when he took office two months ago. He visited the area on 17 August. Residents told him that their waste was not collected regularly, and one of the two taps was broken. Our Grocott’s Mail reporter witnessed the same issues on19 September.

“I investigated the matter related to the toilets further, we are collecting on a fortnightly basis”, said Makgoka. However, after further questioning Makgoka stated that this was not happening.

“The last time we went to Sun City to collect [waste]was 18 August”, he said. “In theory we are supposed to be going fortnightly but because the municipality is experiencing financial challenges and the truck [is not working], [collection]isn’t happening on a regular basis.”

“It appears that no sewage buckets have been collected in the last three months”, said Fargher following a visit this past week.

Fargher added that he previously queried this with the municipality and received a confirmation that due to issues with the sanitation truck no sewage had been collected for almost three months.

“With sewage buckets right next to their dwellings we have very serious health risk problems”, said Fargher. “In terms of diseases we are dealing with a shopping list!”

Makgoka confirmed residents woes that out of two communal taps, only one was functional. The broken tap was leaking and required another fitting on the tap’s head in order to dispense water.

Grocott’s Mail spoke to the resident who took this matter into his own hands after waiting weeks for municipal services.

Freddie Smith, or ‘Bossy’ as community members call him, lives next to the broken tap in Sun City. After seeing how much water was being wasted, Smith made a new fitting out of pipes and plastic.

“The issue here is that people are really poor. They have no income, and are struggling with sanitation and water.”

“There are two little taps here, and this area has been here for more than 30 years.”, he said.

Makgoka stated that the broken tap had been vandalised.

“It’s a challenge when it comes to services [there]”, he said.

Fargher added; “With 500 people using one tap we can’t say that that is anywhere near adequate. A community of 500 people should probably have 10 or 15 taps operating, so we have a problem there straightaway.”

Makgoka has a background in epidemiology and microbiology and previously studied the health hazards of informal settlements.

“The issue of informal settlement generally is that it’s unhygienic”, said Makgoka. “Because there is no proper water and sanitation.”

He emphasised that municipal and government programmes were needed to combat issues of health and hygiene. “Education should be part of the programmes”, he furthered.

“Future plans is formally to remove them from that place”, said Makgoka. “It’s a landfill site for heaven’s sake!”

Methane gas is a natural by-product of decomposing waste in a landfill, and is present at Sun City. The gas is highly flammable and can cause headaches, nausea and vomiting if inhaled in large quantities.

One Sun City woman told Grocott’s Mail that she was experiencing stomach issues and headaches on a regular basis.

“We need to educate our people”, urged Makgoka. “We understand there is the issue of land and housing but if you can reside on top of a volcano you are calling for trouble.”

The area poses an extreme health hazard to residents, inclusive of water and food-borne illnesses such as cholera and hepatitis-A.

Though the tap water is safe for residents to consume, the standing water throughout the area is a different story. These puddles and pools have attracted year-round mosquitos, and serve as a breeding ground for dangerous microorganisms like ecoli.

“We saw quite a disturbing scene at one point”, said Fargher. “Where [residents]are throwing used nappies on top of the roofs of the houses and the worms formed in those nappies are falling through the roofs.”

“This is a community that is fed-up, so we have social unrest that’s just bubbling under the surface”, stated Fargher.