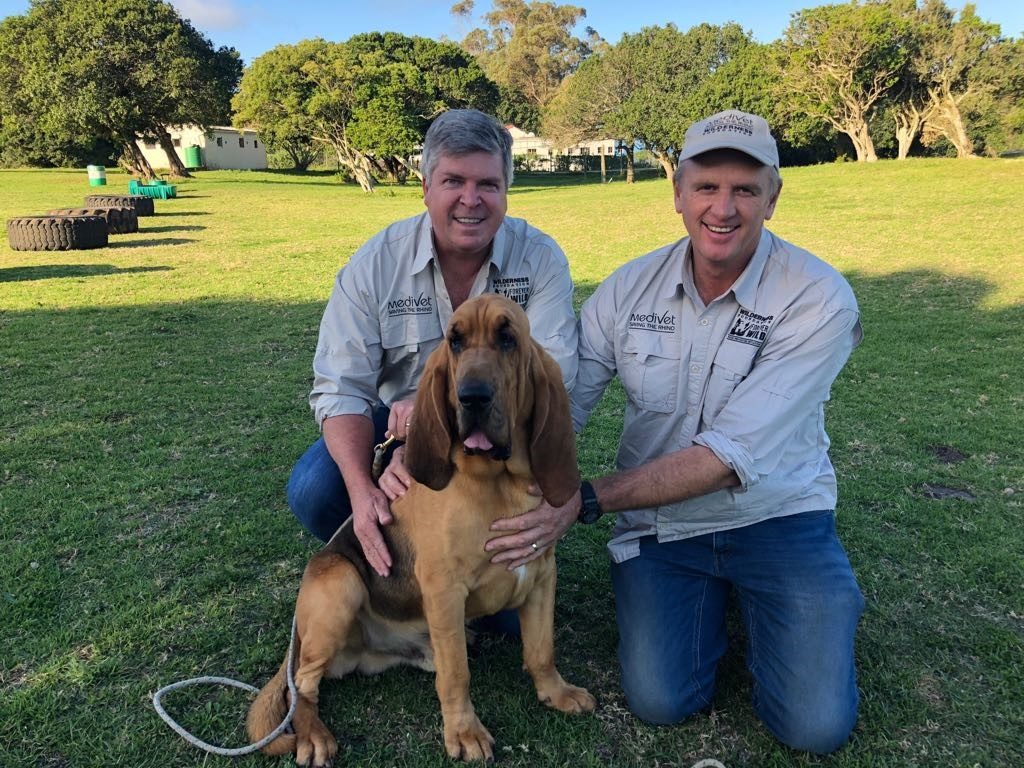 On World Rhino Day this year, the Eastern Cape’s rhinos enjoy enhanced protection from the poaching crisis, with the deployment of Ziggy, a cold scent tracking dog with a unique proficiency for tracking poachers.

Ziggy’s deployment is an expansion of a local cold scent tracking dog programme made possible through an international partnership between the Wilderness Foundation Africa (WFA) and the Chipembere Rhino Foundation (CRF), as part of the Forever Wild Rhino Protection Initiative. The project is solely supported by Medivet and the Medivet Save the Rhino campaign.

Ella has successfully tracked and contributed to collecting evidence in the Eastern Cape at most rhino poaching incidents and thwarted potential criminal activity in areas of operation. Her dedication and skill set are revered by reserve owners and managers, as well as crime scene detectives and feared by poachers. This has spurred the deployment of Ziggy to build on this success.

A full Bloodhound owned by WFA and funded by Medivet, Ziggy recently joined the existing and respected K9 unit at the Addo Elephant National Park, which includes Bullet, Banshee and Loco, all specially-trained and skilled tracking and apprehension dogs. Ziggy brings his highly-effective cold scent tracking skills to Addo and neighbouring state-owned parks and private reserves in the province.

Bloodhounds like Ziggy and Ella can track scents that are significantly older, even days later, and over great distances, due to their superior sense of smell and strong, tenacious tracking instinct. The ability to track down perpetrators that have made their way into areas with the intention of committing a crime ensures the poachers’ trail is found before they have had the chance to poach wildlife. Their unique ability allows them to track poachers long after a poaching incident, making these ‘cold scent’ tracker dogs a vital tool in poaching incidents.

“Trained tracking, apprehension and cold-scent tracking dogs used throughout Africa have shown to be a successful poaching deterrent, contributing significantly in curbing poaching through early detection and/or apprehension,” says John Adendorff , Conservation Manager of Addo Elephant National Park. “However, these dogs require specialised skills, months of training as well as training for their handlers, followed by regular testing and ongoing refresher training. It is a costly investment and we are deeply grateful to WFA, Medivet and CRF for providing our precious rhino with this highly-effective protection against poaching. We are delighted to welcome Ziggy to our already formidable anti poaching K9 unit.”

WFA launched its Forever Wild Conservation Programme in 2011, in response to the increase in wildlife crime, now the fourth most profitable illicit trade in the world and worth an estimated $20 billion annually.

The programme has been active through the Rhino Protection Initiative, which primarily focuses on supporting anti-poaching and K9 units on-the-ground; increasing security and law enforcement actions; growing public awareness and helping to reduce the demand for rhino horn in user countries. In 2013, the Programme was expanded to include lion, leopard, elephant and shark conservation initiatives.

“Investing in K9 units is making a huge impact in safeguarding Eastern Cape wildlife,” says Brent Cook, Founder of CRF, a local registered non-profit and public benefit organisation in support of rhino protection. “We believe that our training and success in this regard has ignited international collaborations such as the Wilderness Foundation Africa Medivet Saving the Rhino (UK) initiative, providing this vital tool in combating rhino poaching and supporting all role players from rhino custodians to law enforcement and crime scene investigators.”

This project is fully funded by Medivet, a UK-based veterinary group with over 110 practices throughout the UK, and the Medivet Saving the Rhino (UK) campaign. As part of their commitment, they partnered with the WFA to develop, implement and support the Forever Wild Rhino Protection initiative in South Africa.

“Without project partners like Chipembere Rhino Foundation and key funding partners like Medivet, a project like this would not be possible. To prevent wildlife crime, it’s imperative that we focus on working together,” comments Angus Tanner, Senior Manager Conservation at WFA. “We want to saturate the Eastern Cape with well-trained anti-poaching cold scent dogs to protect our precious heritage. By repeating the successful formula we have seen with Ella, we intend to equip more handlers and deploy more cold scent tracking dogs throughout the Eastern Cape.

“We believe that the expansion of this programme will help unite the wildlife front and have a positive impact on curbing rhino poaching. On this World Rhino Day on 22 September, we celebrate the collective passion for wildlife that our partners have shown and the progress we are making in protecting our rhino for generations to come.”