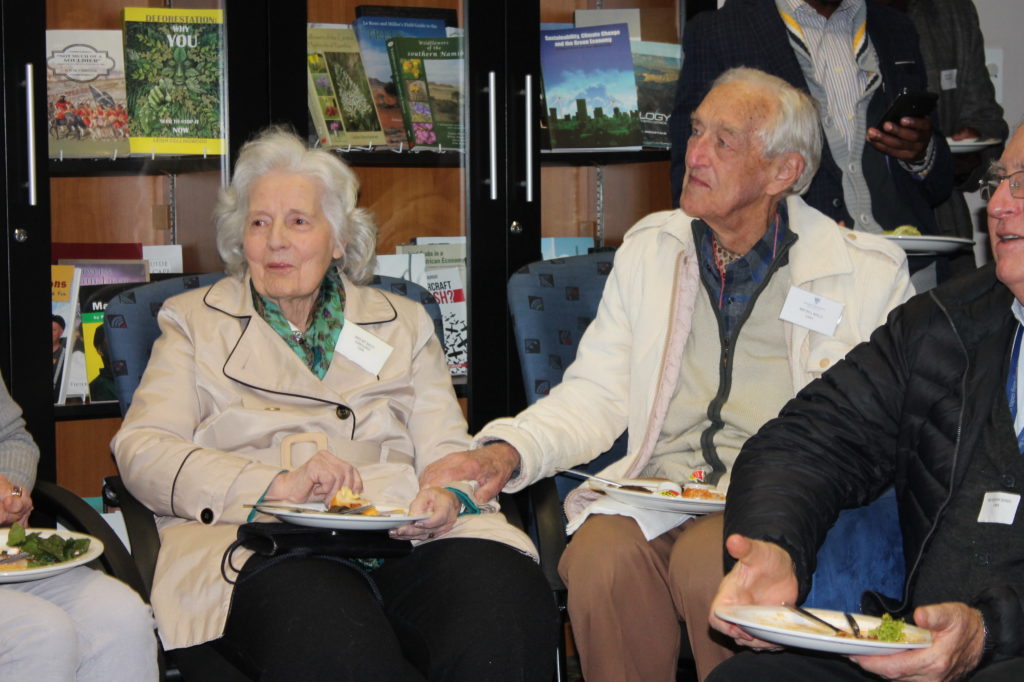 In 1947, Bill Mills travelled from a town called Umtali in the Southern Rhodesian highlands, to South Africa to study for a B.Com degree at Rhodes University. Unbeknown to him, in his third year he would lose a partner and gain the love of his life – all in a single moment. Old Rhodians Kit and Bill Mills celebrated 66 years of marriage on 20 September 2018 and theirs is a story of enduring love.

Before Bill went to Rhodes University, he planned to get a B.Com degree, travel back home to do his articles, and then become a Chartered Accountant.

Kit arrived two years later in 1949 for a BA Fine Arts, which ultimately became a BA with a major in isiXhosa – the University’s first isiXhosa graduate – and stayed at JK House while she struggled with early morning Fine Art classes. It wasn’t long before Kit and several of her house sisters formed a social group known as the Koffie Party (KP).

Bill started going steady with a member of the KP – a friend of Kit’s named Jill. Four months into their relationship, Jill met another gentleman she wanted to “go steady” with. During one of the KP meetings, Kit offered to run interference for Jill when she broke up with Bill.

With this plan in mind, Jill let Bill down at the St Mary’s Hall Ball, and Kit quickly swooped in to sweep up the pieces by taking him over as her steady push. Not permanently, of course – or so Kit thought. However, Kit found herself growing increasingly fond of Bill, and Bill quickly realised he was no longer thinking about Jill.

Once he had obtained his B.Com degree, Bill travelled back home to Umtali, just as he had planned. When his mother asked him why he was not leaping for joy over getting his degree, Bill merely said, “I can’t get that girl out of my mind.”

1950 culminated in a beautiful relationship between Bill and Kit. By 1951, Bill was working as an economist in the Rhodesian Civil Service; and Kit, having obtained her BA, followed him to Rhodesia to work in the Civil Service herself.

Bill at 23 and Kit, now 22, were married on 20 September 1952, in Queenstown. Five children arrived between 1959 and 1969. One boy and three girls came in quick succession, and the fifth child arrived a full five years after the fourth. “Just to show that we still knew how,” as Kit put it.

When asked what their secret is to such long-lasting love, Bill said, “You have to have a sense of humour. You need to keep looking for things to talk about and laugh about. Remember your wedding vows, be absolutely honest with your partner and trust one another. Marriage is a partnership of equals.”

Throughout their marriage, Bill and Kit have found things to laugh about and cry about together, making all their days together memorable. The beginning of their story led to a fulfilling journey worth talking about and they show no signs of slowing down. They are both still very involved in the community of Grahamstown, having retired from Rhodes’ staff in 1990.

Sixty-six years of marriage is a long time. In the case of Kit and Bill, it means five wonderful children, approximately 22 500 nappy changes, three grandchildren, several career changes (including 14 years helping Vice-Chancellor Derek Henderson to put to rights a rather run-down University), lots of losses and gains, lots of love, and journeys around the world – usually in a RV!