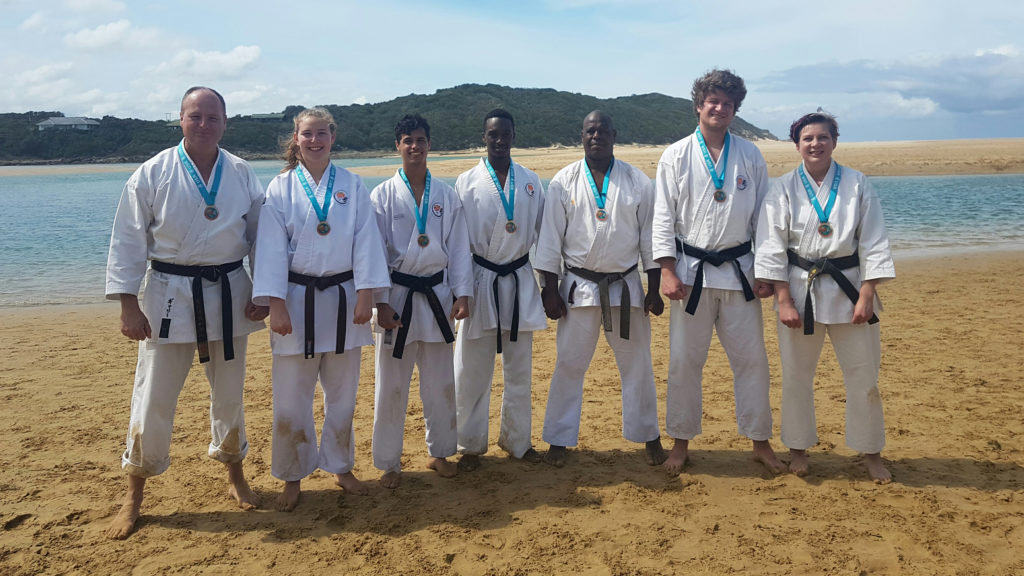 According to Grapentin, the candidates underwent a gruelling examination which comprised the demonstration of kihon (basic techniques), kata (forms), bunkai (application), kumite (fighting) and fitness. Unlike competition point fighting during which karateka are awarded points for delivering controlled and decisive techniques, fighting at dan gradings is continuous and permits the use of full contact kicks, punches and strikes to the body.

A fitting end to the grading weekend was the coastal gashuku (outdoor training) which was held on Kariega Beach in Kenton on Sea on Sunday in perfect weather conditions. The three hour training session was attended by seventy-five karateka of all ages and belt levels.

United Shotokan Ryu was established earlier this year, with the primary purpose of providing greater opportunity to its members. The Union’s working committee is well-represented by local karateka including Grapentin (chairperson), Mzwandile Matebese (vice chairperson), Maureen De Jager (championship convenor) and Alan Kirkaldy (treasurer). Since its establishment, the Union has grown to include over six hundred members with dojos in the Eastern Cape, Gauteng and the Western Cape. The Union has also been accepted as a member of the World Union of Karate Federations (WUKF) and has already lined-up a number of top international guest instructors to visit South Africa in 2018 and 2019.  The first of these international guests is Pascal Lecourt (France) who will arrive in Grahamstown for a seminar in late October. André Bertel (Japan) and George Best (England) will follow in 2019.