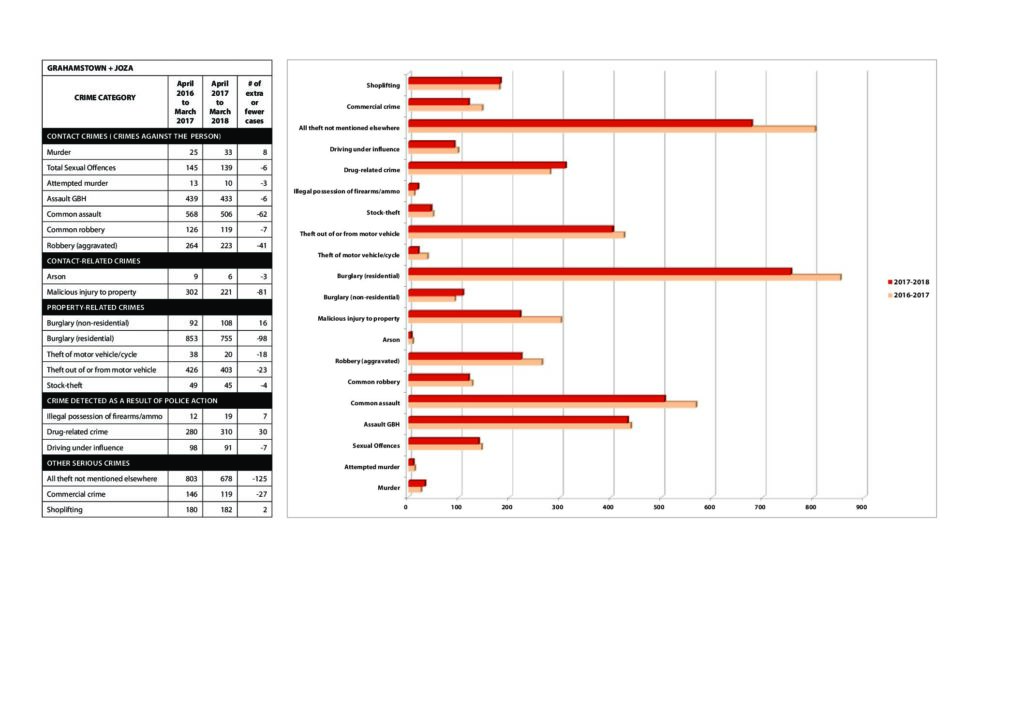 Residential burglaries and theft remain the dominant crimes in Grahamstown (Makhanda) according to the crime statistics released this week. ‘Crime situation in RSA twelve months 1 April 2017 to 31 March 2018’ compiled by the South African Police Service and Stats SA covers crimes that were reported in that period.

The crimes are ordered according to 21 categories. Of these, 17 are crimes reported by the public and four are ‘Crime detected as a result of police action’.

In summary, the document reports a 4.4% drop in crimes reported by the public, nationally.

The statistics do not indicate whether increases and decreases are as a result of a change in reporting, policing or criminal behaviour.

Likewise, with police-reported crimes, an increase doesn’t necessarily mean that crimes in these categories have increased. It could mean that police have been more active in detecting those crimes.

Although all have shown a drop of incidents since last year, the top five crimes in Grahamstown (Makhanda) remain (in order) Burglary (residential); All theft not mentioned elsewhere; Common assault; Assault with intention to commit grievous bodily harm; Theft out of or from motor vehicle.

Crimes that have increased since last year are shoplifting; illegal possession of firearms; and murder.

In the category ‘Crime detected as a result of police action’, drug-related crime reported at the Grahamstown police Station rose by 33.7% since last year – from 83 reported cases to 111. At Joza it was 197 to 199 – two more cases.

NOW READ: ‘The killer on our street – Drugs and Crime in Grahamstown’: Pages 7-10