Historic home in the spotlight 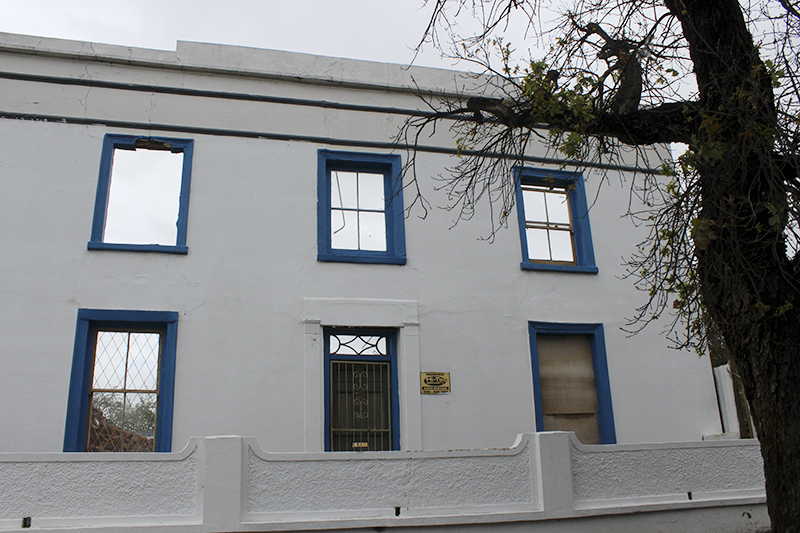 The front wall of the historic 68 Bathurst Street building. Engineers will assess how to proceed with construction of a store behind it, while retaining the building’s appearance. Concerned residents questioned the procedure followed before the demolition. Photo: Sue Maclennan

On the heels of recent uproar about construction on a historic site, Makana’s town planners and the provincial heritage authority say they’re determined to put better systems in place to navigate the conflicting values of heritage and development. Sue Maclennan reports

Developers are taking advantage of gaps in communication, processes and enforcement to build and demolish structures in Grahamstown (Makhanda), to the detriment of the town’s heritage assets. However, the building works at 68 Bathurst Street are not an example of this and are being done correctly, say officials and the developer.

“It’s unfortunate that this case is the one people have raised, because they have done it by the book,” said Makana’s Town Planner Gemma Meaton, referring to developments associated with the Caltex garage on the corner of Beaufort and Bathurst streets.

Concerned residents queried the legality of the building works under way there, given the building is older than 60 years, thus falling under the Heritage Act. A report by Curator Emeritus at the Albany History Museum, and Settler genealogist Fleur Way-Jones says the property appears on an 1824 map of Graham’s Town and the house was transferred to Settler shoemaker Joseph Richards on 12 July 1831.

In the report, Way-Jones notes that the Council’s Aesthetics Committee meeting on 20 June didn’t happen because no councillors attended. At the 18 July meeting, with no copy of either the Eastern Cape Provincial Heritage Resources Agency’s report or the Heritage Impact Assessment attached, the committee didn’t approve the demolition of the historic Georgian building.

By 20 July, the report says, “the house had been partially demolished with the east walls, roof and floors gone and leaving only the Bathurst street façade and a pile of stone and bricks at the back”.

What Way-Jones and other objectors found galling, they said, was that the ECPHRA’s Permit Review and Advisory Committee “meets in Port Elizabeth and decides on heritage projects in Grahamstown”. They objected to the retrospective approval of the demolition of a building “when ECPHRA has already taken the decision by the issuing of a permit” and the demolition of a building in the city’s conservation area with no Heritage report or first phase Heritage Impact Assessment (HIA).

The ECPHRA permit was issued on 14 August 2017 for “partial demolition” – which the objectors also found problematic.

“There was no mention of what part was to be demolished,” Way-Jones said. “Inaccurate information, lack of information and access to public documents raises questions about Engineering/Town planning Department in Makana Municipality, ECPHRA Permit Committee in Port Elizabeth and the office of ECPHRA in East London,” Way-Jones wrote. “Whatever the communication problem is, the result is the loss of yet another important and historic building.” Maxongo said the ECPHRA had been notified of the concerns.

“The issue will go back to the Permit Review and Advisory Committee,” Maxongo told Grocott’s Mail.

She said the committee would compare the plans with the building’s current status. “We will need to see which walls were identified for demolishing.”

However, the biggest lesson they’d learned, Maxongo said, was the importance of the public participation process.

“We’ve resolved that going forward, we will definitely seek opinion from interested parties in Grahamstown before dealing with approvals there.”

As far as Makana Municipality is concerned, the processes followed for developing the erf were followed correctly.

Building Control Officer Gcobisa Mfeti said the developers had submitted an application and they had tabled an item for the Aesthetic Committee.

“The Aethetics Committee refers most applications to ECPHRA for approval. For this reason, we usually advise developers to apply to both ECPHRA (which takes two to three months to reply) and Aesthetics simultaneously.”

Town Planner Gemma Meaton said the applications had been submitted on time, before the work took place.

“The remit of the Aesthetics Committee is to approve alterations to the façade. All other alterations are approved or not in terms of the National Heritage Resources Act and are referred to ECPHRA as per national legislation. This is why decisions are taken in Port Elizabeth [about buildings in Grahamstown/ Makhanda],” Meaton said.

“The Aesthetic Committee’s approval is only necessary if the façade is being altered. This façade isn’t being altered. So in this case, the reason it’s gone before the Committee is for information purposes and not for approval. The alteration is not actually contingent on their approval but ECPHRA’s.”

As to the permit being non-specific, Meaton said it was clear: “The permit says ‘Partial Demolition – may not deviate from approved drawings’. The permit itself doesn’t specify, but the drawings were submitted. Those approved drawings are exactly what is required.”

Way-Jones said it was regrettable that no historical record had been made of the building.

“If I or a member of the Museum had known the demolition was going ahead, then the owner could have invited us to take photographs and sketches of the exterior and interior as a historical record,” Way-Jones said.

“But it is also part of the HIA recommendations. When a partial (facade) demolition is approved, preservation by record is the responsible heritage solution.”

Owner of the site and the adjacent garage Jon Campbell showed Grocott’s Mail the ECPHRA approval, as well as the approved building plans and drawings.

“The approval Provincial Heritage have given us is conditional,” Campbell said. “One was obviously [building plans]approval which is done; the second was that we stick to the plan on our application. I have all the permits.”
Campbell said the plan was to retain the façade and build a small convenience store behind it.

“We will build another wall on the inside of it to strengthen it – I believe they did the same thing at the Lewis Stores building. That wall forms the outside layer of the shop. The rest of the building, as you can see on the plan, carries the same look throughout. Inside that is the store.”

However, now that the wall was exposed, there were concerns.

“The problem is it’s not a 3-4-metre wall: it’s about 8 metres high and it’s a danger,” Campbell said. “I’m getting the engineers on site and asking them where I can go from here.”

He said there appeared to be no foundations. “It’s built on shale – that’s the way they built then.

“The idea is to pin it and build a wall on the inside – depending on what’s in that wall. What I see there scares me, but it’s the engineers who must say what needs to be done. One thing we can’t do is build a trench next to it for the foundation for the second wall, because it will all come tumbling down. They’ll probably have to drill small holes, put a Meccano-type frame in and stitch that to the wall.”

Campbell said any member of the community who wanted to come and have a look at the site is welcome to email him at jc@fpnp.co.za

“We acknowledge the value of heritage assets in the municipality,” said Town Planner Gemma Meaton. “We acknowledge that it’s one of the town’s major selling points. It’s one of our competitive advantages as a town and as a municipality. It’s something that has been neglected recently and we need to rectify that.”

The department had set targets for improving the way they deal with heritage issues.

“A lot of it is about communication. We’ve got the bylaws in place; we’ve got the Radford Report; we’ve got an Aesthetics Committee – we’ve got all that but somehow it’s not quite translating correctly.”

Implementing standard operating procedures was a start – “what to do when we see a building plan application that has heritage (ECPHRA and AC) or environmental (DEDEAT) issues”. Both internal communication and external liaison with provincial bodies needed to be clarified.

“There is economic value attached to heritage, and economic value gained from development. As a municipality we need to be able to negotiate those two potentially differing ways forward in terms of development,” Meaton said. “It’s our job to look at those issues and steer the town towards long-term prosperity as opposed to a situation where developers look for short-term benefits.

“There are things being done that are not in line with the law. There’s a gap in the municipality. We admit that we need greater enforcement. Often there is approval after the fact – that is happening. But it’s unfortunate that this case [68 Bathurst Street] has been brought up in this context: they are not an example of this – they have followed the correct procedure to the letter.”

HAS THERE BEEN ENFORCEMENT IN MAKANA?

Meaton confirmed that illegal alterations to a building in the McDonald Street conservation area had been reported to Makana Building Control in 2017, who in turn reported the matter to ECPHRA.

“They didn’t want to comment because the alterations had already been done and it was referred back to the Aesthetics Committee,” Meaton said.

The owner had been charged a R5000 fine in mitigation of the damage. Plans for the alterations were approved for the building retrospectively, in January 2018. Grocott’s Mail has seen these approved plans.

It was a concern that alterations were being done before plans were approved, Meaton and Mfeti noted.

WHAT TO DO IF YOU’RE CONCERNED ABOUT A DEVELOPMENT

Mfeti has initiated a drive-around system to routinely check for unaccounted for building operations in the municipality. But with three building inspectors and one Building Control Officer, they don’t have the capacity to monitor every site. “For this reason, we’re often reduced to dealing with complaints,” Meaton said, “often after the fact”.

Meaton and Mfeti encourage members of the public who are concerned about developments in and around the city to contact the town planning office in Joza.

“We will check if there are plans, send a building inspector out and, if necessary, issue a notice in terms of the Building Act to cease and desist until they’ve submitted plans.”

A builder had 21 days to submit the plans. Failure to comply means a second notice is issued, followed by a court order.