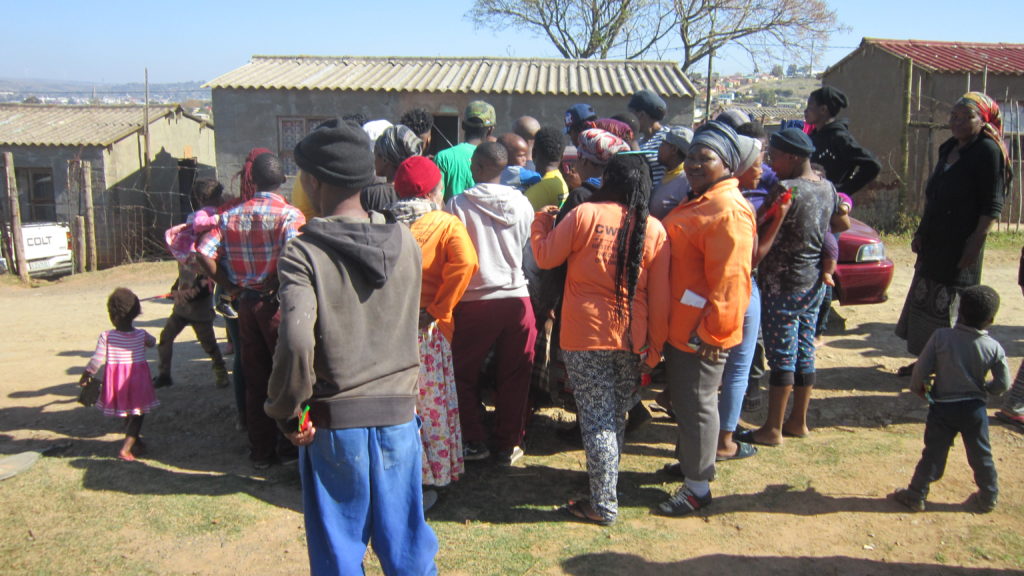 Vukani residents surround the car of a pastor handing out sweets on the street on Thursday 30 August. Photo: Lindani Donyeli

When sweets rained on the streets like manna from heaven this week, Vukani’s children couldn’t get enough of that religion. But it left a bad taste in the mouths of local shopkeepers, who accused the well-meaning pastor of doling out expired goods.

The incident came during a week of xenophobic looting in Soweto, fanned by rumours that shops were selling food products past their expiry date.

The pastor, whom we are not identifying because of heightened sensitivity around the issue, told Grocott’s Mail he had been given the sweets by a local retail chain. There was nothing wrong with them, he’d been told, but because of the shop’s policy on expiry dates, they had to go.

Grocott’s Mail noted the dates on some of the items, which ranged from February 2018 to June 2018.

His car loaded with sweets, chocolates and sour straws, the pastor handed them out to a growing queue of delighted children and adults.

Not everyone was pleased though. Local shop owners objected, saying the pastor was handing out goods past their expiry date. One shop owner  even suggested they should call a security company to stop what was happening.

According to the website eatbydate.com chocolates stored outside a fridge or freezer are safe for consumption two to four months after their printed expiry date.

The store.approvedfood.co.uk website says chocolate may taste a little different but is still safe up to eight months after its best before date. “Chocolate doesn’t have water in it, and bacteria needs water to be active and cause harm,” the website says. “That means bacteria can’t survive in chocolate, hence chocolate products do not come with a use-by date. Even if the chocolate has changed in colour or if blooms appear (the little white spots that you sometimes see), it is still safe to eat without risking food poisoning.”

The British Food Standards Agency website www.food.gov.uk gives the general advice to charities supplying people with food that they still need to check and follow the ‘use by’ dates. “Giving out food after its ‘use by’ date puts people at risk,” is their general verdict.

IS FOOD BEING PREPARED AND SOLD IN GRAHAMSTOWN (MAKHANDA SAFE?)

No concerns about the selling of expired foodstuffs have been raised at an official level In Grahamstown (Makhanda).

In the Public Safety and Community Services portfolio committee meeting earlier this month, Makana’s Environmental Health and Cleansing officers were praised by councillors for how many outlets they routinely inspect. The department submits three-monthly reports on these inspections, which are included in portfolio committee agendas. The committee meets every two months.

Over the three-month cycle, premises inspected include restaurants, cafes and take-aways (34), general dealers (30-40 – many of the immigrant-owned spaza shops fall in this category), butcheries (7) and bakeries (5).  The report for April-June 2018 indicated 100% compliance with public health requirements.

One incident of food poisoning is recorded in the report – the case of 34 members of a local school choir admitted to hospital on 11 April with diarrhoea and vomiting after an extra rehearsal. The report found they had eaten chicken and rice cooked at a member’s home, and left out of the fridge.

Other kinds of operations the health officers inspect in Makana are funeral homes and undertakers, laundries and dry cleaners, the town’s one food factory (Carara Agro-processing), hotels and B&Bs.

It is Environmental Health and Cleansing officers who test water supplies and who were responsible for red-flagging the high e.coli levels in Grahamstown water earlier this year. The results of the tests in April, are documented in the 15 August agenda. This threat (high e.coli levels in the water) has been resolved according to official sources, as well as a citizen-led water-testing group.