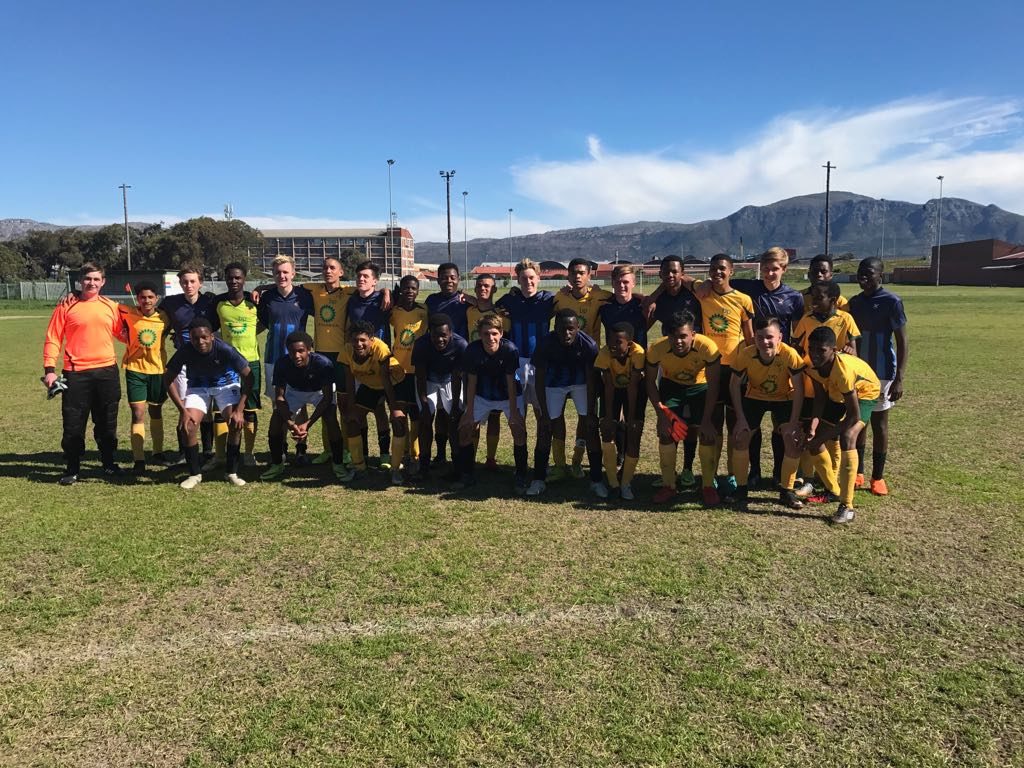 The St Andrew's U19 soccer team seen with the Tramway players. Photo: Supplied

The St Andrew’s College Football Club (SACFC) enjoyed a great tour of the Western Cape last week. The St Andrew’s U15, U17 and U19 teams took part in a training camp on 8 August, before going on the tour.

On their way to Cape Town, the teams played friendly matches against Tramways Football Club on 11 August. The SACFC tour of Cape Town got underway against the very skillful young players from Tramway FC. The St Andrew’s U15 A team went down 1-3 in the first game of the day, having worked hard to hold their opponents to 1-all for most of the match. The U17 A team came back strongly in the second half to make up a two goal deficit, leading 3-2 until the dying moments when a superbly struck free kick saw Tramway draw level. The First team dominated their encounter, running out comfortable 4-0 winners. The club greatly appreciated the warmth of reception and efforts made by Tramway and in particular, Dr Nasief van der Schyff.

The following day saw the boys engaging with some of the Cape’s top youth coaches, including legendary 81 year old Basil “Puzzy” Jacobs who was vital in the formation of South African greats like Quentin Fortune and Benni McCarthy. Theo Hemp, who, after years in the PSL and NFD as player and coach, now runs a football academy, and Nasief van der Schyff, the chairman of Tramway FC.

“We are so grateful to the club and the coaches for giving up their Sunday morning to coach our boys. We all learnt a lot and from the laughter on the field also had a lot of fun,” said Tim Barnard, St Andrew’s soccer coach.

On Monday 13 August, the First team enjoyed an emphatic win, by four goals to one, against Bishops. The U17s were competitive to the last, but hesitation in front of goal saw them go down 1-2. The U15s just couldn’t overcome the resolute Bishops defence despite dominating possession, drawing 1-1. “We have loved having the support of parents and friends,” said Barnard.

On Tuesday 14 August, the teams enjoyed a hectic day of football with five hours of 5 vs 5 futsal for the senior teams, with the U15s playing the first two and half hours before leaving for a match against Hout Bay International School.  The stunning view did little to distract the team who ran out comfortable 4-1 winners against Hout Bay. “A scenic drive via Chapman’s Peak home was a fitting end to a god day,” said Barnard.

On Wednesday 15 August, the St Andrew’s boys attended a Cape Town City FC training session before meeting players and coaches. The U15s then faced Rondebosch, the U17s were up against Hout Bay and the U19s faced the much lauded Wynberg teams. The day began with the touring party watching PSL club Cape Town City’s training session at Hartleyvale, followed by a chance to meet their players and coaching staff, and to listen to their coach and manager Benni McCarthy. The teams then moved on to their match venues, with the U15s losing to Rondebosch 0-1, the U17s beating Hout Bay International School 3-2 and the First team losing to the well organised and skillfull Wynberg team by one goal to six.

Freezing wind, driving rain and mud made conditions tough on Thursday 16 August. The First team managed a battling 3-2 victory over Reddam, but the U17s and U15s were up against it in their Wynberg matches, losing 1-6 and 0-5 respectively. “Hot showers and fried chicken dinner from the ladies from Fran’s place soon restored spirits”, said Barnard.

The St Andrew’s College Football Tour ended on Saturday 18 August with a great result for the U15 A team beating Imizamo Yethu FC by three goals to one, and very competitive matches against Rondebosch, with the U17s losing 0-3 and the first team going ahead and dominating in the first half, and being worn down, losing by 1 4.