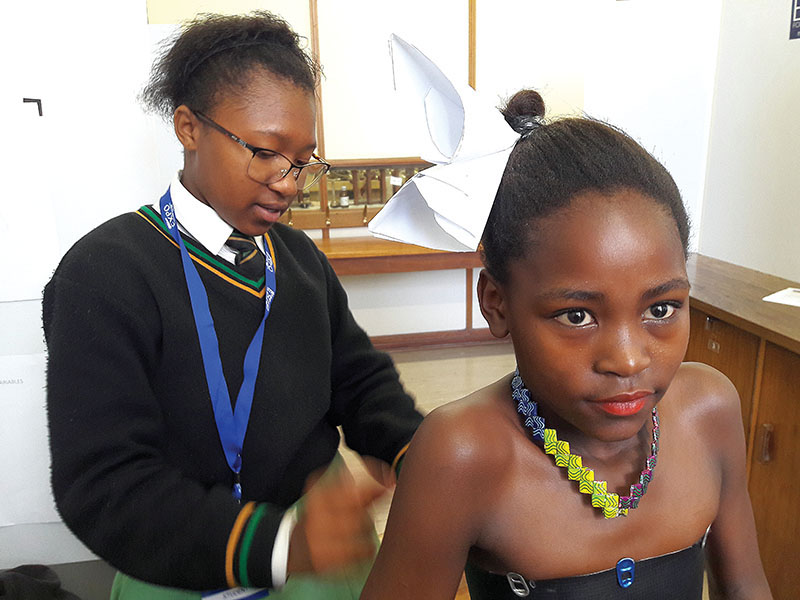 Siyanda Siphosethu Mkonko of Nathaniel Nyaluza Senior Secondary named her work the Valentina Project and she used her sister to model Abenathi to model one of her creations. Photo: Steven Lang

Victoria Girls’ High School won four out of the five gold awards at the regional finals of the 2018 Eskom Expo for Young Scientists held at Rhodes University on Saturday. A grade 10 pupil from Ntsika Secondary School won the remaining gold.

Kate Jackson-Moss received gold for her project investigating round worm resistance to commercially available deworming chemicals, and like the other gold award winners she will receive a Rhodes University bursary.

Ntsika’s Aphiwe Koliti won gold for his aquifer tank, while Nicola Kroese and Abongile Nokenke collaborated on their project measuring the effects of CO2 on seed germination.

The youngest gold winner, Tosca Stoloff, compared mussels for her prize, ‘Mytilus vs. Perna – which is the ultimate survivor?’.

Cassidy Doyle received the final gold award for her research examining whether light wavelength affects the growth rate or germination of plants.

The Eskom Expo for Young Scientists is South Africa’s only National Science Fair. It invites learners to enter a project exhibiting their own scientific investigation. This competition aims to inspire and develop young scientists who are able to identify a problem, analyse information, find solutions and communicate findings effectively.

The winners of the 36 regional finals, held between July and September, will be selected to participate in the national finals in Johannesburg in October.

Every year, the Grahamstown branch of WESSA donates a special prize for the best environmental project and Mvuyo Prince from Nombulelo won this prize for his project, ‘Changing attitudes towards illegal dumping’.

The Grahamstown regional leg of the competition had a total of 187 science projects representing 20 different schools.