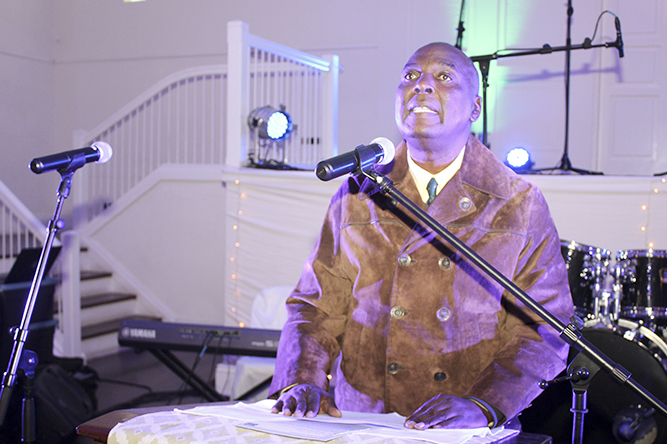 Gadra Education celebrated their 60th anniversary on Wednesday 8 August on the back of their milestone 2017 achievement of 100 matriculants successfully registering at Rhodes University. The NGO serves and supports public education in Grahamstown (Makhanda), bringing to children from disadvantaged backgrounds or poorly resourced schools a network of tutoring and financial support.

Chairperson Dr Ken Ngcoza introduced a celebration in the Drill Hall with a heartfelt tribute to the town and its people.

“That this organisation has remained alive for 60 years is testimony to the richness, depth and ubuntu of our community,” said Ngcoza.

Ngcoza lectures in Science Education at Rhodes University. He, along with other distinguished professionals including Judge Lex Mpati and the late Judge Bonisile Sandi, were among thousands of Grahamstown children and youth who benefited from Gadra bursaries.

He noted how from its beginnings as a “second chance” school established in 1994, the Gadra Matric School had become Rhodes University’s biggest feeder school.

“It is a great source of pride that Gadra continues to respond to the challenges facing youth in Grahamstown and beyond,” Ngcoza said.

Rhodes Dean of Education Professor Di Wilmot stood in for Vice Chancellor Dr Sizwe Mabizela as keynote speaker. Mabizela had travelled to Johannesburg for student Khensani Maseko’s funeral. She spoke about the depth and extent of the relationship between Gadra and Rhodes to revitalise public education in Grahamstown.

Wilmot recalled Mabizela’s statement at his inauguration that Rhodes should not just be an institution in Grahamstown, but should also be for the city.

From initiatives aimed at township high school pupils such as the 9/10ths programme at Ntsika, Nombulelo and Mary Waters, there was now a growing focus on early childhood development through the Vestas consortium, which provided better integrated interventions, and support for primary schools.

The partnerships continued to develop, with 10 registering at Rhodes as occasional students in 2017, while upgrading their matrics in a new bridging course.

When he published the details of how the majority of people in Grahamstown were surviving, it burst like a bombshell, shattering… the complacency of the city’s establishment – town, gown, church and state.

Relieving distress… transforming education
At the 60th anniversary celebrations, Margie Keeton spoke about the amazing history of Gadra and the people involved. Read her address at the link below.