Runaway trampoline causes a commotion on the R67 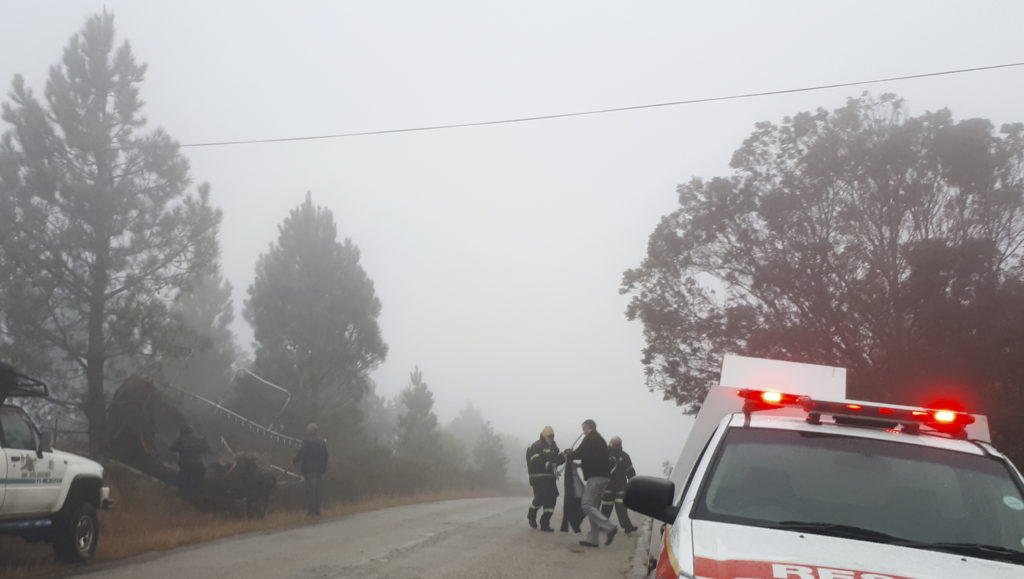 A runaway trampoline caused a commotion on the R67 on Friday 10 August. Photo: Sue Maclennan

Animal whisperer Basil Mills made his strangest capture yet outside Grahamstown (Makhanda) this morning after “something big” careered across the road just in front of him as he drove towards town on a misty Port Alfred road this morning.

“All of a sudden I saw this huge thing moving across the road,” Mills told Grocott’s Mail. In the mist and rain, he couldn’t make head or tail of it at first.

“At first I thought it was one of [nearby game reserve owner]Warne Rippon’s elephants,” he told Grocott’s Mail.

Mills pulled over, took out a long rope that he keeps in his bakkie and approached the thing which had by now lodged itself in the bushes next to the road.

“I couldn’t believe it when I saw it was a trampoline that had escaped,” he said. “I lassoed it anyway so it couldn’t go any further, or back into the road.”

When Grocott’s Mail arrived around 9am, Mills was warning traffic to slow down while community members helped local emergency services wrestle the large trampoline off the R67 in the rain, strong winds, mist and 8C cold. After partly dismantling it, they were able to drag it across the road and back to the property where it belonged.

Mills has for decades been Grahamstown’s (Makhanda’s) go-to person for difficult or dangerous animal captures – especially snakes. “That definitely was the strangest creature I’ve ever had to catch,” said Mills, whose farm has been home over the years to a crocodile, a python, ponies and a flock of ferocious geese, among other unusual pets.

Accuweather had the wind coming from the coast at south-south-west 22km/h gusting at 39km/h this morning. Grocott’s Mail rain watcher Jim Cambray had recorded 13mm by 10.15am and the temperature still 8C at 10.40am.

“Best rainfall we have had in a while – my tanks are almost overflowing,” Cambray said.

It turns out trampolines in high wind are a thing, with an Australian trampoline retailer providing a detailed tutorial on how to secure a trampoline for high winds: bit.ly/GrocTrampoline

Previous ArticleThis is the GBS Mountain Drive
Next Article Nkosiiking: Rapper with a mother’s message