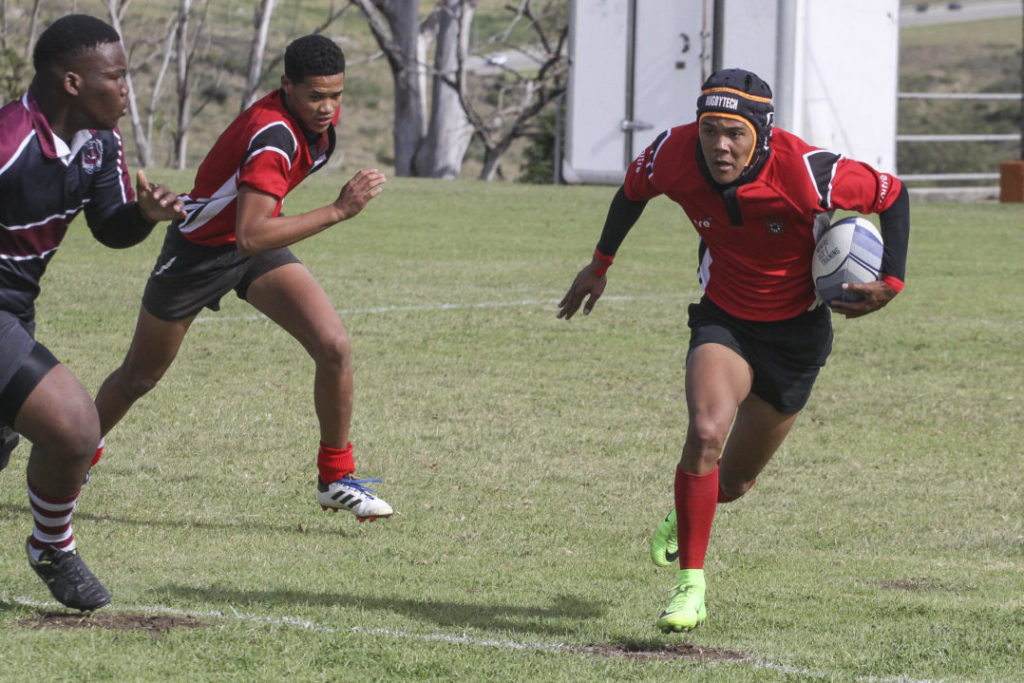 PJ Olivier enjoyed their final game of the season with an emphatic 43-10 win over Stutterheim. Photo: Supplied

The PJ Olivier First team produced a dominant performance against Stutterheim High with a comprehensive victory at PJ Olivier on Saturday 4 August, in their last match of the season. A large crowd came out in their numbers to support and rally behind PJ for their last school’s rugby fixture. PJ did not disappoint, running in seven tries in a highly entertaining encounter.

The hosts provided most of the entertainment as they played running and exciting rugby from the outset. despite heading into the match with a few key players lost to injury, PJ ran out full of confidence. The exciting, skilful, speedy and explosive backs of PJ were once again on fire and dangerous with ball in hand on attack. The small and deceptive flyhalf of PJ, Alanzo Gysman scored the first of his two tries early in the tenth minute of the first half. Thereafter, the home side scored two tries, in the form of centre Azi Nqokoza and scrumhalf Keano Felix. Valno Olifant converted one try to make it 17-0 at halftime.

PJ Olivier opened the floodgates in the second half and dominated all facets of the game. Stutterheim’s bigger forwards came to the party to provide some momentum as they were rewarded with two unconverted tries. Gysman scored his second try after some good passages of play to extend the lead to 22-10.

It was one-way traffic thereafter, as PJ played with more confidence and with higher intensity. The hardworking flanker, Davien Douglas, who was all over the place the whole day, scored two magnificent tries in the second half and was also voted Man of the Match for his brilliant all round performance. He was dangerous both on attack and defence. Reserve winger Solly Koesnel also added to the scoreboard with a try in the second half. Olifant converted two while Nqokoqa one to gave PJ a well deserved 43-10 win in the end.

This ended another successful season for PJ Olivier’s First team. The rest of the results on the day also went the way of the hosts, with the U15 side thrashing their counterparts by 46-29, while the PJ U16 side sneaked in a 24-22 victory.