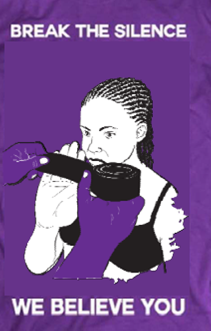 She asked, “What do we mean? What are you saying when you say it happened all the time in school?”

Think about the question for a minute before reading on. It is not as simple as it seems.

How we speak about and respond to violence matters. “It happens all the time” points to the crisis, debunking the myth that it is shocking and expressed in isolated incidents. That phrasing also suggests that it is commonplace, normal: “All the time”. It happens. The truth is that it does not just ‘happen’. Individuals choose to rape and they make this choice because it is an available one, and one that is mostly without consequence to themselves.

But there is a cost – a huge, devastating cost that comes with rape – an invisible wound that remains long after the physical scars (where they exist) have healed. And what a cost to us to have so many of our people walking wounded.

As a society we can do so much better.

Before the Zuma Trial, I was much more hopeful about our fight against rape as a society even when confronted by the statistics. I believed most people when they said they opposed rape, even though I was very aware of South African hypocrisy when it comes to gender power. After the trial, having witnessed what happened outside, how far people were willing to go to terrorise a woman in defence of a powerful man, it is clear to me that something drastic needs to change before this culture consumes us whole.

We need new tools, not in place of, but in addition to the current anti-violent strategies we have. Holding rapists accountable is a start. (We need an) understanding of how rape is possible: because to treat women as though they do not matter is deeply ingrained in our culture as South Africans.

Ending rape is going to require that we interrupt all the narratives of rape culture. It requires honesty about the fact that there are systems that support rape culture and that the ways in which we support rape survivors matters…In addition to the current strategies of marches and protests, we need to find new ways to make violent men feel unsafe and to end the impunity with which they enact violence. Many aspects of our public gender talk need revisiting. Many forms of violence happen in plain sight and sometimes with the active complicity of spectators. What are we saying to survivors of sexual assault when we ask them to break the silence even though we avert our gaze when other forms of violence and humiliation of people happen in our presence?

How can we shift our perspectives and behaviours in ways that make it harder for violence to happen in our presence? How can we render violators unsafe? Why is it that most of us look away ….

It is time to apply pressure on men who rape, those who make excuses for rapists, those who make rape “jokes”, and to pressure our government to create a criminal justice system that works to bring the possibility of justice to rape survivors and all other survivors of violence. The silence we must now break is the silence around the identities of rapists in our midst. It is no longer acceptable –or convincing – to pretend that men who rape women, children and other men are a small fringe minority of men we do not know. Most survivors know their rapists. It is simply not possible for a small minority of men to hold a country hostage in this way.