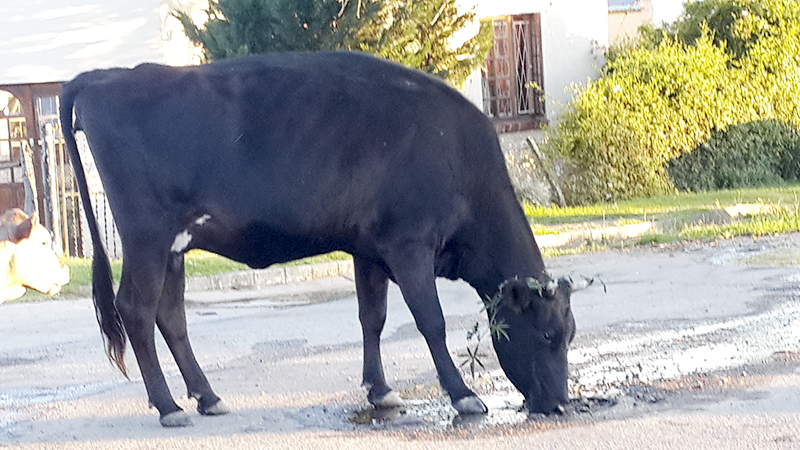 A cow drinks from a pothole in Grahamstown (Makhanda) in this 2016 file photo. A R10 million CBD roads upgrade is expected to be finished by the festive season. Photo: Sue Maclennan

Road upgrades in the Grahamstown (Makhanda) CBD could be the city’s R10 million Christmas present after the Municipal Infrastructure Support Agency (MISA) advertised the bid on Friday 27 July.

“Depending on the response, there should be a contractor appointment early in September,” Ndalasi told Grocott’s Mail. “We expect that the work will be completed before the festive season.”

The CBD would be the focus of the initial upgrade work. “The immediate concern is the potholes,” Ndalasi said. “But we are not patching them. It will be a complete overlay.”

He said even this would be a temporary measure because after two years, infrastructure upgrades would mean digging up sections again. He said R195m was needed to do proper rehabilitation of underground water and sewage reticulation.

“We are assisting with applying for more funding and it could be this financial year or the next that it comes through,” Ndalasi said. “It depends on Treasury.”

Mkhize made the R10m commitment to then acting municipal manager Ted Pillay during the Minister’s visit to Grahamstown in early May 2018.

Pillay said Engineering Advice and Services would supervise the work and professional costs (around R1m) would be borne by the Sarah Baartman District Municipality.