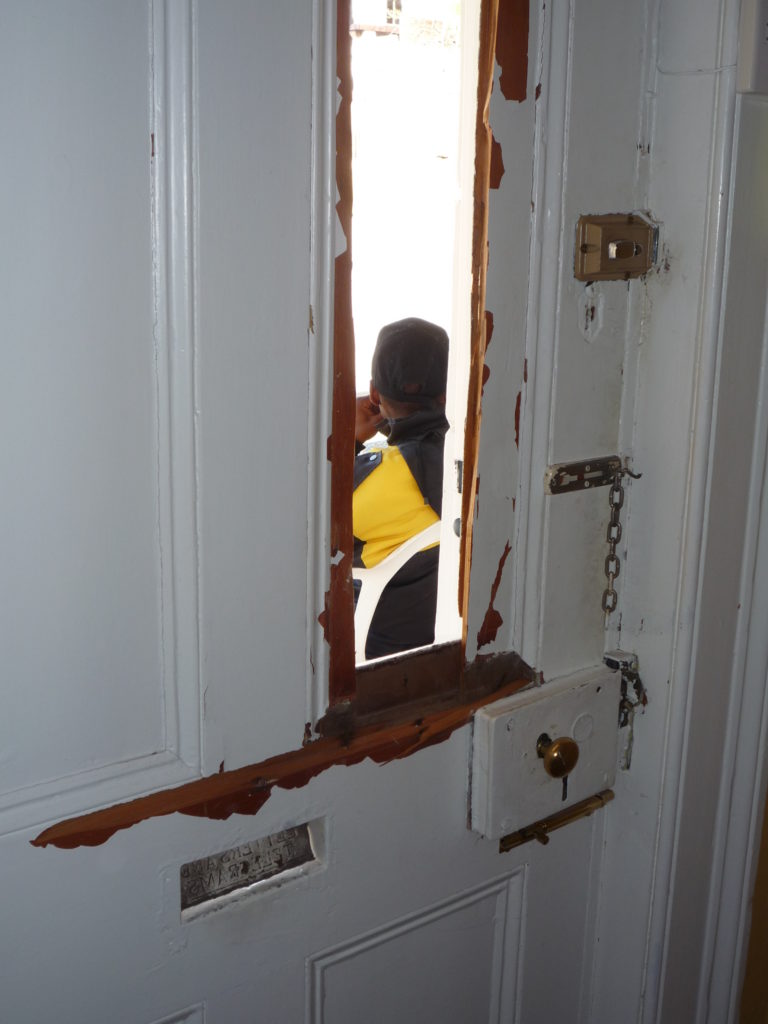 A local couple remains traumatised after a harrowing break-in at their home in Sunnyside mid-July. This follows a noticeable increase in crime throughout Grahamstown (Makhanda) and surrounding areas. Police and security officials suspect the increase could be drug related.

Early morning 19 July, the couple awoke to an intruder breaking through their front door. “There was someone on the outside of the door, breaking through one of the panels,” they told Grocott’s Mail.

The intruder had already broken through the metal security gate using an object – such as a crowbar.

“It was quite scary, he had a sort of mask on. He had painted the top half of his face white,” said the husband. “When he saw me he started screaming, ‘keep away, I’ll kill you!’”

The couple pressed the panic button and feared for their lives. The alarm did not phase the intruder, who proceeded to unlock the door and make his way into the home. He demanded cellphones.

“He was in a crazed and psychotic state,” the husband added. “I’ve never experienced such intense focus, force and adrenaline.”

The couple suspects the crime was a result of drug-use.

Statistics from the police suggest a strong link between drugs and violent crime, specifically robbery and theft.

In a Regional Court case earlier this year two Grahamstown (Makhanda) brothers were accused of selling drugs from their family home. The subsequent effects on the community were shocking, including endangering the lives of minors at a nearby education institution.

Hi-Tec and SAPS were at the Sunnyside home within 10 minutes, but the intruder had already fled the scene.

“For the last couple of weeks since the Festival crime has gone up, more serious crime, not the petty crime we’ve been having,” said Hi-Tec Assistant Manager, Kenny Knoetze.

“It is very serious. We are concerned, but we are working with a plan.”

The style of crime in Grahamstown (Makhanda) has become more violent. As residents improve security in their homes and businesses, criminals result in using more force and creativity.

Recently criminals have used roofs as an entry point into buildings. “We’ve picked that up in the last couple of weeks,” said Knoetze.

Exact reasons for the crime spike are unknown, however there is speculation that the recent release of parolees is a contributing factor. Grocott’s Mail is investigating this claim.

“Your normal street robberies and house break-ins are definitely from guys that have just been released,” said Knoetze. “We all know them. Not long they’ll be back in jail, but then next year we will see them again.”

“The other failure on our side is the justice system. You arrest the same people over and over but the jails are so full the guys are coming out every second month.”

Though Hi-Tec officials and SAPS continue to work together to combat crime, residents are encouraged to take extra precautions.