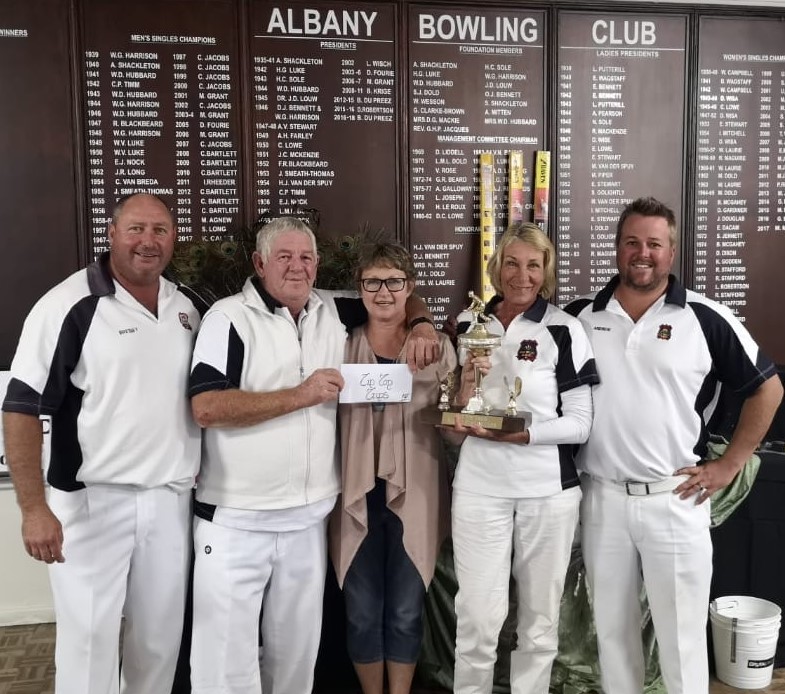 Sixteen teams from Port Alfred, Kenton, Fort Beaufort and Grahamstown took part in the Second Albany Tip Top Trips last weekend, and for once, our local weather played ball, with competition seeing an abundance of great bowls, snappy banter and plenty of refreshments.

For the second year running, the Albany team of Deon Fourie, Andrew Sterley and Marlene Mitchener took first place. Second place went to combination of Grahamstown and Albany players Allie Daniels, Marcelle Burgess and Dennis Stuurman.  Making sure that they kept some of the top prizes in the family, third place went to Bresby du Preez, Thelma du Preez and Kallie Calitz also from Albany.

On behalf of all their members, the Albany Bowling Club committee wanted to thank Di Coetzee from Tip Top Butchery for the sponsoring this competition.

“Their contribution to the success of the Tip Top Trips is invaluable to our club and without their involvement, we could not host a tournament of this magnitude,” said Marlene Mitchener from Albany, “Special thanks must also go to Jetta and Quentin du Preez for all their hard work, support and generosity.”

In addition to the R7,000 top three cash prizes sponsored by Tip Top Butchery, all the players who participated got an individual prize; with many blown away by the quality of the prizes.