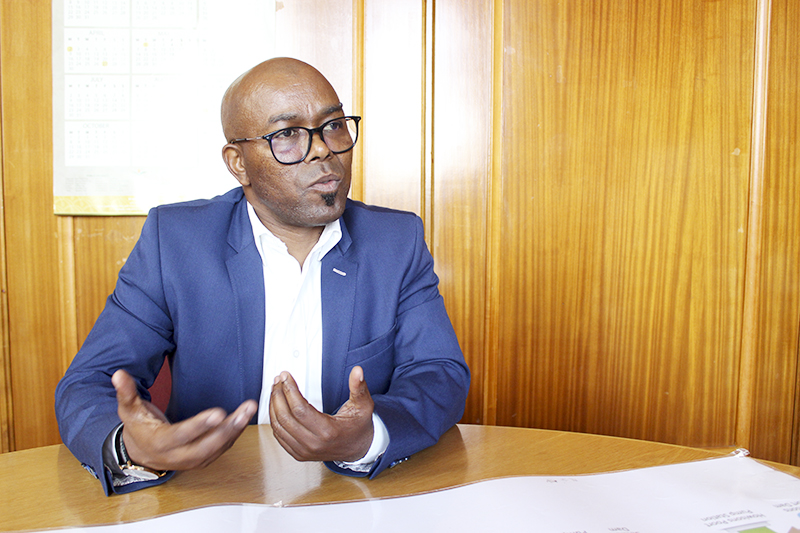 Newly appointed Municipal Manager Moppo Mene is very worried about Grahamstown’s (Makhanda’s) water. Spread out across his desk when Grocott’s Mail walked into his office yesterday morning – his second day at work – was a wall-chart-sized schematic diagram of the City’s supply.

Road infrastructure, refuse management, nurturing an active citizenry and stimulating economic development are among Mene’s other priorities as he lands in what must be one of the country’s most fraught and difficult political and socio-economic environments.

“My ideas and strategies are around creating an institution that moves from a negative position to a positive on, and a Council that listens to communities.” Mene arrives after the budget and IDP have been more or less cast in stone – and he admits that’s a serious challenge.

With 25 years experience in public administration, Mene believes he’s proved his ability in the field.

His qualifications include a degree in Public Administration from Peninsula Technikon, a B.Tech from Unisa and Masters from NMMU, and a further degree in Knowledge Management at Stellenbosch University.

Mene was among the team that established local governments in 1995.

What follows are some interview highlights.

“The upgrade at James Kleynhans [i.e. to increase the supply from 10 megalitres to 20ML] is scheduled for 2022, but Makana can’t wait that long,” Mene says.

For water instrastructure and other areas, he intends to be systematic about eliciting grant support from National Treasury to speed up these processes.

However, planning and water resource management are as important, Mene says.

Fundamental to that is buy-in from the community and other stakeholders.

“We can make plans and if citizens don’t know about them, there will be no positive response. I intend to invite stakeholders to participate in planning,” he said.

“Education, tourism and history are the fundamentals of Makana’s economy,” Mene said. “Economic development must rotate around these and enhance them otherwise it will be out of synch. It’s important for us to understand how best to serve these communities.

“As far as economic growth is concerned, we must allow business to do business,” Mene said. “That way they can create jobs.”

Mene said he had been briefed on cases under way. “We will deal with outstanding cases,” he said.

“There will be zero tolerance for corruption.”