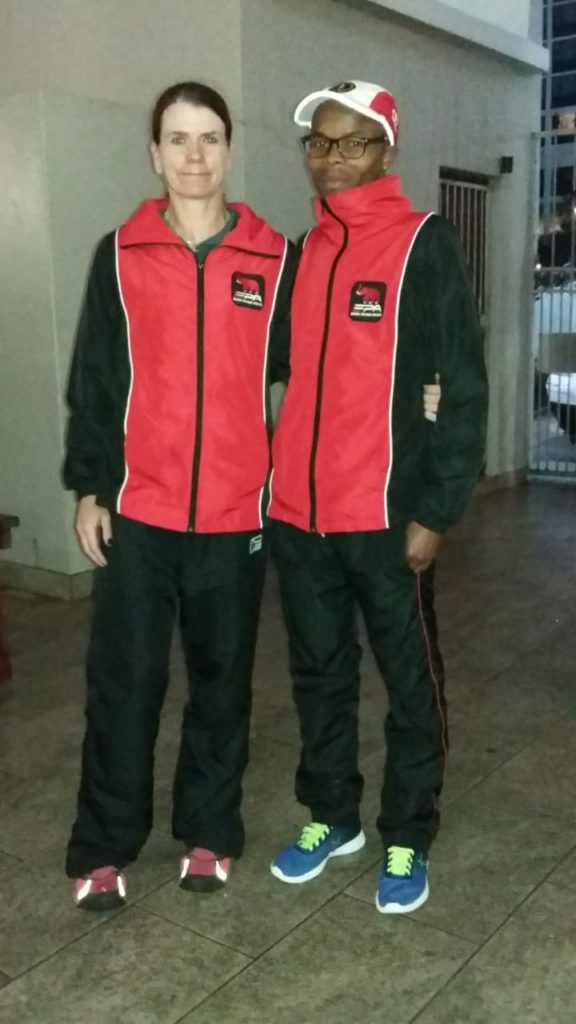 Two of Grahamstown’s (Makhanda’s) local long distance running stars traveled to Port Elizabeth’s Pollock Beach to take part in the SA 21 km Championships on Saturday 28 Jluly. Terri-Lynn Penney was joined by Masixole Xayiya for the half marathon as part of the Easter Province team.

Penney, who has previously represented her province nine times, was excited to race again as part of the EP team. “The race was awesome,” said Penney. “It was a special moment to run with the cream of the crop of 21km runners on SA.”

Penney, who finished as the 13th vet out of 70, added “I felt very confident racing [in the]SA [champs], as I knew I did the training for the run and knew the course quite well. I was happy with my race, but I expected to do better. I didn’t run the time that I wanted to.”

This was the first time that Xayiya had been selected for the Eastern Province side, and he enjoyed his time representing his province, despite carrying an injury. “The race was so perfect,” said Xayiya, “but I had a little bit of an injury in my leg on Friday before the race.”

Having ran the Two Oceans earlier in the year, Xayiya wants to improve on his time if he gets selected next year. “I enjoyed my race, but hopefully next year I can do better,” said Xayiya. “71 minutes is my target.”

With the running year coming to a close, both Penney and Xayiya are looking to finish strong. Penney will compete in the EP Cross Country Championships on Saturday 4 August, before hopefully representing EP in the SA Cross Country Champs on 8 September. Although she is not focused on it at the moment, Penney is also ready to tackle the GBS Mutual Bank Mountain Drive Half Marathon at the end of August.

Xayiya, for his part, will likely miss out on the GBS Mountain Drive this year due to the injury, but he has said that it is his favourite local race and wishes all of the racers luck ahead of it.