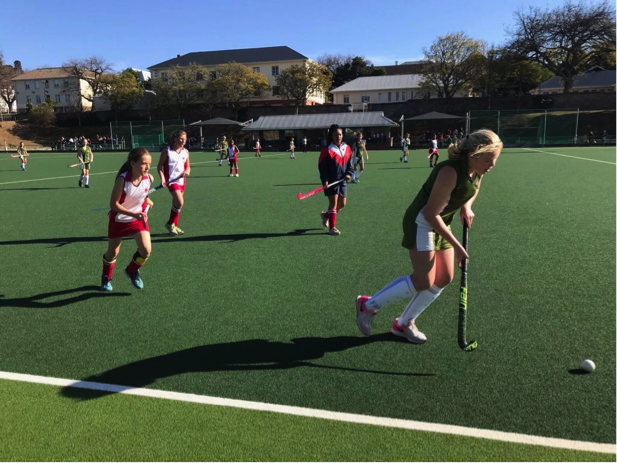 The DSG U13 B side on the attack against a good Hudson Park side on Saturday 28 July. Photo: Laura du Toit

On Saturday 28 July, Diocesan School for Girls Junior (DSG) hosted Hudson Park for a series of exciting netball and hockey matches. The matches commenced early in the morning, with clear skies adding to the great mood.

Hudson Park proved to be a tough opponent for the DSG girls on the netball court. Nevertheless, the DSG girls showed true determination. The U10 B team were the only team able to secure a 8-3 victory. Unfortunately, the U13 teams were unable to play due to Hudson Park not having u/13 teams.

“The hockey scores were a different story and DSG only lost one game,” said DSG sports coordinator, Patti Tooley. The U10 B and U11B DSG teams displayed excellent team effort and managed to win each of their matches 4-0. The DSG U10 A side won 3-1, while the U11 A were the only hockey side to suffer a defeat on the day, losing 1-2 in a close battle.

The most anticipated matches on the day were the U13 A and B hockey teams. The U13 B side showed impressive determination which resulted in a 3-0 win for the hosts.

The DSG U13 A team dominated the first half, scoring two goals. Hudson Park picked up their intensity during the second half but DSG’s defense was more than a match for their opponents, who kept out the Hudson attack to end the match 2-0 victors.

Coach Cathy Munro displayed immense pride for the young team. “[I am] very proud of the girls for their perseverance and determination to finish the game strong. We only have one more fixture this coming weekend and we are hoping to end off the season on a high note.”