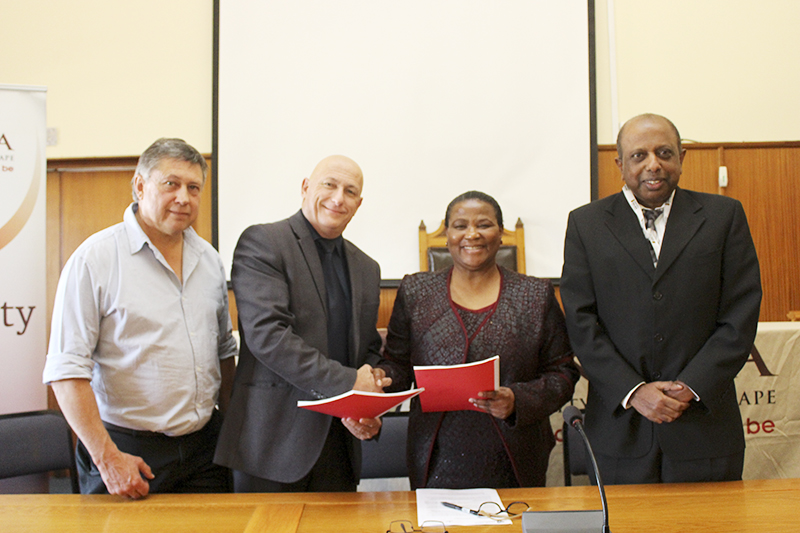 Makana has signed a memorandum of agreement with renewable energy trader PowerX, taking a step that could change South Africa’s energy landscape. The Trade Agreement, known in the Electricity Supply Act as the Use of Systems agreement, will make Makana only the second Eastern Cape municipality to enter the renewable energy trading market in a sustained and systematic way.

“This is a groundbreaking agreement that could change the municipal energy landscape,” Wilken said. “We chose Makana because of the support we get from their officials.”

Wilken said the fact that Mayor Nomhle Gaga had championed the project had also been a key factor in getting it off the ground. Makana Municipality is only the second municipality in the Eastern Cape following the Nelson Mandela Metro to make the supply of renewable energy through the municipal grid a reality.

The signing of the agreement will allow Power X to sell renewable energy to municipal customers through the municipality’s grid. Power X is the only entity besides Eskom that has a trader’s license allowing it to both buy and sell electricity.

Sophisticated SMART Meters will be installed to enable the municipality to measure the amount of renewable energy that comes to Makana’s grid and that will be the profit share amount due to Power X.

Power X will now go out on a tender process to invite prospective Independent Power Producers (IPPs) to generate renewable energy that will be supplied to Power X and which will in turn be sold to municipal customers.

In her statement at the media briefing, Gaga said residents who opt to make use of green energy will not only save money, but will also reduce the use of brown energy (Eskom electricity).

She said about 100 jobs would be directly created from bio-mass to energy. Other benefits included:
• The penalties that the Municipality have to pay to Eskom for exceeding the maximum notified demand will decrease;
• The municipal electricity network will be upgraded at no cost to the municipality;
• Municipal customers will receive discounts where they use green energy;
• Eventually the Municipality will use more green energy than brown energy – which benefits the environment;
• Energy supply will become more stable in terms of fluctuations;
• The Municipality will be able to attract more investment because it can provide green energy that is line with the Sustainable Development Goals and the proposed carbon tax that will be levied on business.

The biggest benefit, said the Mayor, is that the project is implemented at no cost to the municipality.

At the briefing, Power X adviser Derek Batte said with renewable energy being an emerging industry, this was an opportunity to create economic development. Attractive to a business wanting to operate in Makana will be the fact that Power X sells power to the municipality by unit of electiricty (i.e. kilowatt hours) – not at a rate that escalates with demand.

“While there will be an annual increase, this is based on a fixed escalation ratio,” Batte explained. “In other words a business knows what the cost of electricity will be five years ahead and can create their business plan accordingly.”

What research and engagement has been done to ensure this is feasible?
During the 14-month period up to the signing of the Municipal Systems Agreement, a working group was established consisting of officials of various relevant municipal directorates to work with Power X and CDA to compile a distributed analysis report. This was to determine whether the model proposed would be viable or not.

“Based on this report, the Council took the decision to continue with the bidding process to appoint Power X as an additional trader to Eskom, selling electricity to the municipal customers,” Gaga said.

Public consultations were undertaken with external stakeholders prior to embarking on the bid process. South African Low Emissions Development (SALED) ( a non-profit organisation funded by the UN Aid agency with the aim to provide technical assistance to help South Africa transform its economy to support jobs and sustainable growth, while lowering greenhouse gas emissions) were involved to ensure that the process followed was sound and adhered to all required principles.

How long before the project starts?

According to the statement, it is envisaged that towards the end of the year the bidding process by Power X to appoint IPPs will be concluded and that these IPPs will commence with erecting plants to generate renewable energy to be fed into the municipal grid.

Grocott’s Mail quizzed Batte and LED Director Riana Meiring separately addressed councillors about the project. This is a combined summary of their replies.

Who can buy Power X green energy – and will Eskom power still be available?

For now, Power X will be only for those buying from the Makana grid (because this is a partnership with Makana). Makana can buy through the Eskom grid but Makana can’t sell to Eskom customers. Green energy customers can only be on the Grahamstown grid side – i.e. Everything this side of Industrial Area substation.

Who will own the grid?

Eskom might hand over the part of grid they own if Makana maintains it – and clears their Eskom debt. In the long term, Makana could take over the entire residential electricity supply.
The infrastructure will always belong to Makana. Power X doesn’t want to build a new grid for their green energy trading and so this is a partnership with the municipality.

Can our old infrastructure handle something new and different?

The grid codes determine what connections are made at substations and what upgrades are required. It’s up to the generator (IPP) to finance those upgrades i.e. there is no cost to the municipality.

How did Power X get this contract?

This was an unsolicited bid under public participation in terms of the supply chain management process – because it’s a unique product offering.

What if you want to generate and sell power?

If you want to sell power as an Independent Power Producer (IPP) there will be two ways of doing this:

In both cases the revenue from power sales is shared with the municipality. To enter into such an arrangement, an IPP has to go through a regular supply chain management process i.e. Power X will issue an invitation for expressions of interest; the IPPs will submit proposals; through a selection process, the best product offering/s for the municipality will be selected.

What about quality control?

The energy environment is one of the most legislated in the country, as far as the technology is concerned. Any IPP must comply with the national grid codes.