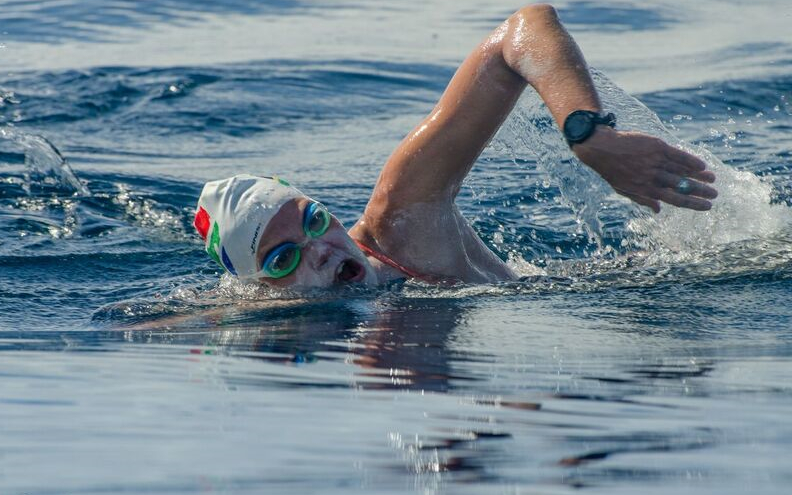 Former South African swimmer Sarah Ferguson has joined hands with SPAR Eastern Cape as an ambassador in their Stop Plastic campaign, recently completing a 100km swim along the Elephant Coast to raise awareness about the dangers of plastic pollution. Photo: Supplied

Former South African international swimmer, Sarah Ferguson, has linked her talent for swimming to a passion for the environment by joining SPAR Eastern Cape as an ambassador in their Stop Plastic campaign.

The long-distance ace was a top pool competitor during the 2000s, swimming for South Africa in a number of World Cups, but is now putting her skills to work for another cause.

In July, she formed a partnership with SPAR Eastern Cape in their campaign to educate the public about the dangers of plastic pollution, combining it with challenging swims around the world.

She recently completed a 100km Elephant Coast swim, which took her from southern Mozambique to northern KwaZulu-Natal over a period of six days.

The association with SPAR EC was sparked by a presentation Ferguson, who lives in Durban North, gave after a 2km swim in Hawaii, in which she became aware of the dangers of plastic to the environment.

“I came to Port Elizabeth for a meeting and they liked what they saw,” she said. “Equally I was keen to work with them to promote their Plastic campaign.”

In April this year, SPAR EC took the bold step of trying to limit the use of plastic in their stores by encouraging consumers to make use of alternative packaging options available at all outlets.

In particular, they are focused on limiting single-use plastic, which includes items such as plastic bags.

At that stage, managing director, Conrad Isaac, said it was time to take a stand and to set an example to others, even if the journey started with one small step.

“Let us start by cleaning up our own backyard. If we are able to maintain the spaces in which we live and work by reducing the plastic content, that is a start.

“And if it helps to clean up the world, well that would be just great.”

That initiative is now beginning to stretch beyond the borders of the Eastern Cape, with ambassadors such as Ferguson joining the fight against plastic pollution.

“SPAR EC are supporting this trip, which is amazing,” said Ferguson.

“Basically we are trying to develop a relationship to work towards creating more sustainable solutions around the use of plastic and doing a lot of work in the schools through education on the issue.”

She added that their plan was to tackle long-distance swims that hadn’t been done before, using the occasion to highlight the issue of plastic pollution and ensuring the swim was challenging enough to make a statement.

“We will produce a documentary series on each stage of the swim and release our findings on how important it is to shop plastic-free, which helps to minimise our impact on the environment.

“Pretty much 80 or 90 percent of the time I come across plastic in the oceans,” said Ferguson.

“Obviously there is a lot more on the beaches, but sometimes in the ocean you can’t tell the difference between a piece of plastic and a jelly fish.”

She praised SPAR EC’s step to do something tangible about the problem.

“It’s a wonderful initiative and to have someone like SPAR EC stepping up to tackle the issue is fantastic,” she said.

“They are the first SPAR region to do so and they have set the benchmark for others to follow.

“This is a global problem – it affects everyone – and we are excited to be partnering with them in trying to combat this very real threat.”