Support flows in for Mayor and her team 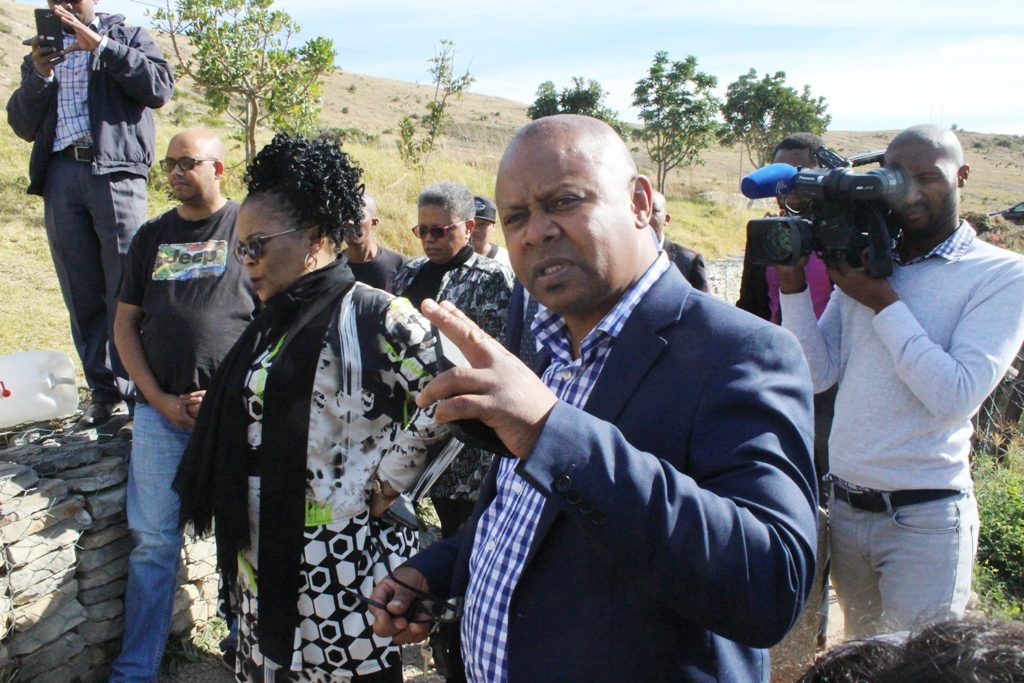 Deputy Minister of Water and Sanitation Pam Tshwete (left) and nationa pportfolio committee chair for Water and Sanitation Mlungisi Johnson led a VIP delegation to Grahamstown (Makhanda) yesterday, interacting with stakeholders and members of the public, as well as visiting the Fairewood spring. Photo: Sue Maclennan

There was good news, confusing news and a surprising idea to deal with Makana’s imminent water supply crisis as a top political mission, along with senior officials from the Department of Water and Sanitation and Amatola Water, descended on Grahamstown (Makhanda) yesterday.

There was a definite twist in the fact that when they arrived to inspect the emThonjeni spring on the Port Alfred road, the person at the front of the queue filling bottles was a member of Makana’s Water and Sanitation staff, in full uniform.

The VIP visit to the spring by Deputy Minister of Water and Sanitation Pam Tshwete and national Water and Sanitation Portfolio Committee chairperson Mlungisi Johnson was sandwiched between a stakeholder engagement session in the City Hall (plus SABC-TV interview) and a public meeting in the new indoor sport centre.

With the Deputy Minister (and later Johnson), Makana councillors sat alongside the province’s Chief Director of Water and Sanitation Portia Makhanya and her senior staff, and staff from Amatola Water.

There was clear support for embattled Mayor Nomhle Gaga, who will in today’s full council meeting need to address a Notice of Motion of No Confidence, and Infrastructure Director Dali Mlenzana, against whom five allegations of misconduct were made last week.

Tshwete visited Makana Municipality on 14 June, days after protesters brought muddy looking water and a bucket of raw sewage to the city hall, in protest against poor water quality. Yesterday’s visit was in fulfilment of her promise, Tshwete said, to return and follow up on whether the problems had been sorted out.

The good news, from the province’s Chief Director of Water and Sanitation Portia Makhanya, is that they have submitted bids to National Treasury for the funding of phases 3 and 4 of the upgrading of the James Kleynhans Water treatment Works. The treatment capacity of the facility is 10 megalitres; the demand is 13ML and upgrades will see it supply the 20ML that planners estimate the municipality will require.

“We are positive, we are hopeful,” Makhanya said. She explained that with the national fiscus under stress, the priority was on multi-year projects that have been started and not completed.

Her department had red-flagged the upgrading of the Belmont and Mayfield waste water treatment works as essential not just for future development, but to cope with existing demand.

“These are projects we have ensured are in our Ministers’ budget,” Makhanya said.

The confusing news concerned water quality and supply in Makana.

The Mayor used her opening address to acknowledge the support of DWS, and emphasise her role in addressing the recent water quality problems. “The notice for people to boil water was from me,” Gaga emphasised. “Even though the acting MM signed it, it was my notice.”

A notice was issued on the Makana Infrastructure Directorate letterhead and signed by acting municipal manager Ted Pillay on 21 May warning members of the public to boil water before drinking it because of high faecal bacterial levels in the supply. The notice followed portfolio committee meetings on 16 and 17 May where it was revealed that Makana’s water was being treated with chlorine tablets in the absence of chlorine gas (Waainek) and because of broken equipment (James Kleynhans). The concerning results of water quality testing from two weeks previously were reported on.

The advice to boil water is still in place.

“The water is 100% clean – it’s just turbid,” Mlenzana said yesterday. “But people should still boil it as a precaution.”

Questioned about water testing, Mlenzana said testing was done at the plants, as well as 31 sampling points in Makana. DWS had helped out with statutory independent testing, he said.

Makana’s new Director of Public Safety and Community Services Kelello Makgoka said testing was being done monthly. He said results for May and June had shown no e.coli in the water. They were awaiting the July report.

Director of Regulation for DWS in the Eastern Cape, Andrew Lucas, said the Department’s monitoring tests showed that water at most sites in Makana had tested safe.

“But there’s still a small e.coli and total coliform count in water from James Kleynhans. So we still support the boil water advisory,” Lucas said.

During the DWS team’s last visit to Grahamstown (Makhanda) Lucas explained that even if the water coming from the treatment works meets the SANS 241 safety standard, it is subsequently compromised by being stored in the reservoirs, which are heavily sedimented.

The nightly throttling and reopening of the supply in the mornings resulted in the sediment being continually unsettled.

At the time, he said chlorination should also be done at the reservoirs; however, high turbidity made chlorination less effective.

Yesterday, he said, “Until those reservoirs are flushed out, the challenge we experienced in May is still there. “Every time, the sediment resuspends.”

He noted that the online Blue Drop system, where anyone can type in the name of their suburb and see the results of the last testing done there, was not updated by Makana.

Regarding the prevention of a recurrence of the problem, Lucas said, “Operation and maintenance of those treatment facilities must be 100%. They need diligent monitoring because they are under pressure. The [James Kleynhans] plant is overloaded. Until we can reduce that load or increase capacity – and it will take a year and a half or longer to complete the four phases – we will still battle.

“We have to ask ourselves, are we reckless to push too much water through the plant? The Water Act says if the infrastructure is insufficient to treat the water, the entity must introduce restrictions. Makana needs to reduce demand to stay within the plant capacity so they don’t  put users at risk.”

Mlenzana caused a stir when he said Day Zero for Grahamstown (Makhanda) could be two months away. This refers to the day when it’s no longer possible to draw water from the two supply dams on the west of Grahamstown. The supply on the east to Glen Melville Dam is from the currently secure Gariep Dam draw-off via the Orange/Fish River tunnel. Mlenzana  again confirmed that should the supply on the west run out, the current 10ML a day from James Kleynhans, already inadequate, would have to be further shared.

Mlenzana said yesterday that  Settlers is at 30% and Howieson’s Poort at 57%.

These are the same figures confirmed by DWS on 29 June. At the time, they confirmed at current useage there were 145 days of water left – with the possible date of Monday 26 November 2018 as the day water-sharing would have to start. With the dam levels identical, it wasn’t clear what had brought the date two months closer.

Mlenzana confirmed the advice to continue boiling water before drinking it as a precaution; however, he also said in an interview later with the SABC, “This is my water – I produce it and I will drink it any time. It is safe to drink. Bring me a big cup of it now and I will drink it.”

An unusual idea proposed by Johnson and supported wholeheartedly by the Deputy Minister, was that emThonjeni – the Fairview Spring – could be the solution to the town’s water problems, and that Government should take over its management.

“This is our land, and this is our water,” Johnson said in the Council Chamber before proposing a visit to the spring by the delegation.

When the group arrived, a member of Makana’s Water and Sanitation staff had reached the front of the queue and was filling bottles.

“This is such a waste of water,” said Tshwete. “Just see how it’s running freely like this.

“This water can feed the whole town,” Johnson said. I think there must be a reservoir here and a long pipe that can take the water to the people. And people can drink this water without it even having to be treated. This water must be made available to our people.”

“Why haven’t you done that?” Tshwete asked DWS officials.

When the officials attempted to explain that the spring had been extensively researched as a possible supply, that while the supply was consistent it wasn’t very much; that formalising the supply would require it to be managed and regulated; and that damming it would affect the entire catchment including those downstream along the Bloukrans River, Johnson said, “You are just trying to distract us from what we need to do. You are showing yourself up for who you really are.”

A community meeting in the Indoor Sport Centre followed. Around 60 community members attended, along with councillors and officials from the first meeting. Several took the microphone to express their concerns about water provision in the township.

There were tense moments when a member of an EFF delegation who arrived late demanded to speak.

After his objections, along with insults to the Minister, Deputy Minister and Mayor became louder and more persistent, four police officers arrived and escorted the delegation out of the venue.

The earlier meeting in the city hall was attended by representatives from Rhodes University’s Infrastructure and Maintenance Department, the Institute for Water Research, Joza and Grahamstown Police, MISA (Cogta’s Municipal Infrastructure Support Agency) and the Grahamstown Residents Association and private individuals.

The Deputy Minister chaired a question and answer section of the meeting, directing questions and commets to the appropriate officials. They ranged from residents’ frustration at the amount of water being wasted through burst pipes, to Makana’s lack of support for the Water Forum they had helped establish, to poor communication about problems.