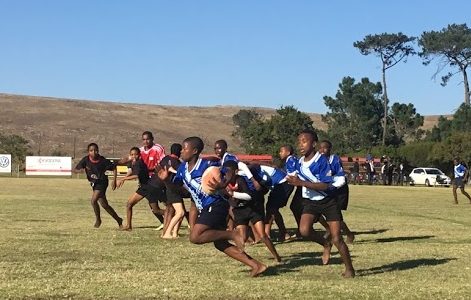 Ntaba Maria's U12 side attack from a scrum in their match against PJ Olivier on Saturday 21 July. Photo: Matthew Jennings

It was a glorious day of sporting action on Saturday 21 July between PJ Olivier and Ntaba Maria who competed in netball and rugby fixtures in the early morning. The girls got the netball action off first, before the boys clashed on the rugby field.

The PJ U10 netball girls took 12-0 loss in what was the opening game of the day, followed by the U11 girls’ narrow 6-4 win. The U12 game was thrilling with much end-to-end action, but many missed opportunities cost the PJ side who showed remarkable resilience and perseverance. Ntaba Maria were remarkable and accurate as they played well as a team to outclass PJ in a surprisingly tight 5-1 win for the visitors. Overjoyed, “We are Ntaba, Ntaba!” was the cry from the thrilled girls.

The U13 teams both had extraordinary opportunities and took them well. Both teams piled on the pressure yet defenses were blinded well together as they protected their 7-7 scores to settle for a draw. The U14 and U15 PJ girls did well against Winterberg, winning all of their games by very close margins. However, the senior teams in the U16 and 1st teams suffered losses in yet another set of hard-fought games.

On the rugby pitch, the game of the day belonged to the U12 boys teams who both played phenomenal rugby. Ntaba Maria found themselves 10-0 ahead after excellent team play to command a good lead throughout most of the game. Seemingly oblivious to the score line, PJ were cool, calm and collected and had fun enjoying every moment. They crossed the try line twice and converted one of the tries to eventually win 12-10. Ntaba Maria were on the PJ try line and very near by, with many penalties after PJ gave away possession cheaply. However, PJ hung on and won a very entertaining and well deserved victory.

The day was filled with good sportsmanship, camaraderie and very good sporting action and all involved had a thoroughly entertaining day; one which all pupils and coaches were proud to be a part of.