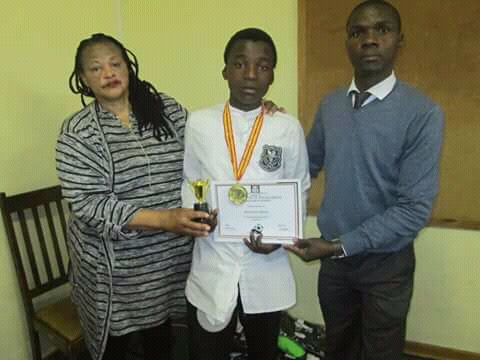 The Eleven Attackers held their annual Players awards ceremony on Sunday 15 July for the under 13 and under 15 teams in a well-attended ceremony.

One of the team’s founder members, Mandla ‘King’ Sokhanyile, was the guest speaker and spoke of the history of the club and its success. Sokhanyile was joined by Pastor Nomakhwezi Madikwa, who encouraged the boys to continue with their sport.

There were many players who received awards but the biggest went went to Sipho ‘Obua’ Rawana, who walked away with the Player of the Season award for his fantastic effort in the under 15 side throughout the season.

Other awards included the under 13 Player of the Year, Onceya Sakhile, Most Dedicated Player, Mihle Onceya, and the Most Improved Player, Othandwayo Havi. Malakhiwe Nikelo won Young Player of the Season, while Sthembele Stephen took home the award for the Most Disciplined Player in the under 13 age group.

Luyolo Matiwane was rewarded for his loyalty by being named the Most Loyal Player. The Players’ Player of the Season was awarded to Iviwe Soyiki, while Luvo Dyani walked away with both Top Goal Scorer and Best Player of the season. Sibulele Madikwa went home with the award for the under 15 Most Disciplined Player.

Luzenathi Majiza was awarded the Player with Leadership Qualities, for his impressive leadership skills throughout the season, while Thabo Ntshebe received a special award for being a loyal and great supporter of football.

The club’s spokesman, Afika Adam, said “these awards are aimed at motivating the young boys and to instill the culture and discipline of the club at a very young age.”

He congratulated all the winners and thanked all those who contributed to the success of the awards. Adam also thanked Vicky Plaatjie for his love of the game and for the amazing things he does to promote youth football.