The other, wild, dagga 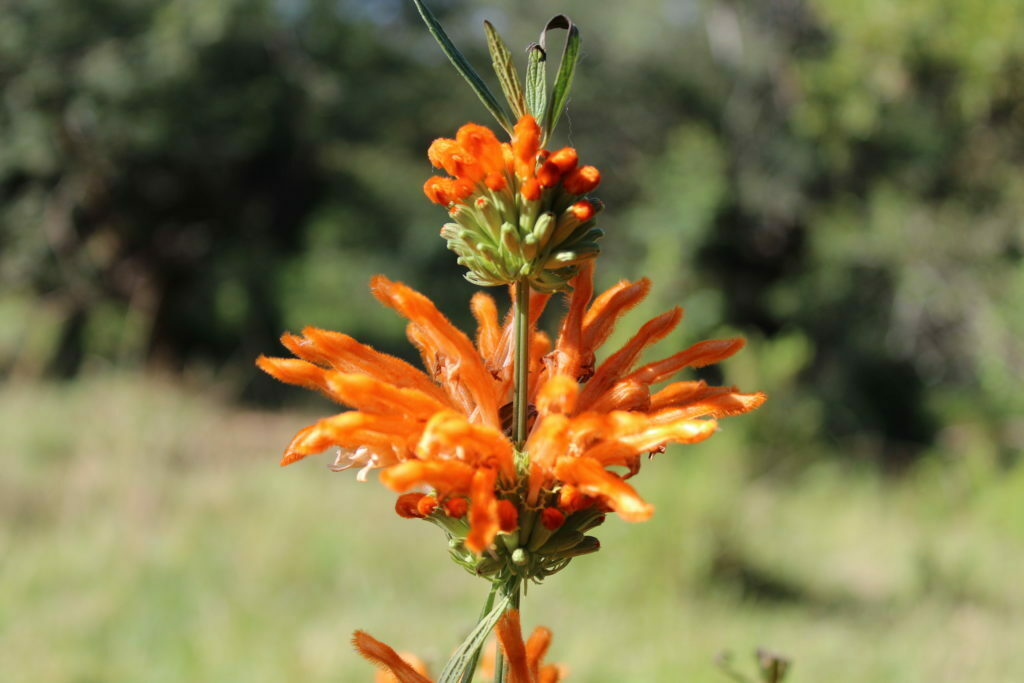 Earliest South Africa plants to be cultivated overseas in 1663 by Jacob Breynius.
Description
Robust shrub up to 2 m in height, with velvety woody stems at base. Flowers tubular, velvety bright orange,
though one might find yellow, cream and even white flowers, 3-11 compact clusters, with the lower curled back;
the calyx toothed, with teeth all +- similar. Leaves narrow, margins toothed in upper half, rough above, velvety
beneath. All parts emit a strong smell.
Conservation status
According to the SANBI (South African National Biodiversity Institute) Red list of South African Plants, Leonotis
leonurus was not selected in any one of four screening processes for highlighting potential taxa of conservation
concern for detailed assessment and was hence given an automated status of Least Concern (L.C.).
http://redlist.sanbi.org
Distribution and habitat
This plant occurs in forest margins, rough grassland and roadside through southern and eastern South Africa
Provincial distribution: Eastern Cape, KwaZulu-Natal, Limpopo, Mpumalanga, and Western Cape.
Derivation of name and historical aspects
The genus name Leonotis means “Lion’s ear” (Greek leon, lion; Otis, ear) and refers to the shape and furry
covering of the tawny coloured flowers, the ends of which resemble minute lion’s ears. Leonurus, taken to be
used as the specific name from another genus in Labiatae means “lion’s tail”, an unfortunate choice for this
species, which, instead of one pompom cluster looking like the brush at the end of lion’s tail, has several such up
its four-square stem! The name Wild dagga has been given to the plant owing to the similarity of its leaves to
real dagga (Cannabis sativa).

Pruning
1. Tall or leggy plants may be cut or pinched back to stimulate strong new growth
2. Cut or pinch stems of lowering or foliage plants just above laves or old leaf joints
3. Thin excess growth so remaining growth will be more vigorous
4. “Deadhead” – remove faded flowers or seedheads to stimulate new flowering growth
5. Remove dead, faded, or diseased foliage as needed
6. Remove some foliage during transplanting to reduce stress on new roots
7. Clean up plants at the end of the season to reduce pest or disease buildup and keep the area neat
8. Avoid putting diseased plant parts in the compost, or risk spreading diseases later

Propagation
From seed
1. Collect seed from mature plants early in the season to avoid seed-borne disease
2. Place seed in labeled envelopes or containers (include the year that seed were collected)
3. Store in a cool, dry place indoors
4. Refrigerate seed if long-term storage is desired

From Cuttings
1. Take leafy cuttings from new growth, a few inches long
2. Strip or prune off bottoms leaves, leaving three or four at the top
3. Insert into moist potting soil
4. Place in bright but indirect light
5. Cover with a plastic “tent” or cut-of soda bottle to retain humidity
6. Keep moist, not wet
Read further about watering and fertilizing the Wild dagga http://www.learn2grow.com/plants/leonotis-
leonurus-care-and-maintenance/