10 Strings and a Box 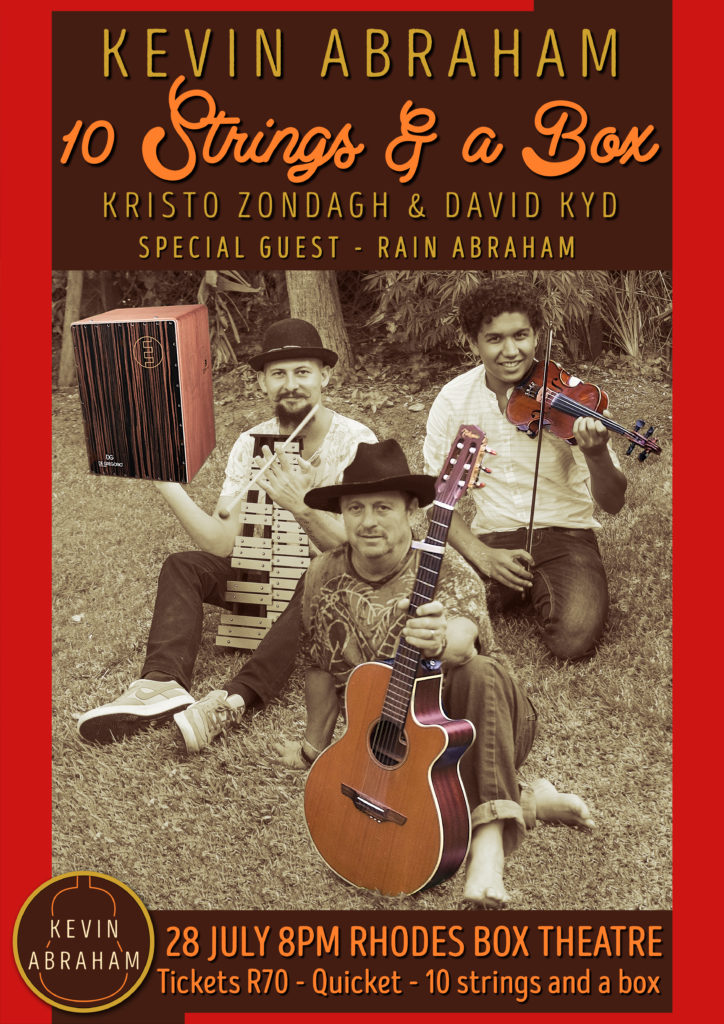 KEVIN ABRAHAM’S “10 STRINGS AND A BOX”

After a sold out 2017 season, with the “Folkify” project in The Eastern Cape, The Garden Route, and Cape Town, [and a full house at Saints in Grahamstown], singer- guitarist Kevin Abraham returns with an updated live show, “10 Strings and a Box”.

Using a collaboration of guitar, violin and percussion, along with fine vocals and engaging story-telling… Kevin delivers a stimulating mix of original songs, plus acoustic interpretations of some great older stuff. Rhodes Honours student, Rain Abraham, will be opening the show with some well-known acoustic favourites.

Kevin Abraham is a respected singer/songwriter with a long history of performance in South Africa and abroad.

Kristo Zondagh is a widely appreciated drummer and percussionist.

He has appeared in countless performances across South Africa. His band, VuDu, recently won the Afrika Young Legends award, landing them a showcase slot at the prestigious Cape Town International Jazz Festival.

He works with a multitude of artists covering a wide spectrum of musical genres.

David Kyd is a young prodigy, classically trained, who is fast being recognized as the serious violinist that he is.

He has shared the stage with some of S.A.’s great players, and is a member of the prestigious South African National String Orchestra. He currently divides his time between teaching and live performance.

Please be aware that this is not a pub gig. It’s a sit down and listen experience designed with a thinking audience in mind.

While the band presents some well-known songs, each one is redesigned and re-imagined so that it takes on a new, acoustic life of its own. The original songs…well, you’ll be able to decide for yourself when you hear them!

Some Comments from Reviewers