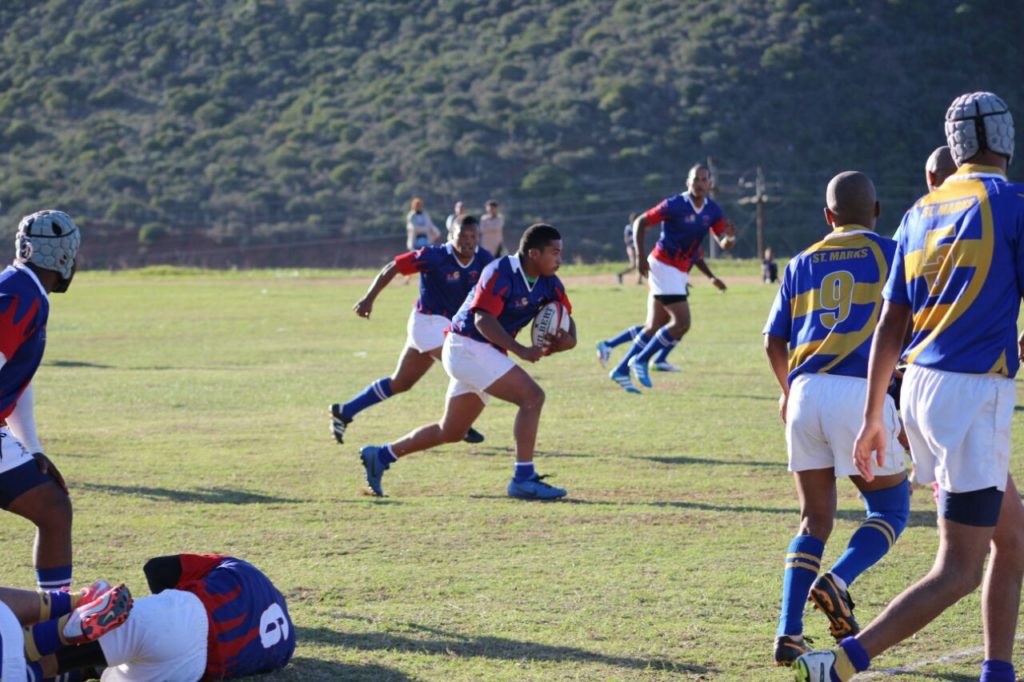 Edwin Saterdag leads the charge for the Rosebuds in their derby win over St Marks. Photo: Supplied

The second round Eastern Province Rugby Union Grand Challenge Shield B encounter between the Rosebuds and St Marks took place in front of a large crowd in Alicedale on Saturday 14 July. Both teams did not disappoint and entertained everyone with some brilliant and exciting running rugby.

The game, as expected, was fast, hard, physical and very intense. Rosebuds played more of a fast and quick game and were running the ball from all corners. Rosebuds’ young and exciting back line were more effective with ball in hand and caused major headaches on attack. St Marks’ powerful and dominant forwards, who usually dominate matters, were quiet and were kept at bay by the Rosebuds pack.

St Marks won the first round Derby 28-10 earlier in the season, but a courageous comeback from the Buds saw them equal matters. Lance Louw slotted an early drop goal for Rosebuds, while Charl Barthers countered with a try for St Marks 5-3. Louw slotted two more penalties while Etienne Blou of St Marks replied with one himself to take the scores to 9-8 at break in favour of Rosebuds.

An exciting second half awaited for the crowd as both teams searched for scoring opportunities. Winger Gwenton Cedras of Rosebuds scored in the left hand corner after some brilliant back line play early in the second half. Minutes later, Blou slotted a penalty to narrow matters 14-11.

Late in the second half, Cameron Jewell of St Marks bulldozed his way through four defenders to score, allowing the St Marks side to go out to a 14-16 lead. In the dying moments of the game, a late charge by replacement winger of St Marks led to a penalty. Edwin Saturday lined the ball 40m from the left hand corner and neatly strucked the ball high between the uprights. the last minute play resulted in the Rosebuds taking home a 17-16 victory at the end of a typically intense derby.

Previous ArticleDeworm the pets please!
Next Article ‘He says his name is Nelson…’