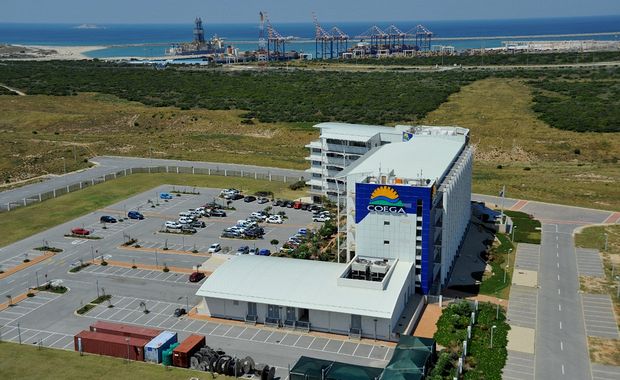 Having established itself as leader in the socio-economic development of the Eastern Cape, whilst making the province an attractive investment destination, it’s no surprise that Coega SEZ is fast becoming a hub for the automotive industry. The Coega SEZ, located in the Nelson Mandela Bay, Eastern Cape, is home to the automotive sector, including companies such as– FAW, BAIC, ISUZU Parts Distribution Centre, Faurecia, Rehau, Groupo Antolin,Benteler, Hella and Q-Plas valued at over R12 billion located at the Coega SEZ and Nelson Mandela Bay Logistics Park opposite Volkswagen (VW) in Uitenhage.

The FAW plant which officially opened in July 2014  put the SEZ on the map and no sooner had they rolled out their first vehicle, [they]were swiftly followed by their Chinese counterparts BAIC in 2016.  Earlier this year, Japanese vehicle manufacturer Isuzu took over the vehicle parts centre, previously operated by General Motors, thus making the SEZ a pioneer in not only boosting the automotive industry but in the creation of jobs proving as well that Coega is the most successful SEZ in the country.

FAW, now in its fourth (4th) year at the SEZ has made giant strides since its official inauguration. The plant, located in Zone 2, has reached milestone after milestone and continues to grow in stature. In 2016, a mere two years since opening, the plant rolled out its 2 000th locally built trucks in August of that year and exceeded the 200 unit mark in exports into African countries. In 2017, FAW continued to exceed expectations by rolling out its 3 000th locally built trucks and sold over 1 200 units (inclusive of exports) that year alone. FAW also expanded its production by building their new 33.420FT truck tractors and increased its production to include almost all FAW commercial vehicles sold locally and in Southern Africa. FAW’s efforts were rewarded as they were named as Global Distributor of the Year 2017 and are currently South Africa’s second biggest truck exporter having raved up their export numbers to two hundred and twelve (212) units.

Following the successes of FAW, fellow Chinese vehicle manufacturer BAIC also announced their investment at Coega in 2016, in an historic investment to the value of R11 billion. The vehicle manufacturing plant, in Zone 1, will produce passenger vehicles including their recently launched X25 Compact SUV which will be built once the plant is up and running. The SUV, available in two grades; Comfort and Fashion; will have four and five speed automatic transmission. BAIC’s massive investment also opened more job creation opportunities with an expected 2400 jobs once the plant is at full capacity and currently has created over 1243 construction jobs.

Marketing, Brand and Communications Unit Head, Dr. Ayanda Vilakazi commended the brilliant work the SEZ has put into being a leader in automotive investments.  “We are ecstatic with the giant strides the SEZ is making in the automotive industry. The multiple investments made throughout including BAIC show the SEZ’s commitment to not only creating jobs but to the development of the Eastern Cape. We can now see that the CDC is on the right track with its mandate and we hope that in future, other vehicle manufacturers can see the Eastern Cape as the future home of their international manufacturing plants”, he said.