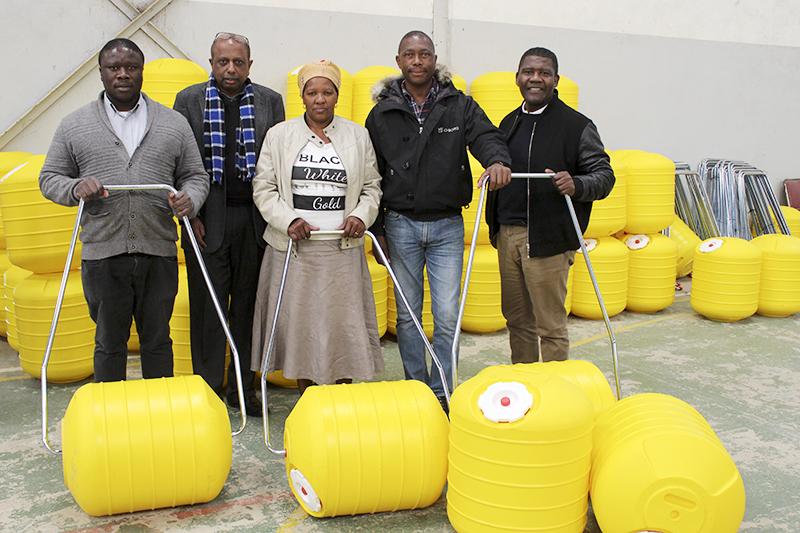 Santam, South Africa’s largest general insurer, recently came to the aid of drought-stricken Makana Municipality, with the donation of 100 eco-roller water drums. The drums can store 75 litres of water and will help community members who need to transport water over long distances on foot.

Makana Municipality is at the centre of a severe drought that continues to affect parts of the Eastern Cape. According to reports the municipality has 125 days or less of useable water to go until Day Zero. Although recent rains have brought some relief to the drought-stricken Eastern Cape municipality, the region remains in dire straits. At the beginning of the year, dam levels were reported to be at 19%. It is expected that the National Arts Festival which ended on 8 July put further strain on the Municipality’s water resources.

John Lomberg, Santam’s Head of Stakeholder Relations, said the donation was part of Santam’s  long-standing relationship with the Sarah Baartman District Municipality in the P4RR (Partnership for Risk and Resilience) programme. Makana falls under the Sarah Baartman District municipality. In an area where most people have a limited potable water supply nearby, mechanisms that make collection easier are imperative. Lomberg added that Santam aimed to continue to use its P4RR initiative to make a significant contribution to reduce risk in vulnerable communities.

“Our P4RRinitiative involves the proactive collaboration with vulnerable municipalities to build their resilience.  Makana is one of 53 municipalities we partner with, and previous efforts in the area have included training fire-fighters and donating R400 000 of fire-fighting resources to improve disaster management capacity. With disasters like the drought still devastating municipalities, we need to pull together to assist those most dramatically impacted by it,” he said.

The P4RR was started in 2012 and helps vulnerable municipalities mitigate against risk from fire, floods, drought and storm surge hazards. It does this by empowering municipalities through resources and disaster management training.

While the hippo rollers had been delivered during a severe threat to Makana’s water supply, Lomberg emphasised that Santam were not “disaster tourists”.

“This is a long-term partnership,” Lomberg told Grocott’s Mail. “Our relationship with the Sarah Baartman District Municipality has been running for three years now. Our aim is to be working with 53 municipalities by the end of 2020, in the Partnership for Risk Reduction and Resilience programme.”

“Water management is one of the basic services we’re trying to address in Makana. The distribution of eco-rollers to some of our most vulnerable citizens will go a long way to helping to ensure they have sufficient water every day. The rolling functionality makes water collection much easier,” he said.