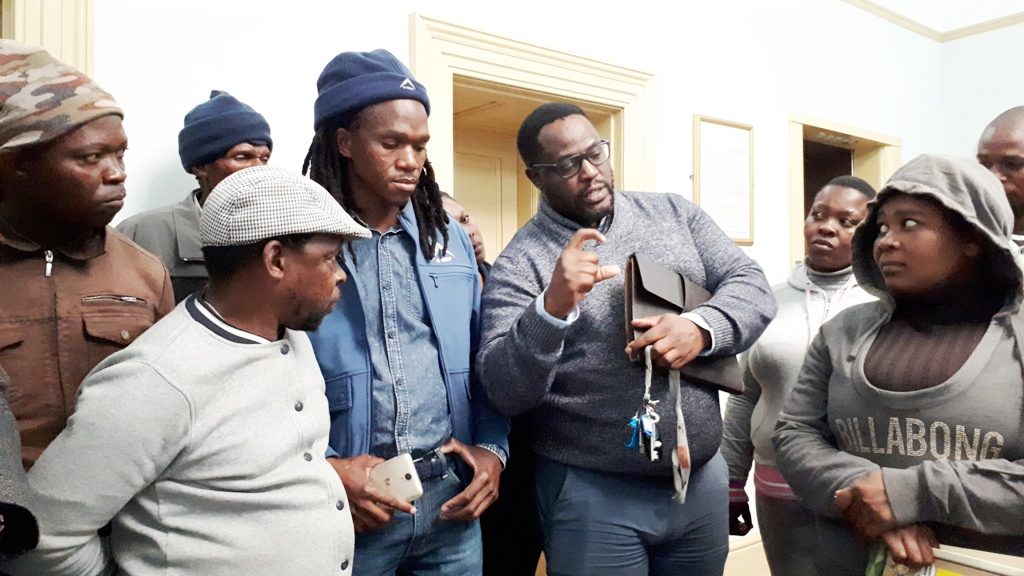 “I will be at Makana for the next 30 years. I will retire here,” was his assurance when Grocott’s Mail asked him last week about reports that he might be planning to leave the municipality. “I am at work – I’m speaking to you from my office now.”

Since then, it’s been confirmed that Mlenzana was given a week to respond to allegations of misconduct. Mlenzana’s continued presence at the infrastructure directorate was on Friday confirmed by portfolio committee chair Mabhuti Matyumza, who said, “He’s in the office and you will see him working.”

Five allegations of misconduct are contained in a document seen by Grocott’s Mail. Four relate to alleged supply chain management irregularities, some of which were initially flagged in a special council meeting on 30 May. A fifth concerns an alleged unauthorised salary increase for a senior Makana official. Two of the alleged incidents occurred during periods when Mlenzana was acting municipal manager.

“He has been given seven days to respond to Council regarding the allegations,” Matyumza said. Mlenzana was required to provide reasons why he should not be suspended. He was not certain when the seven-day period started and expired.

“The principle of natural justice applies. There is no automatic suspension,” Matyumza said.

Acting municipal manager Ted Pillay last week would not confirm that a process was under way to initiate an investigation into alleged misconduct by Mlenzana. This week, he again declined to confirm the process.

“This is a confidential matter and I cannot comment on it,” Pillay told Grocott’s Mail on Thursday 12 July.

Meanwhile, water and sanitation manager Ntombi Tshicilela is confident that Makana’s water supply and infrastructure problems are on the way to being resolved. Her resignation is unconnected with recent events, including the recent water quality crisis, she assured Grocott’s Mail on Friday 6 July. This has been confirmed by both Mlenzana and acting municipal manger Ted Pillay.

Tshicilela said she’d received a good offer in the OR Tambo municipality, in Mthatha, closer to her family home.

She wasn’t happy that she was leaving at a time when Makana still faces considerable hurdles before getting its water supply right and these difficulties were not the reason she is leaving.

“I am used to these challenges,” she said. “And I would have preferred to have left when we’d got things sorted.”

Technical capacity in Makana Municipality is a concern and while she works her notice month, Tshicilela is preparing a business plan for MISA – the Municipal Infrastructure Support Agency. The Section 7 agency accounts to the Minister for Co-operative Governance and Traditional Affairs . Its mandate is to support municipalities in planning, implementing, operating, maintaining and managing municipal infrastructure.

Speaking to Grocott’s Mail on Thursday 5 July about how Tshicilela’s resignation would affect operations, Mlenzana said a technician who formerly reported to her would be acting water and sanitation manager until a water engineer was appointed.

“MISA has been approached,” Mlenzana said. He said he would meanwhile take on 40% of Tshicilela’s responsibilities, specifically the administrative side of her work, while the technician would look after operational issues.