‘Festival is here to stay’ 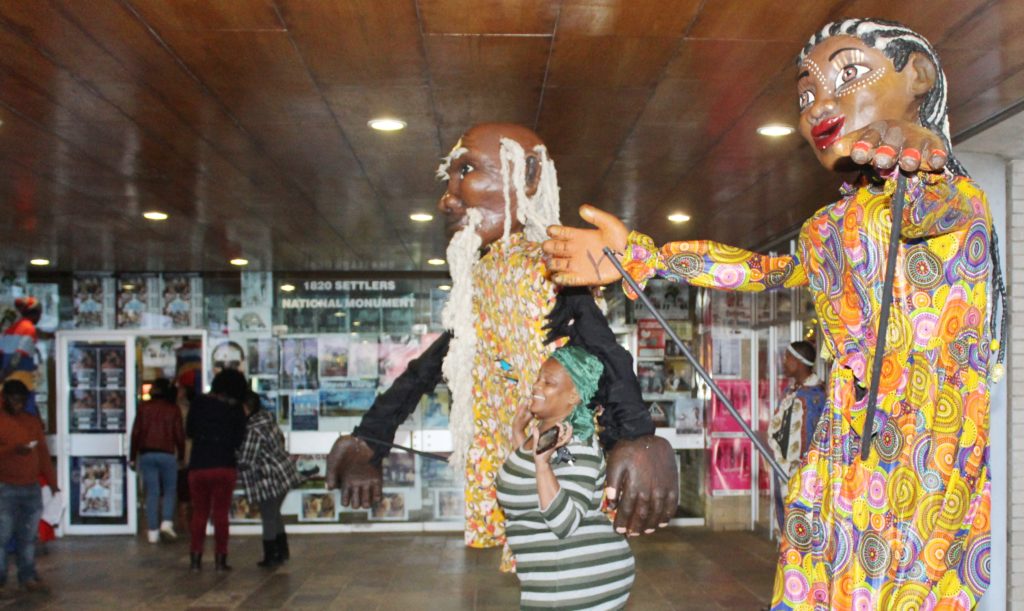 Blue-light-announced meetings of government officials and politicians in the city centre early Wednesday 27 June were followed by a media briefing and reception hosted by Makana Mayor Nomhle Gaga in the afternoon. Later, 31 taxis commissioned by the municipality took residents from all over the city to a colourful sunset opening event at the Monument. Thursday morning saw the police band accompany the raising of the flag there, with Grahamstown Cluster Commander David Kanuka and MEC for Arts and Culture Bulelwa Tunyisa at attention for the sunrise session.

At the City Hall briefing, Festival CEO Tony Lankester was determined to put to rest rumours that the Festival had plans to relocate.

“This is our home for 365 days of the year,” Lankester said. Thanking residents and businesspeople in partnership with Makana for funding and carrying out repairs and maintenance to roads and infrastructure in the past few weeks, he said, “I’m very proud of the city for stepping up in the way they have.”

The Festival was in Grahamstown to stay, Lankester said.

Hinting at media coverage of the city’s infrastructural and financial problems, he said, “This is not a festival of potholes – it’s a festival about the arts.”

He highlighted the new location for the Village Green at Victoria Girls’ High School as being one of the 2018 Festival’s innovation highlights.

“It’s beautifully set up, and it’s much closer to the heart and soul of the city,” Lankester said.

The Creative Digital Arts Festival brought the Festival “closer to the 22nd century,” he said.

And the new Backyard Theatre initiative, where performances were taking place in unconventional outdoor spaces, took performance into the heart of the township.

On Grahamstown’s much publicised water, electricity and infrastructure problems, Lankester said, “We can’t guarantee that there won’t be a problem with water, or that the lights won’t go out,” Lankester said. “But that’s the case with any city in South Africa. What we do have is emergency plans and measures in place to keep Festival visitors safe, through a JOC.”

The MEC spoke about the Creative City – a year-round project that had given rise to several initiatives including the funding of an arts teacher post at Ntsika High School, thhe annual massed choir event, Masicule, Cinema under the Stars, training and development of young technicians, sound engineers, heritage assistants and launching the Festival Gallery for local artists to showcase their work.

She also spoke about the partnership between civic organisations Makana Revive, the Grahamstown Business Forum and the Grahamstown Residents Association with Makana Municipality and provincial government (the Department of Sport, Recreation Arts and Culture, Co-operative Governance, Treasury and the Office of the Premier) to ensure Grahamstown was ready for the influx of visitors.

Work had included emergency measures to secure the supply and treatment of water, rehabilitating Grahamstown roads and fixing up verges and islands.

Tunyiswa also ran through the economics of the Festival – among the reasons it continued to enjoy government support. Key figures as per a 2016 study by Rhodes University’s Department of Economics were that the Festival contributes an estimated R377 million to the Eastern Cape’s economy and R94m to the GDP of Grahamstown through direct and indirect spend, job creation and tourism activity.

She highlighted the study’s findings that more than 80% of respondents believed the Festival was core to the city’s identity and 84% believed it had increased their understanding of other cultures.

The theme of the Festival’s social role was carried, too, by Elinor Sisulu, deputy chair of the Festival Board, who spoke at the opening ceremony at the Monument later on.

“The Festival has played an important role in social cohesion, and forming a common identity for this town,” she told a packed Monument Theatre. “But after the lights go out at the end of Festival and the curtains are rolled up, this is still our home and we pledge to maintain the creative momentum of which the Festival is one part.”

Speaking after her, Premier Phumulo Masualle and Sarah Baartman District Mayor Eunice Kekana both gave the unequivocal message that “The Festival will stay.”

A warning, not a prayer