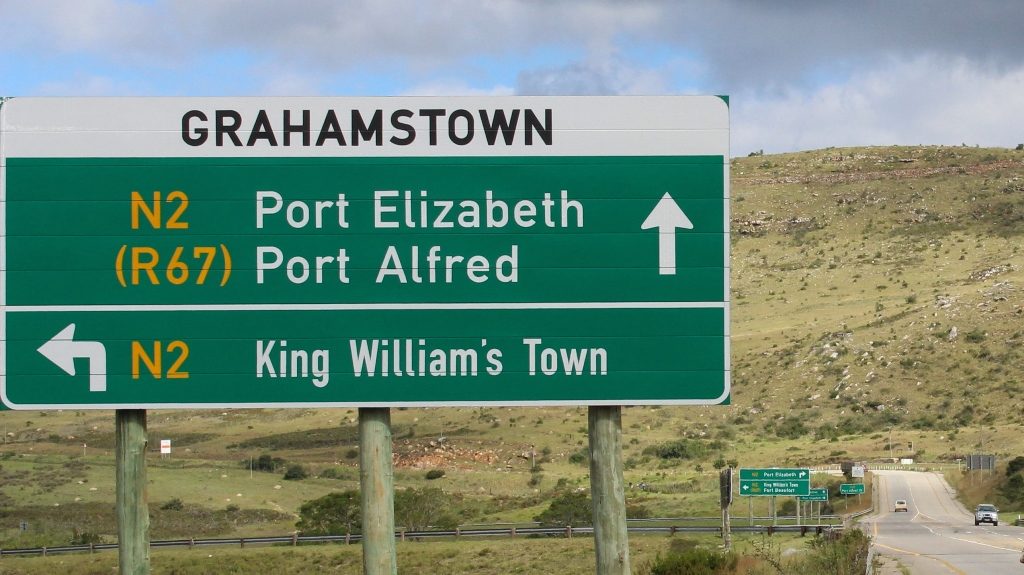 The roadsign on the R67 outside Grahamstown. The city's name has been gazetted to be changed to Makhanda. Photo: Sue Maclennan

Nowhere in South Africa has the process to change the name of a place been as intensive as in Grahamstown. That’s what South African Geographical Names Council Chairperson Johnny Mohlala told Grocott’s Mail after the change from Grahamstown to Makhanda was officially gazetted yesterday. Anti-name change campaigner Jock McConnachie has issued a strong statement, saying the decision is unconstitutional and that Keep Grahamstown Grahamstown will be presenting objections to the Minister within the 30-day period allowed.

Arts and Culture Minister Nathi Mthethwa has approved the change of Grahamstown’s name to Makhanda. This was announced in the Government Gazette Friday 29 June. The notice refers to the Geographical Names Council Act (188/1998) and records: “I, Nathi Mthethwa, Minister of Arts and Culture officially approved the following geographical names: Makhanda (change of name from Grahamstown).”

Mohlala assured Grocott’s Mail that the timing of the gazetting at the start of the National Arts Festival was entirely coincidental and emphasised that people’s dignity and the forging of a national identity were at the heart of the name-change impetus.

He presided at an emotionally charged consultative meeting [Grocott’s Mail] at the Albany Museum earlier this year. Several residents, representing interest groups, spoke there and hearing arguments were members of the SAGNC from across the country. The Council is made up of 15-25 members and Mohlala said about 12 were present at the 15 February meeting.

Mohlala interacts with Mthethwa as a member of the Ministerial Task Team for Transformation of the Heritage Landscape. Most recently, the Task Team announced [News24] that four of South Africa’s airports would be undergoing name changes as part of its programme. A day after the February meeting in Grahamstown, Mohlala vowed to speak in his personal capacity to the Minister [Grocott’s Mail] to make a decision.

Colonel John Graham, after whom Grahamstown is named, commanded the forces of the British colonial project in the Eastern Cape that included a series of military campaigns to subjugate the amaXhosa. His stated mission to instil “a proper degree of terror” among the amaXhosa, as recorded in Ben Maclennan’s book of that name, was cited by Mthethwa [Citizen] as among the evidence of the extreme brutality of the British colonial regime. Makhanda was a Xhosa prophet who inspired a battle of resistance at Egazini, at the city’s south-western edge, in 1819.

In a statement (full statement below), McConnachie said the Keep Grahamstown Grahamstown campaign represented the opinions of more than 6000 objectors.

“The recommendation by the ECPGNC and SAGNC and the Minister’s decision to gazette the name change completely ignore public opinion on the issue and both the Minister’s statement and the government notice itself fail to mention that in terms of the relevant legislation, persons have 30 days to object to the proposed name change. As such the notice is fatally defective and is of no force or effect,” McConnachie said.

He said the provincial and national geographical names councils had ignored the decision of the Supreme Court of Appeal on the issue of the renaming of Louis Trichardt to Makado – “which clearly defined what constitutes a proper consultation process”.

“The manner in which the latest ‘process’ was conducted by the ECPGNC and the SAGNC does not merely meet the requirements as set down the Supreme Court of Appeal and is unlawful,” McConnachie said.

On the motivation for the change, he said the decision was in conflict with the Constitution, and indicated “a spirit of retribution rather than reconciliation”.

Grocott’s Mail asked Mohlala if he was relieved that the Grahamstown/ Makhanda change had reached the gazetting stage, given the resistance.

“No. I was not under stress in this process,” he told Grocott’s Mail. “I was just doing what the Act expected me to do.”

But he did say that the process to change Grahamstown’s name had been unique in one respect.

“Among all the applications for change, no name name change process has been as intensive as the one for Grahamstown,” Mohlala said.

After the Grahamstown meeting, he said, the SAGNC members had decided to bring out every document available. “I held the meeting back for an hour to make sure people go through the documents again to make sure they make an informed decision. From where we are now, I have no doubt that all corners of the application, including objections, have been acknowledged. We came to the conclusion that the name must change.”

Mohlala acknowledged the strong feelings South Africans have about place names. “The town’s rich history is one that will remain there in places available to students of history and researchers – museums and libraries,” he said. “The whole process of naming and renaming is very emotive. It’s not something we undertake lightly. It’s not just about the name. It’s changing people’s mindset, the paradigm.

“Coming out of our [apartheid]history, part of the transition towards social cohesion requires there must be some form of reparation,” Mohlala told Grocott’s Mail. “The TRC decided one route to restore the dignity of the people of South Africa is through name changing. It’s a contribution towards the transformation of the South African heritage landscape.”

Mohlala also referred to Outcome 14 of the National Development Plan.
“This refers to social cohesion and nation-building – one way of trying to ensure we build a national society.
“You meet a German, if you ask them where they’re from they’ll tell you they’re German. If a South African is overseas and someone asks them about themselves, they’ll say they’re ‘Zulu’ or ‘Xhosa’ etc.

“We must forge ahead with building one nation with a common attachment to one sovereign state and its symbols. At some stage, we should be able to decide on one national language.”

Asked about the timing of the gazetting of Mthethwa’s approval, at the start of the National Arts Festival, Mohlala said this was coincidental. “When he signed it, I don’t think the Minister was even thinking of Festival.”

He said the Festival itself was a good example of how it was possible to adapt to a new name.

“The Festival’s name doesn’t even have Grahamstown in it,” he said. Furthermore, the name had been adjusted to accommodate successive sponsors. “If the Festival moves from the town it won’t be because of the name change,” Mohlala said.

Speakers at the various opening events for the National Arts Festival this week, including Festival CEO Tony Lankester and Eastern Cape Premier Phumulo Masualle, were at pains to emphasise that the Festival would remain in the city.

Keep Grahamstown Grahamstown (KGG) notes with dismay the decision of the Minister of Arts & Culture, Mr Nathi Mthethwa, to Gazette the name change of Grahamstown to Makhanda.

The Minister’s statement announcing the decision is riddled with factual errors as regards the process which led the South African Geographic Names Council (SAGNC) to recommend the name change to the Minister, but the notice is itself fatally defective.

It was also not a proper process in that it comprised a single meeting in a single venue attended by fewer than 100 persons representing one small section of the community.

The statement also refers to “public engagements” conducted by the local municipality since 2012.  In fact three thorough public consultation processes were conducted by the Makana local authority between 2007 and 2012 and the outcome of each such process was conclusively not in favour of changing the name of Grahamstown.

This led the ECPGNC, in pursuit of its mission to change all colonial names throughout the Eastern Cape, to take matters into its own hands by conducting its own fast-track “process” from late 2015.

In doing so the ECPGNC acted completely independently of the local municipality contrary to what is claimed in the statement.

By so doing, the ECPGNC and the SAGNC ignored the decision of the Supreme Court of Appeal on the issue of the renaming of Louis Trichardt to Makado which clearly defined what constitutes a proper consultation process.

The manner in which the latest “process” was conducted by the ECPGNC and the SAGNC does not merely meet the requirements as set down the Supreme Court of Appeal and is unlawful.

The recommendation by the ECPGNC and SAGNC and the Minister’s decision to gazette the name change completely ignore public opinion on the issue and both the Minister’s statement and the government notice itself fail to mention that in terms of the relevant legislation, persons have 30 days to object to the proposed name change.  As such the notice is fatally defective and is of no force or effect.

Those who are not in favour of the name change are nevertheless urged to address their objections to the Minister of Arts & Culture within the 30 day period.  KGG will itself be doing so on behalf of the more than 6000 objectors whose opinions it represents.

Subject to the Minister’s final decision, a legal challenge will also be launched.