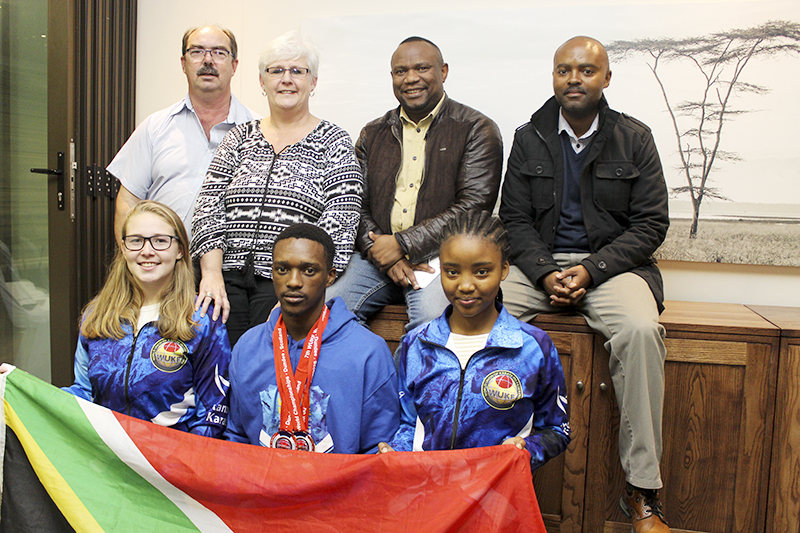 Even more proud to be South African – that was the verdict of three Grahamstown karatekas who returned last week from the 7th WUKF World Karate Championships in Dundee, Scotland. The Graham Hotel on Wednesday night, 20 June, hosted a welcome-home celebration for them and their families.

The United Shotokan-Ryu (USR) team members competed under the banner of the South African National Shotokan Association (SANSA) at the prestigious Championship. More than 2200 karateka representing 40 countries contested this year’s event which was held over four days.

“It was a great experience fighting in the Worlds,” Singata told Grocott’s Mail. “Mostly because of the different cultures – and that makes the karate different.

“You realise that while for us, karate is a way of life, for some it is just a sport,” Kayle added.

“You can see who practices karate’s true values – self discipline, respect and integrity,” Singata said. “You can do karate, but at the end of the day you are all friends.

“Some didn’t want to bow or shake hands,” Kayle said.

“In good karate, you give someone a hug afterwards, thank them for the fight. That’s how friendships start,” Singata explained.

What made them proud of being a South African?

“Lots of things!” said Nosithembiso. “Some of those coaches were very pushy and they would demand to get a point. As South Africans, we have discipline in our dojo, and core values. You come to the dojo and you may not be friends, but you put your differences aside: You realise it’s not just about you.”

Most refreshing for all three karatekas, they said, was that there was no hint of different treatment on the basis of one’s race or gender. “There was no favouritism,” Kayle and Nosi said. “It was completely fair.”

Singata said it had been an incredible growth experience for him.

Singata advanced to the finals (final four competitors) in both the Junior (18-20yrs) and Senior Men’s (21-35yrs) under 65kg Kumite Categories. In his final matches, he lost both by narrow margins, bringing home two bronze medals. According to United Shotokan-Ryu Chairperson, Gary Grapentin, Singata is the only South African to ever contest three finals at a single WUKF World Championship. In addition, Grapentin believes that he is also the first South African to ever medal in a senior men’s kumite category at the WUKF World Championship.

The welcoming event was opened by Army chaplain, Reverend Nkosinathi Ngesi, who made sure they understood the value of the opportunity they’d been given. “Your parents use taxis,” he told the youngsters. “You went in a plane.”

He reminded them how proud the community was of them. “It doesn’t matter if you won or lost,” he said. “You stood and you fought.”