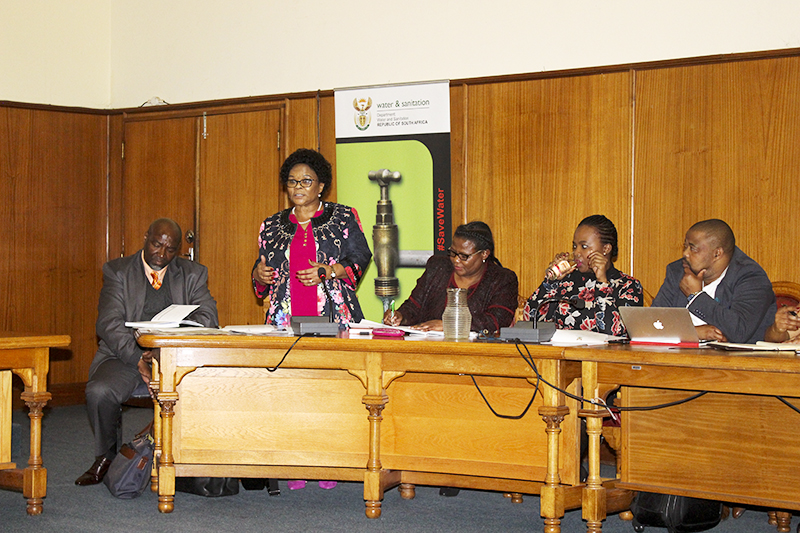 Makana was warned six months ago of the water problems the municipality has had to urgently address in the past few weeks. This emerged in a briefing for Deputy Water and Sanitation Minister Pam Tshwete and officials from DWS and Amatola Water in the Makana Council Chamber Thursday . The briefing was delayed more than an hour as some councillors remained locked outside the main gates of the city hall, along with a group of protesters from the Unemployed People’s Movement.

Tshwete described the visit as a monitoring exercise. “Our role is to ensure bulk water supply. Reticulation is the municipality’s job,” Tshwete said in a media briefing following her discussions with councillors and officials. She quickly rattled off the amounts Makana had received:
2014 – R2 million
2015 – R10m
2016 – R38.4m
2017 – R50m
“The only time we withhold the funds is when there is conflict among the parties involved, or where there is instability.”

During Council portfolio committee meetings on 16 and 17 May, it was revealed that the correct treatment chemicals at Makana’s water works had run out and that swimming pool chlorine tablets were instead being used. Also in that meeting, the results of water quality testing from two weeks previously were reported on. They showed THAT unacceptably high levels of faecal bacteria presented a health risk. On 21 May, acting municipal manager Ted Pillay issued a notice advising residents to boil water before drinking it.

Before yesterday’s briefing, Mlenzana told Grocott’s Mail that the advisory remains in force. It was confirmed by Director of Regulations for DWS in the Eastern Cape, Andrew Lucas, who said DWS had done monitoring at 12 sites in the Makana area during the past two weeks.

“In most places the samples tested clean,” Lucas said. “But at a few there was were e.coli levels of up to 4. Because the standard for e.coli is zero, this confirms that Makana must retain its advisory to residents to boil water before drinking it.”

Lucas said, however, that the risk was not severe, except for the vulnerable. “E.coli is particularly dangerous to infants,” Lucas said.

Lucas also spoke about the quality of water to east Grahamstown.

Lucas said the technology at James Kleynhans was designed to use and treat it. “But if it’s overloaded, it is compromised in its ability.”

The problems were with how the the equipment was operated and maintained.

“The works were designed to use that water,” Lucas said. “But have we got the right skills?”

“Many of the problems we see now, we saw 6-8 months ago and raised them,” Lucas said. “If some of those challenges had been corrected last year, we would not be sitting in this state.”

Lucas was asked explicitly by the Mayor to explain the use of chlorine tablets in the water – which many believed was inadequate, and that using the tablets instead of liquid chlorine had caused the high e.coli in the water. Lucas explained:

Acting municipal manager and Mlenzana explained during both briefings the reason for the sludge:
The contractor doing the upgrade at James Kleynhans (the contractor has since been fired for poor performance) demolished the sludge beds. Not only were there delays from the contractor, but then they were removed from site. This led to a massive sludge build-up in the settling ponds.

Because the sludge contains treatment chemicals, it required environmental testing and dumping at an approved site. This had now been achieved, Pillay confirmed; however, it would take a further two weeks before the settling ponds were completely cleaned out.