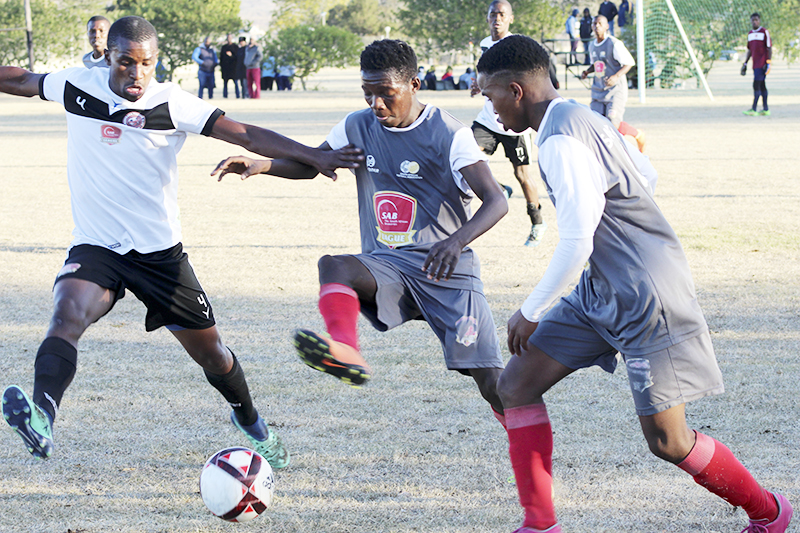 Manchester players from Alexandria put pressure on an Amavarara player. Amavarara finished second in the weekend tournament and gained promotion, while Manchester languished at the bottom – despite a spirited fight on Saturday that saw them achieve a one-all draw with the Queenstown side. Photo: Sue Maclennan

It was a very good weekend for local football fans who arrived in numbers at the Six South African Infantry military base to watch the SAB league provincial play-offs. All Eastern Cape SAB Regional winners were in town fighting for the top two spots to gain promotion to the ABC Motsepe league.

Manchester from Alexandria represented the Sarah Bartmaan region and came up against very tough opposition throughout the weekend. On Saturday 16 June, they came up against Amavarara from Queenstown in a highly anticipated clash. Amavarara started like a house on fire, taking the game to their opponents who took very long to get into their groove. Manchester had to do a lot of chasing and defending, conceding a goal midway through the first half, which was the only goal.

Manchester came back from the break a completely changed side as they quickly found their rhythm. They attacked their opponents furiously, creating a number of chances, but failed to use them effectively. They eventually found an equaliser with just fifteen minutes left in the game. They continued to apply massive pressure inside the Amavarara half, however failed to score before the final whistle, leaving the score a one-all draw.

On Sunday 17 June, Manchester had to win to keep their hopes up as they faced Happy Movers from Umthatha. They dominated the game from the first until the last minute but had nothing to show for it. Once again poor finishing let them down, as the game ended in a goalless draw.

The third game against Madibaz from Port Elizabeth was a must win for the Sarah Baartman team. The pressure got too much for them as they started making too many mistakes and were punished in the process. Everything started falling apart and Manchester ended the game on the losing side of a 4-1 scoreline.

Manchester coach, Bongani Babana, said after the game, “we started this tournament well and it was a good experience for us, but lack of scoring cost us. The first two games drained our boys and you could see that in third game they ran out of gas, but we will take all the lessons learnt here and use them to our advantage in the new season. We would like to thank everyone who came here to support us,” said Babana.

Birmingham, from East London, and Amavarara from Queenstown clinched the top two spots with 9 and 7 points respectively and both finished unbeaten and gained promotion to the ABC Motsepe league next season.