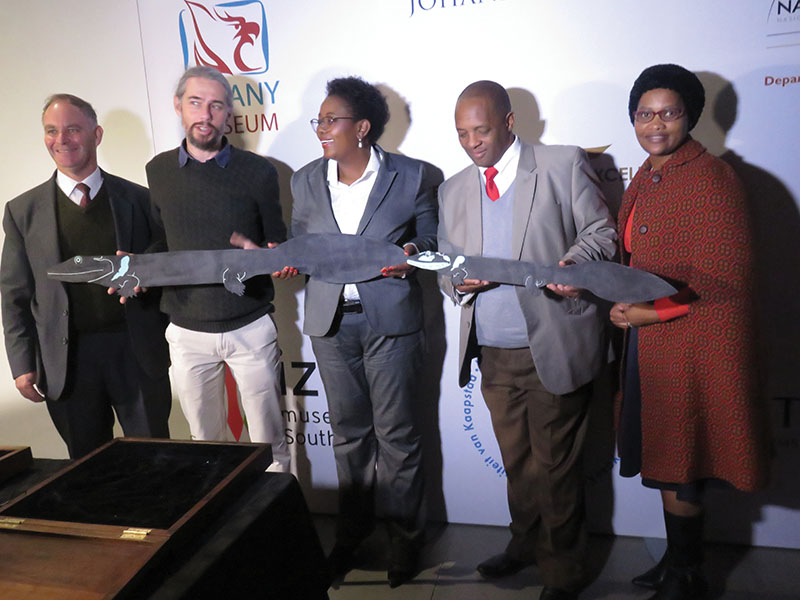 On Friday, 8 June the Albany Museum manager and I travelled to Johannesburg as special guests. The DSTF-NRF Centre of Excellence in Palaeosciences at Wits University had organised a media conference featuring the groundbreaking new fossil discoveries. This was about tetrapods, the four-legged creatures that lived on earth 360 million years ago. The scientist of the moment was one of our own, Dr Robert Gess who seemed thrilled to go through the experience of this amazing discovery. He spoke and everyone caught the fossil fever as he went over his amazing find in detail.  Among the various dignitaries at the media conference was the minister of science and technology, Mmamoloko Tryphosa Kubayi-Ngubane who congratulated Dr Gess and the Albany Museum for this great discovery.

As Dr Gess went through how the discovery came about, I couldn’t help but think that it was like a story from the Bible.  How a person from a humble corner of our country could stand up among the great.  As I sat in that conference room amongst those who came from the big city and all the big media houses, I thought of Waterloo Farm, in the land of Grahamstown, by no means small in the world of science, from where came a scientist who made huge discoveries in the person of Dr Gess. It was indeed a proud moment.

What was also more significant for me was Dr Gess naming of one of this remarkable discovery after Arch Bishop Emeritus Desmond Tutu, “Tutusius”. In the history of our country we know the significant role the Arch played as an educator and civil rights activist during the time of apartheid in the country. Naming the species after him resonates with me, and couldn’t have occurred at a better time in our country either. These fossil discoveries are just a stepping stone for something greater to happen for the community of Grahamstown.

Currently Dr Rob Gess is based at the Old Priest House, part of Albany Museum building complex which previously housed the National English Literary Museum. There is no reason that this could not be turned into a centre that can be an attraction. Science lessons could be offered to school children and university students on the research and it could also be a fertile ground for outreach programmes for the community of Grahamstown and the surrounds. The latter would really be an honour to the Archbishop. Furthermore it seems that a lot more discoveries will be made. The possibilities are endless!

Please send us your views regarding the idea of a Devonian Fossil centre in Beaufort Street.
We would like to hear from you. Email l.dyani@am.org.za.